You Are Not Needed Now by Annette Lapointe

You Are Not Needed Now by Annette Lapointe 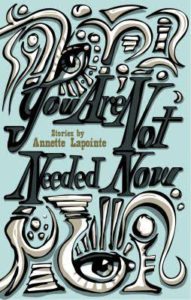 Witches and teeth, hippies and cleaning ladies, pregnancy and ghosts, tattoos and sex in a Saskatoon bus station bathroom: Annette Lapointe’s You Are Not Needed Now reads like a collection of oddities and curiosities masquerading as the mundane. This book surprises me each time I pick it up. The stylistic realism of the writing provides the reader with a foundation to stand on before tipping them into the weird. Nominated for the 2006 Giller Prize for her first novel, Stolen, author Lapointe doesn’t have to try to impress. Her writing doesn’t play tricks or try to overwhelm the reader with flashiness. The eleven stories that make up the collection, including the titular story, previously published in Prairie Fire in spring 2012, can carry themselves. If there are moments of the profound, those moments come out of the characters’ realities. There is something so utterly believable about them—not that they are “real” people, but that the level of accuracy in the depiction of their perspectives brings the reader into the clutter of their emotions. The ease of the writing grants the reader space to sit within the tension of the characters’ lives.

In “The Witch Invites Herself to Dinner,” for instance, the narrator Alana has fantasies about putting her “urban back-door herbalist”/tooth-collecting mother into long-term care so that she can reclaim Vancouver: “[My mother] settled into the Lower Mainland and I fled. I want it back…I want to have stayed and become the kind of woman who gets to spend her whole life in the Pacific urban archipelago, loving complex teas and second-hand clothes” (86; 87). Instead, she has become the kind of woman who thinks about maybe drowning herself in a bathtub while simultaneously reflecting on her fraught relationship with her own daughter. In the midst of her compulsion to collect and bag the biological bits discarded by her loved ones—her stepmother’s hairs from the bathtub drain, her daughter’s cotton balls, bloodied from thin slices made in the skin—Alana finds out she’s turned into her mother, that she is weak in the face of a desire she can barely explain. “I want all those fragments back” (91). This is a line that speaks strongly to the characters of each story. Whether one is reading about Jay, the Indigenous transgender man in “Invisible City” who has to deal with the assumed-death of his wife, his new role as single parent, and testosterone withdrawal; or about the protagonist of “Man Gave Names to All the Animals,” abandoned by her boyfriend to an apartment full of small animals, and unexpectedly rescued by a crew of punkish fetish people—the reader is invited to bear witness to the characters’ attempts to pick up the pieces of themselves and put them back together again. We watch them struggle with how to make the contradictions fit so that they might try to thrive in spite of the world that has broken them.

The final story, “Clean Streets Are Everyone’s Concern,” is the sole off-note in the collection. While the other stories explore the functional eccentricities that can develop out of human psychologies, “Clean Streets” wades into a type of absurdity that disrupts the emotional movement of the collection. The inexplicable unearthing of severed hands in thawing snow banks throughout Winnipeg, and the problem of what to do with them, is humorous in its mixture of the gruesome and the mundane, yet it misses the underpinnings of sorrow or loneliness which meld the other stories together. In “Scatterheart,” for example, Nicole’s discovery of a box containing a human heart, and the associated turn to the weird-er at the end of the story, works because of Mrs. Gamble’s continued grief over her daughter’s death. Nicole may say to Mrs. Gamble, “I think you should clean your own house, if you’re going to keep pieces of your family in it” (29), but by the story’s conclusion Nicole will learn that the repeated phrase “Behold my heart” will come to have repercussions for her too. Lapointe shows her strength here; particularizing the weirdness, and therefore making it human and reachable.

The undercurrents of lust—for home, for stability of self—that run through the collection, jostling with repeated images of British reality TV cleaning ladies and un-repented hoarding, are all beautifully, even joyfully, refuted in the penultimate story, which is also the longest in the collection. “Parrothead,” like other stories in the collection, details the complexities of both mother-daughter and romantic relationships, but with a difference. Whereas earlier characters find themselves at last satisfied or acquiescent, Amory, the protagonist here, does not. A pregnant woman with a tendency towards arson, making plans to smear menstrual blood on a door belonging to a man who won’t sleep with her, Amory maintains within her the propensity for creation, reclamation, and destruction that pulls the collection’s other characters into little pieces. If others are forced to hoard details and memories in jars and zip-lock baggies, Amory relishes in the moment of unbecoming: “Fire consumes everything. It means you have to start over. It’s more fun every time it happens” (226). Powerfully narrated in the second-person, this final “you” of the story demonstrates the possibilities of this difficult narrative perspective, implicating, as it does, the reader along with Amory. You have to start over. It’s more fun that way. Through Amory, Lapointe concludes the emotional movement of You Are Not Needed Now, revealing that contradiction can also mean wholeness.