What the Soul Doesn’t Want by Lorna Crozier

What the Soul Doesn’t Want by Lorna Crozier 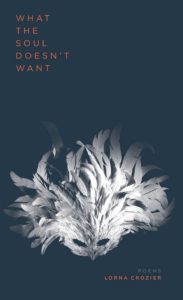 Reading Lorna Crozier’s poetry is always a surprise and a delight, and the poet does not disappoint with her latest collection, What the Soul Doesn’t Want.

In her opening poem, ‘Not the Tongue’, she speaks of sorrow with dignity and gentleness. There is neither wailing nor gnashing of teeth here; ‘Sorrow bends/the hemlock boughs/but doesn’t break them.’ (11) Crozier writes. It raises the question: do we then see grief in another light? If we look at grief as a blessing, is it easier to carry?

In her poem ‘Algorithm: The Way Out” Crozier speaks of, ‘Grief’s/a snowdrift that thickens/as you walk. Weather it.’(30) There is something exhilarating about plowing through drifts of snow to show that we can transcend grief. Her poem ‘Making Pies with Sylvia Plath’ gives an alternate view of Plath’s untimely death. Crozier sets a scene of warmth in which she and Plath work side by side in a domestic task that stops time and delays the inevitable-the poet’s death.

She examines the helplessness of aging, the fact that ‘my husband is going blind’ in her poem ‘Self-Centred’. (53) And in another, ‘Winter Solstice’, the husband feels ‘…lost. I can’t find my way’ and she begins to weep. (52) What the Soul Doesn’t Want doesn’t mask or hide feelings or try to bring reason to our questions concerning our souls. Instead the poet gives us a vision into the world of the spirit and asks that we stay long enough to see.

She also takes us on a whimsical journey opening our eyes and minds to very different views of the natural world. ‘Field Studies: The Fly” has us seeing the insect in a new way. The fly in Crozier’s deft hand becomes a multifaceted being and not something ‘You’d even use/your favourite books of poems/to smash flat’. (22) The fly has ‘five eyes’ is a ‘Miniature seraphim God send down’ to spy.’(20) She suggests too that in winter the fly goes away to study other languages; ‘a second language, maybe Sanskrit, /maybe Hebrew, maybe Crow’. (21)

The poet’s humour shines through from her signature poem ‘What the Soul Doesn’t Want’ in lines such as ‘not homemade wine wrung from turnips’ and ‘not gravity’. (27) Think about that last one. In her poem ‘Eggplant’ she writes of Eve naming the plants. Her wit lifts the poem to a new height, one that has us see poetry fly above the ordinary.

Her last poem ‘February 20th’ reminds us of Frank O’Hara’s Lunch Poems, its lists of the quotidian, of standing in the ‘what’s-for-supper grocery line’ (59) and contemplating what it would be like to tell the shopper next to her that she is a poet. What would the reaction be? It gives new meaning to the old adage of food for thought.

Crozier’s poetry is steadfast; we can rely on her to entertain, to inform and delight as she explores new corners of the language. Her grasp of taking the ordinary and creating the extraordinary is done with design; she does so with control yet leaves room for us as readers to feel welcomed into the country of verse.