From the Tundra to the Trenches by Eddy Weetaltuk

From the Tundra to the Trenches by Eddy Weetaltuk 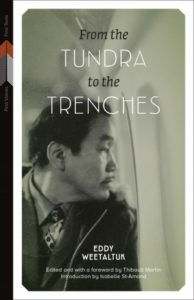 “To be frank, I have to say that the mission school, even if it was tough and I hated it sometimes, it was also like a second family for me.” (59) These words belong to Eddy Weetaltuk. His memoir, From the Tundra to the Trenches, resonates with an honesty and humour that is refreshing. His voice exemplifies the author’s resilience, his determination to survive and achieve his goals; he does so by adapting to the changes in his world. It’s as if he welcomes change in the same way he would welcome a person as a member of his family.

Eddy is Eddy Weetaltuk, his surname meaning ‘innocent eyes’. To the Canadian government he is E9-422, and like his family members and the rest of the Inuit community he becomes a number. Born on Strutton Island in James Bay, Eddy begins his life in the traditional way of the Inuit, following his parents in whale hunting and fishing. But the whales become scarce with the arrival of Europeans. In their fervour for whale oil they gradually deplete the Inuit of their source of food. In the years that follow, famine strikes the community and with it the rise of diseases, especially tuberculosis. Eddy says early in the book that he and his siblings “were taught by mother, to love everyone and be compassionate.” And it is this tenet of caring which helps the family survive. (6)

When he is seven years old, Eddy converts to Roman Catholicism. The Fathers Oblate see that the boy as a bright and eager individual and suggest that he attend the St. Theresa School at Fort George to obtain a complete education. To this his father agrees. The boy has mixed feelings about the separation. Though he enjoys learning, he misses his family. And yet at the boarding school he grows and learns, and is especially interested in animal husbandry. He also learns to speak other languages and over the course of time becomes fluent in Inuit, Cree, French and English.

His life takes a turn when in 1951 he leaves James Bay for the South. He is hesitant at first as Inuit are not allowed to leave the North. Persuaded by friends, he changes his name and enlist in the Canadian Forces and serves overseas in the Korean War. During the war he fights along with others and is treated as an equal for the men are all fighting for freedom and defending their country. Unfortunately he experiences cruelty and discrimination when he finds himself in military prison. After the war he decides to re enlist and goes to Germany where he submerses himself into another culture and learns to speak German.

Enhancing this memoir are paintings done by Eddy depicting various adventures from his early childhood to the Korean War and his tour in Germany after the war. The paintings supply a welcome addition to an already fascinating story of a young man on his life journey. Framing this remarkable story is an appendix, a forward and an introduction that emphasize the importance of Eddy’s voice. Thibault Martin states in his forward that these experiences allowed Weetaltuk to “understand the world from different perspectives, asked himself a number of questions on human nature and on the value of supposedly universal ideals”. (xxiii)

Eddy does not forget his roots. He eventually returns to the village of White Whale (Kuujjuarapik) where he helps the youth of his community. He writes in his conclusion; “I hope my story will help the young Inuit to find inspiration to strive to maintain their heritage, because it is the only way to avoid losing one’s soul.”(110) Eddy’s story has many twists and turns and as he says, “life is full of departures and goodbyes”, but he tells it with conviction in the hopes that someone will listen, that someone will understand. (82)