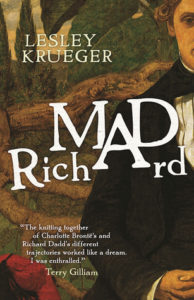 Dadd is not the only artist to feature in Mad Richard; the novel begins in 1853 with a visit to Bedlam by writer Charlotte Bronte. She is trying to determine the subject of her next book and is considering writing a social novel along the lines of the work of her contemporary, Charles Dickens, who makes several important cameos in Mad Richard. For inspiration, she decides to tour Bedlam and meet Richard. While their meeting is brief and the only point of their contact in the book, the novel goes on to tell their stories in tandem—Richard’s by recounting his youth and past experiences that have brought him to his present and tragic condition, and Charlotte’s by imagining her life as a celebrated mid-career novelist, an unmarried woman approaching forty, and someone very uncertain about what the future holds for her.

This may seem an unusual pairing of historical figures with quite different life trajectories around which to structure a novel, but Richard and Charlotte have something very much in common: they are both struggling to understand the use of art and to define themselves as artists in a world determined to dictate the shape of their lives and the scope of their artistic vision. In their meeting at Bedlam, they share their similar views on the condition of being an artist, setting the tone for the novel’s focus on dualism and what Richard refers to as “one’s own second self…as obstinate and vicious a devil as we could desire to oppose” (5). Familiar with ancient Greek and Egyptian beliefs about the dual nature of humans, and speaking no doubt to his own tortured state, he asserts to Charlotte, “I believe a strong genius is most likely antagonized by a strong beast or devil” (5). Unfazed by the madman’s proclamation, Charlotte commiserates: “I believe what you say. I believe that each artist is a divided soul. We poor sinners carry whatever talent we have like a burden” (5).

For Charlotte, the burden of her talent has resulted in an unconventional life for a woman in 19th century England. As an unmarried woman living with an aged father following the passing of her famous brother and sisters, she faces the prospect of losing her home when her father dies. Despite earning an income from her writing, she knows it will not be sufficient to sustain her. She must consider whatever opportunities for marriage are still available to her, and that means seriously entertaining a proposal from her father’s curate, Mr. Nicholls. While he is not a choice favoured by her father, nor can he compare to the dashing figure of her publisher George Smith, Mr. Nicholls appears devoted to Charlotte whose loneliness is palpable: “My sisters made the difference. Since they left me, the parsonage has fallen silent, and it is an oppressive, pulverizing silence. Life alone is a ballet without music” (190).

Charlotte is torn between societal expectations that she should marry, compounded by her own sense of isolation, and her desire to continue writing. The acceptance of Mr. Nicholls’ proposal, while certain to satisfy her desire for companionship and to continue living at the parsonage, seems to suggest to Charlotte a sort of resignation to her situation, a stepping away from her literary ambitions. In part, this turning toward marriage as an alternative to writing is fueled by a faltering confidence in her success, and by her concerns about the critical reception of her work. While she might be drawn to write about the life and regrettable circumstances of Richard Dadd or her brother Branwell for her next book, Charlotte knows that “taking on such a project would be perilous. The critics already called her unfeminine” (53). “Success was improbable,” she thinks, “continued success so unlikely that courting it seemed like hubris, like folly. Easier to reverse herself and accept the proposal she’d received from Mr. Nicholls. Stop trying. Stay home” (53). The uneasy decision that Charlotte ultimately makes to stay home, as the novel and history demonstrate, results in her untimely death, and Krueger’s subtle rendering of Charlotte as a tragic figure leaves us wondering what more might have come from this fine artist had she perhaps felt more free to make different choices.

Similar to Charlotte, Richard finds his choices—particularly regarding his artistic output—circumscribed by the people and circumstances in his life. His chapters in the novel, more plodding and less intimate than Charlotte’s, detail his adolescence growing up along the River Medway in a family of multiple brothers and sisters, each with a vocation determined by their father Robert Dadd. A man driven by his own scientific and intellectual pursuits, Robert determines that Richard will be the artist in the family. Entering his young adulthood, Richard dutifully complies, though the pressure to compete for fame and recognition with his fellow artists and luminaries of the day, including the much-envied Dickens, is overwhelming. When he finally experiences some progress and determines that he really wants to paint is “Shakespearean subjects. Keats. The liminal; one of my favourite words. Puck, Titania…fairies”(157)—Richard is compelled by his father to consider more practical, marketable subjects for his painting. It is in pursuit of this marketability that a fateful decision is made for Richard by his father: he will accompany the wealthy Sir Thomas Phillips on an extended tour of parts of Africa, the Middle East, and Europe, all with the purpose of providing, as a “pet artist” (205), paintings for Sir Thomas’s future book. The tour is Richard’s undoing, and it is where he experiences a psychotic break that precipitates the horrific act—very briefly and almost offhandedly described by Krueger—that sends him for the rest of his days to Bedlam.

If, as Richard believes, “the true artist…draws a breath and leaps for the moon” (300), Krueger’s Charlotte Bronte and Richard Dadd are such, though in both cases, had they the unfettered opportunity to pursue their respective artistic visions, the moon may have been only the beginning.

Dana Hansen is a writer, editor, reviewer, and professor in the English Department at Humber College in Toronto. Her writing has appeared in The Globe and Mail, Quill & Quire, Literary Review of Canada, The Winnipeg Review, France’s Books magazine, Australia’s Westerley magazine, and elsewhere. She lives in Waterdown, Ontario, and is the editor-in-chief of the Hamilton Review of Books.