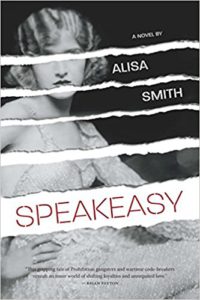 Alisa Smith’s Speakeasy tells the story of Lena Stillman’s past as a member of Bill Bagley’s Clockwork Gang of bank robbers, and her present occupation of elite codebreaker at the Esquimalt base during World War II. We are introduced to a thorough narrative of Stillman’s past through Byron Godfrey—or By God as Bagley calls him—another member of the Clockwork Gang who was in love with Stillman. He sends Stillman his journal cataloguing all their heists, and it is this journal that makes up at least half the novel. Though Stillman is the main character, Bill Bagley is the main focal point of the story.

We are first introduced to the notorious Bill Bagley through Byron Godfrey and the first impression of him is quite dislikable. Godfrey observes an interaction with him and another woman who apparently is telling Bagley that he has a child, which he blatantly denies but which Godfrey suspects is the truth. She leaves crying, and Bill Bagley says: “That woman is a whore and a liar,” and then “Didn’t you see her painted bitch face?” (14, 15). Still, the soft-spoken and mild-mannered Godfrey is charmed by Bagley immediately, even though the altercation is his first introduction to him. The reader’s very first impression of Bagley is thus one of disgust, and yet we are supposed to understand how Godfrey is drawn to him. What’s worse, Lena Stillman, an apparently strong and independent woman, falls for him as well and somehow remains in love with him even after she leaves him. Her own seduction is never fully elaborated on, and so the reader is even more confused as to Bagley’s appeal. Further, Stillman later remarks that the memory of Bagley had kept her going through all her “loveless years” (46), which reduces her own strength of character and determination.

Most of the action in the novel has already played out in the past, as told through Godfrey’s journal, and so there is no suspense, as we know the gang always gets away with the money, despite the chases and shoot-outs. We also know almost at the beginning of the novel that Bill Bagley ends up in jail and damaged from drug-use, and so the narrative loses its tension and excitement. It is only Stillman’s present situation as code-breaker for the allied forces that has an unknown future, and yet this plot is second to Stillman’s past.

The writing itself, however, fluctuates between unnecessary tangents and a few beautiful phrases. For example, when Godfrey agrees to join Bagley on a robbery that takes them to Canada, a forced backstory pushes itself in after this decision:

“Sure. I’ve never been to Canada,” I said. I had in fact never left Seattle. Its geography of strangling peninsulas and awkward lakes restricted travel. Perhaps that was why my father left my mother and me here when he moved to New York when I was boy. My mother had been a nervous and unhappy woman since that time, though she had pretended otherwise. Even as a boy I could detect her unease. She would wake in the middle of the night and scrub the house from top to bottom. A state of messiness became my comfort because it meant she had slept through the night. (17)

Here, the action of planning for the caper is disrupted by a backstory that is not elaborated on significantly more in the rest of the novel. Godfrey’s parents are not an important part of the novel, and yet they are present at a crucial part in the story, when the Clockwork Gang heads to Canada, and ultimately to Lena Stillman. Immediately after this paragraph the narrative returns to the exact plan for the heist, and so it feels especially unnatural and cumbersome. However, we do see Smith’s experience as a journalist for Canadian Geographic and Explore manifest itself in the poetic description of “strangling peninsulas and awkward lakes.” We see her passion for the West Coast landscape reappear throughout the novel, as in the line: “Cruickshank pulled the throttle back and we took off, weaving through the islands, Bill muttering them off like a rosary: Wise Island, Hall Island, Secretary Island” (51). It is Smith’s descriptions of West Coast landscapes that make the story feel whole and vital. She reinforces this sense of place with a plethora of small and accurate details, such as mentioning Brother XII’s cult location in Nanaimo, or even the history of the Esquimalt base.

Smith’s book is an interesting read for its well-researched background and interesting bits of Canadian trivia. Though the plot doesn’t feel as exciting as it could, and though it ends in a somewhat lack-luster manner—it leaves many of the narrative threads open for its sequel Doublespeak—it is still entertaining to see a bank robber operating in Canada, where we don’t normally see them in popular culture. Further, Smith’s sense of place and her detail for the coastal islands and wildernesses really pulls the reader into the novel, even if the characters and plot don’t always manage this.

Caitlin Voth is an MA student in English at UBC’s Okanagan campus where she is studying the Canadian private press. She has worked in the Humanities Data Lab at UBC, and is intrigued by how traditional books and technology come together in the Digital Humanities. In her spare time, she is learning the intricate craft of letterpress printing.