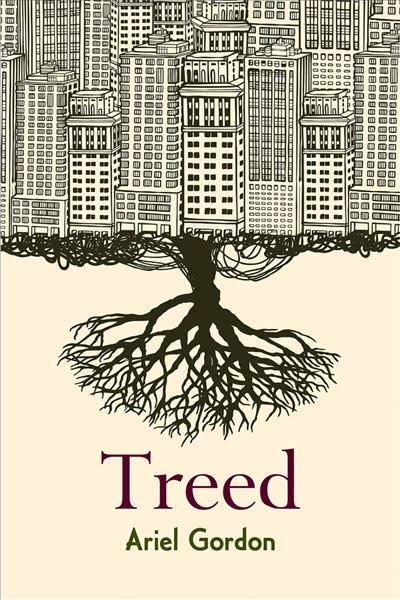 I began reading Ariel Gordon’s Treed a day or two before October’s unseasonal and devastating storm. This storm, which dropped heavy wet snow all over Manitoba, had an immediate and destructive impact on our trees, trees that had been coming to life for me in Gordon’s essays and meditations on their place in our environment and their meaning in our lives.

Gordon begins Treed with something of a personal manifesto. Reflecting on years spent walking in Winnipeg’s Assiniboine Forest, she writes, “… the best version of myself lives in its 287 hectares of aspen/oak parkland …”. (1) This despite–or perhaps because of–the challenges endured by an urban forest and the presence of those whose intentions are less than admirable. In the essays that follow, she examines “this best-version thing” (1) against a backdrop of particular trees and their stories, their long tenure on the land, and their ever more apparent fragility in the face of urban expansion, invasive species, disease, and the effects of climate change so evident everywhere. Her writing throughout is personal, informed, and humorous, though deeply committed to encouraging meaningful engagement with the environments that surround us.

Among the most compelling features of Gordon’s book is her focus on the local–be it in Winnipeg or in the other localities she visits while writing the book–and the long and sometimes unknown histories that so enliven place. In “Boulevarding,” which documents the history of Winnipeg’s boulevard trees, Gordon engages with the Icelandic-Métis writer Jónína Kirton to tell us about Kirton’s great-great-aunt Mary Ann Kirton Good who lived on land that would later become part of Winnipeg’s Wolseley neighbourhood. Kirton Good, began planting trees in and around her home some fifty years before the Winnipeg Parks Board established its program of planting boulevard trees to transition the “‘bald, wind-swept prairie’ to something that resembled ‘those finished pleasures of southern England where nature is in one of her mellowest and friendliest moods’” … (p. 78). In telling us Good’s story, Gordon maps out the essential elements of the Métis Scrip system implemented by the Canadian government after the Red River Resistance, and the ways in which this bureaucratic system served colonial interests and displaced so many Red River Métis. Colonial processes are also present in “Outage”, an essay that relates Gordon’s week-long stay in a farmhouse on a farm established circa 1907 on Treaty 1 lands.

In addition to relating these histories, Gordon writes about the flora and fauna unique to a neighbourhood, a stand of woods, a farmyard, an open field, or a mountain in the wilds of British Columbia. Of her own neighbourhood, she writes, “… I was crossing the street and passed a neighbour’s boulevard garden that surrounds a big elm stump. It had orange velvet foot mushrooms on it, which are both beautiful and edible, the wild ancestors of enoki mushrooms. If I’d been alone, I would have gone to peer at them and maybe taken a picture, but since the homeowner was outside, weeding the little plot, I just said, ‘Nice mushrooms!’” (258) Hearing this, the neighbour confessed that she had been removing them, but that she might now leave them to grow. These encounters and exchanges are the heart and soul of Gordon’s book. Indeed, they get at the “best-version thing” she opens with, the idea that we are better when we are aware of and in harmony with our surroundings.

It might be said that trees are having a “moment” in literature–think of Peter Wohlleben’s The Hidden Life of Trees, Richard Powers’ The Overstory, and Fiona Stafford’s The Long Long Life of Trees. Gordon’s book adds a fresh voice and perspective to this larger conversation. And, it makes you want to get out and take a walk in the woods!

Ariel Gordon is a Winnipeg writer whose two previous books of poetry each won the Lansdowne Prize for Poetry–Stowaways, 2014 and Hump, 2010. She is working on a long poem, TreeTalk: Winnipeg, forthcoming from At Bay Press.