Against the Machine: Luddites by Brian Van Norman 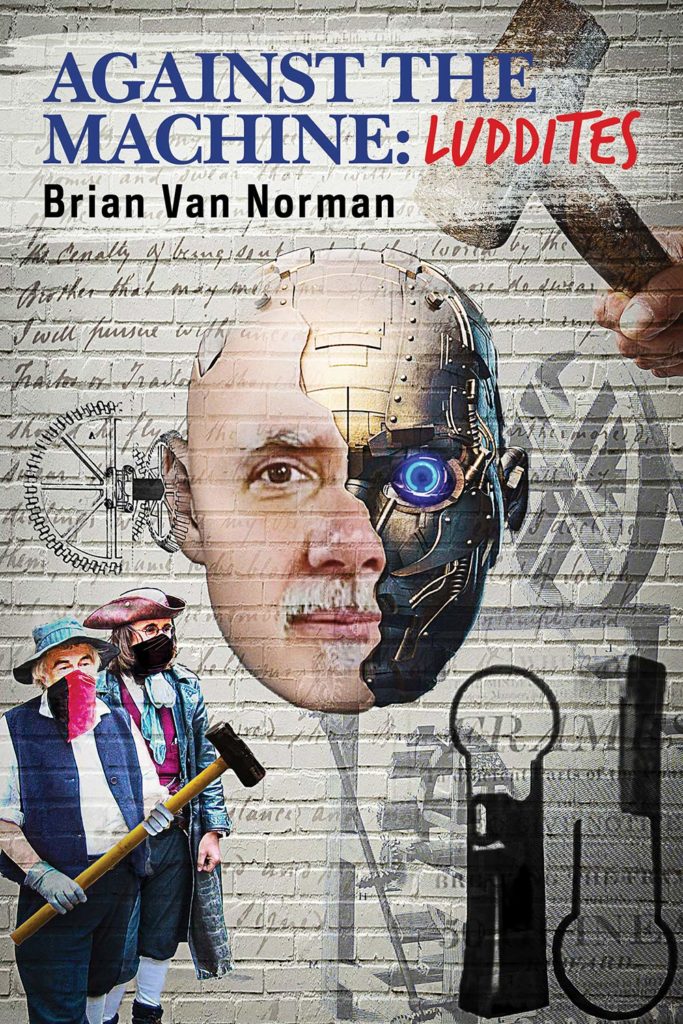 Against the Machine: Luddites is Brian Van Norman’s third novel, and is a work of historical fiction that takes place in northern England at the beginning of the industrial revolution. The book follows the birth and progression of the Luddite movement, a revolution of workers who protested the adoption of machines which ultimately threatened their jobs in factories and mills.

Van Norman uses a well-researched historical setting to tell a tale that not only teaches us about the past, but offers a window into the struggles we face today with work, class, and the very real automation of our jobs. Van Norman paints a vivid picture of the dilemma: “To keep their fast waning trade, the mill owners sought technological answers. They began to employ machines to do the work of men: gig-mills, knitting frames, power looms and shear frames, all driven by water from streams in north England’s vales. So families who had spent generations working the wool lost their livelihoods and fell into penury.” (2)

The book opens with a fourteen-year-old named Ned Lud reaching a breaking point. Frustrated with how he’s treated as a mill worker, he takes a hammer to the machines. This single act sparked a flame that had been growing in the workers, and sent a powerful message that soon had people referring to those who would fight the machine as Luddites. While the plot begins with a singular event, the tension quickly grows into a sweeping novel that leads into full-blown revolution.

Van Norman did thorough research, and presents historical details in a modern, engaging way that makes the setting believable and absorbing. He also uses fiction effectively to fill the novel with action and intrigue. There are spies, angry mobs, deception, betrayal, murder, revenge, assassination, interrogation, torture, and full scale battles. There is always some new situation escalating, and new character dynamics evolving, with twists and revelations in nearly every chapter.

The cast of characters is expansive, but largely focuses on the workers who resolve to fight against the machine. They are first introduced in John Wood’s shop, where a group of Luddites are meeting. Another John, John Buckworth, takes an oath to join a Brotherhood of workers who want to fight against the machines. Buckworth is uncertain about joining the group, but is soon convinced by his wife, Mary Buckworth, who is the only woman in the group. Her father owned a mill, so she knows the business and knows how to navigate the world of both factory workers and owners. Mary is a strong, fully-developed character who is refreshing amongst the boys’ club cast of the Brotherhood.

Over time, the Brotherhood gets more and more desperate, and begins manipulating people to join. What begins as an honest frustration and protest quickly escalates, leading to pre-meditated violence. The novel raises many questions about how people make their voices heard, and what is the right way to go about protest. Some turn to words, while others resort to violence in an effort to be acknowledged.

Van Norman does a great job of showing us this complex struggle, in which there really is no right answer. The author paints a full picture of life in northern England at the time, and all of the many groups of people affected by early machines. We meet not only factory workers, but the other side as well, the owners, and even a character responsible for delivering the machines to the mills. This complexity makes the political and social tension real, as no one singular person is right or wrong, and all of them are just trying to live their lives against the backdrop of revolution.

This multifaceted approach to the issues of the novel is what makes it so powerful, and is most evident in John Buckworth, because he is deeply conflicted and tries to see things from both sides. “‘You must examine … both sides … before you stoop to violence,’ Buckworth said… ‘These machines might become a blessing for you if society were different. There is an international economy which reaches far beyond our Yorkshire. These machines will allow us to join that economy, increase our trade. The machinery itself is not evil. Think how efficiently it works, how it does the most arduous part of a workman’s task!’” (8)

Midway through the novel, it becomes clear that this book is more than a simple history, and is deeply introspective as well. Mary Buckworth wonders, “Machines. Is that all we are? Machines to be worked then discarded?” (166). She seems to be getting at the central theme of the novel—humans against the machine. On the surface, the Luddites are fighting against the machines, but really the machines are just things. The people are really just fighting each other—the machinations of society—over resources, money, and justice.

There is an eerie moment where the book becomes almost too self-aware, and one of the characters muses something of a prophecy. “Someday we’ll have machines doing all our work for us. We’ll think the machines so important we can’t live without them! But what if they gain a mindfulness of their own. What if they learn t’ think?” (362)

This novel is a history, one that provides a window into the past. But it is also relevant to today. The themes of revolution and machines are apt for our times. This novel could easily be about robots taking our jobs in the twenty-first century, and the frustration workers feel over the way they are treated and compensated. It is this parallel between the present and the past that makes Against the Machines: Luddites a must-read in 2020.

Will Fawley holds an MFA from George Mason University where he was assistant fiction editor for Phoebe Journal of Literature and Art. His fiction has appeared in Parallel Prairies, Unburied Fables, Expanded Horizons, The Northern Virginia Review, Another Place: Brief Disruptions, and Sassafras Literary Magazine, and his book reviews have appeared in Prairie Fire, The Winnipeg Review, and As It Ought to Be.