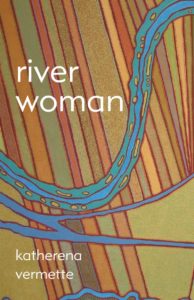 Intensely political and personal, Katherena Vermette’s second book of poems, river woman, achieves the impact and appeal of the great Canadian singer-songwriters while exploring what it means to be a woman and what it means to be a river. Under her consideration, this connection, which is the heartbeat of the book, transcends metaphor, becoming more than the clever result of an expertly-employed literary device. Instead, as the best poets do, Vermette reveals a type of mystical, permanent truth that only the foolhardy would attempt to define outside of art.

river woman is a collection centered on movement and change. Rivers are always moving, eroding the earth as they flow: “it is written / in water / carved on earth / every stone / a song / that echoes / the erosion” (61). Vermette attunes the reader to the river’s (and so the woman’s) role as shaper of the ever-changing world. Much of the conflict in the collection arises as Vermette details attempts to control and limit rivers and women: “near the lake / the locks comb her / out she roars / over them / insulted / to be so / encumbered” (36). Vermette doesn’t end on these moments of attempted control. The above line continues: “beyond them // she stretches out / into the grassland / marshes / pelicans rest / gulls call / to her slowing spirit” (36).

Beyond being interested in movement as an idea, Vermette writes poems that move. Her short lines flow down the page with the shifting momentum of a river, at times fast and roaring like rapids, and others slow and quiet like a series of meanders. The stylistic shifts in tempo and volume result in a collection of poems that, like Vermette’s debut collection, Governor General’s Award-winning North End Love Songs, is intensely musical. “riversong” captures the innate musicality of rivers and the collection: “sing your humble / melody / your wandering / water sound // cry out your song / so we can follow / that tender tune // strum the current / like strings” (51).

In this musical vein, river woman converses with, and builds upon, the work of the best Canadian singer-songwriters. Vermette writes with the spiritual yearning of Leonard Cohen: “because we are / broken / there are cracks / in us / where the dark / gets in” (28); the place-based precision of John K. Samson: “where planted trees and avenues / align our little lives / with shade / and century old buildings tell / the story of a different city / a hopeful one” (76); the reckless love of Joni Mitchell: “you break me / shatter the pieces / left / I have become / a fine dust / I can so easily / blow away” (19-20); and, in her ability to make the reader feel and understand the consequences of injustice and oppression, the integrity and conviction of Buffy Sainte-Marie: “they let us use the names of our dead / as if that means / we’re allowed to honour them” (87). The result is a collection that, like the work of these singer-songwriters, sticks with you as you go about your day to day, compelling you to experience the love and heartbreak again and again.

river woman is a political text. It opens with the following epigraph from Indigenous writer and activist Chrystos: “I assert that poetry without politics is narcissistic and not useful to us. I also believe everything is political—there is no neutral safe place we can hide out in waiting for the brutality to go away.” river woman interrogates brutality, specifically the brutality of colonization, making its trauma concrete and personal. Whether she’s writing about murdered and missing Indigenous women and girls, historical and ongoing land theft, or Louis Riel, the pain she chronicles is immediate and deeply felt. But it is not doomed to be unending. Vermette does see a pathway to justice and reconciliation, but everyone needs to be willing to do work hard for it. And they aren’t:

trolls circle their wagons
across the internet frontier
injuns! they cry
arguments fired off
with more fear than precision

Alongside the hope of truth is the hope of the innate human drive for connection, which is how Vermette chooses to end river woman: “hold me tight / close the distance / between us / keep me / warm” (98).

Before I finish, I want to draw attention to the National Film Board documentary that Vermette made alongside Erika MacPherson called this river (also the title of one of the collection’s best poems). It serves as a fascinating companion text to river woman in its examination of the complex role of the river, the bodies it holds, and grassroots responses to systemic apathy. Watch it for free here: https://www.nfb.ca/film/this_river/.

If North End Love Songs and The Break hadn’t already convinced you to preorder whatever Katherena Vermette does next, river woman should do just that. It is a beautiful and resonant book.