This Wound is a World by Billy-Ray Belcourt

This Wound is a World by Billy-Ray Belcourt 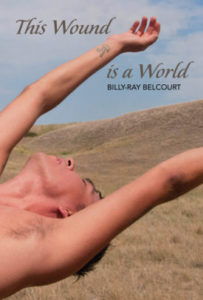 This Wound is a World, the first collection of poetry from Billy-Ray Belcourt, is an act of mourning. The text is pervaded by a sense of loss as the closing lines of the poem “Heartbreak is a White Kid” clearly show: “that our eyes stopped/ believing in what was in front of us/ was the closest we got to killing ourselves.” However, no loss is simple in Belcourt’s book; lost love or frustrated desire or even death are not self-contained but necessarily intersect with race, gender, sexuality, identity, and, ultimately, the body. The act of mourning in This Wound is a World is inherently and intensely political, this makes for uncomfortable reading at times. The poems, though, earn that discomfort through a combination of poetic craft—Belcourt writes lines and images that are clear, simple and evocative—and intimacy, the voice of the poems feels specific and real even when the body where they are located becomes unfixed and abstracted.

The body as site/cite of presence and absence is at the core of the work that This Wound is a World is undertaking. Belcourt rejects the body in these poems because of the troubling dual functions it performs in Settler Colonial conceptions subjectivity: it is at once something to be owned or possessed—the legacy of Cartesian dualism and the resulting hierarchical relationship between the mind and body—and the body as determinant. The latter is particularly true of racialized bodies, which Belcourt highlights in lines like “colonialism, definition: turning bodies into cages that no one has keys for.” Embodiment functions as a double bind for the indigenous subject in these poems. There is a sense that embodiment as conceived in Settler cultures runs counter to indigenous experience. Belcourt writes in the poem “If I have a Body, Let it be a Book of Sad Poems” that “indigeneity troubles the idea of ‘having’ a body, so if I am somehow miraculously, bodied then my skin is a collage of meditations on lone and shattered selves.” There is, however, a competing notion of presence in these poems that is spectral and haunting. When he writes “we are a people/ who proliferate/ only as potentiality” following the invocation of “a place like a reserve but not” the threat that the speaker carries for the addressee is not an embodied threat but something else, something haunting and powerful and rooted in both loss and love.

This is an instance of one of the most important moves the book makes. Belcourt’s poems position sex as a space where the body is repeatedly sacrificed or lost and through that loss of embodiment the speaking subject achieves a kind of transcendence. The speaker manages to escape the violences and destruction tied to having a racialized, gendered, or queer body in Settler society by surrendering that body in acts of love and desire. This a crucial move from away from the marking of the body as “a crime scene/ the product of older crime scenes” towards a possibility of something outside of those limitations, as Belcourt indicates when he writes “I am one of those hopeless romantics who wants every blow job to be transformative.” This rejection from the body through sex as an anti-colonial act is both fascinating and compelling. The intellectual work of these poems—crucially couched in poetic language that while rich and resonant is not opaque or obscure—rewards the reader’s attention. These are ideas that are worth wrestling with and poems worth reading.

This Wound is a World has been widely acclaimed. It has won the 2018 Griffin Prize, the Robert Kroetsch City of Edmonton Book Prize, the Most Significant Book of Poetry in English by an Emerging Indigenous Writer at the Indigenous Voices Awards, and has been featured on numerous best of 2017 lists, including being named the best book of Canadian Poetry in 2017 by CBC Books. It is an incredibly effective book—there is a reason it has one all of these awards. This Wound is a World is a book that needs to be read, and that deserves to be read. While it is at times heartbreaking, mournful, even funereal, it is also beautiful and hopeful.