Believing is not the same as Being Saved by Lisa Martin

Believing is not the same as Being Saved by Lisa Martin 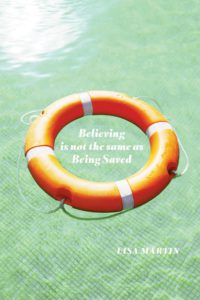 As she blends images, Martin reveals the mind’s immense capacity for association and achieves something more than metaphor. This blurring effect provides some of the collection’s best moments. In “One hundred ways to build the world” eraser shavings blur into crescent moons (5). In “Breathing in a northern forest” the northern lights become a hand moving between two buttons (85). And, perhaps most astonishingly, in “What I believe now about us then” exhaust smoke blurs into breath which blurs into fog which blurs into the cotton packing from a vitamin bottle:

The awful beauty of
exhaust rising in air exactly like exhaled breath, yet also
instead of breath. Today you will be healed by being gently
harmed and I can be transfused by what rises, cloud-like,
from poison, side-lit by the slowly rising winter sun. Fog
and exhaust, cloud and breath stretched thin as the soft
cotton plug my little girl pulled last night from a bottle
of vitamin C while you and I fought quietly like adults
pretending not to fight. (46)

Believing is not the same as Being Saved is structured in two unnamed sections. And while Martin is not writing narrative poetry, this collection bears some of that genre’s marks. The sections move through time, revolve around events, and have shape. The first section is held together by the loss of the speaker’s parents. The second by her divorce. These events make concrete the collection’s pervasive sense of loss.

The collection’s titular poem exists outside these sections and serves as a thematic and stylistic prologue. Fittingly, for a book so concerned with life and death, Martin begins her book with a death: “The summer I was fifteen a girl at my church camp / fell from the high rock where she’d been lying in the sun” (1). A male counsellor, shirtless, barefoot, hears her scream, runs to her, and carries her lifeless body back to camp. In this moment, we have the first blur of time and image: “Her death cradled to him / like the child of his own he would one day hold, and no / doubt, love” (1). The image of the counsellor running to show people the blurred death and life cradled in his arms is a shorthand for the work Lisa Martin does in Believing is not the same as Being Saved. Throughout the collection, Martin urgently carries life and death to the reader, not to provide answers or antidotes, but to do the important work of showing us the rawness of living in a world where good things end.

In Believing is not the same as Being Saved, Martin writes with confident slowness. The impact of her writing builds over the course of long phrases that, when doing their most impactful work, pay off with well-earned moments of surprise and delight that are deeply affecting. Her poems often work in the same way, beginning with a memory or detail and unfolding into the unexpected and illuminating. At the end of such phrases and poems it is rewarding to reflect on the trapeze acts of association Martin consistently and expertly performs. “Weeping Birch,” begins with a passing comment about a dying tree from the speaker’s ex-husband (“that birch / is completely dead on top, huh” (64)). By the poem’s final line (“We know this happens: lot by lot”), she’s still talking about the birch, but she’s also talking about her relationship with her ex, and all relationships.

Martin’s slow style, while effective, requires an engaged reader. Martin has not written a page-turner. There are no quick payoffs or sudden twists; no neat answers or clean resolutions. Martin brings us into tension and chooses to leave us there. Life is complex, and her collection reflects this reality. Most of the time, this reticence to resolve feels like the natural by-product of a substantial writer dealing with substantial subject matter. There were moments, though, where I doubted whether the work required of me as a reader was worth it. Where I wondered what Martin was saying beyond “it’s complicated.” These moments, however, were few, outshone by the collection’s consistent excellence.

It was 10 years between her first collection and Believing is not the same as Being Saved. I trust and hope Lisa Martin will continue her process, so, before long, I’ll have her next collection to devastate and delight me.