Book of Annotations by Cameron Anstee

Book of Annotations by Cameron Anstee 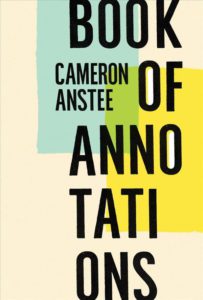 Poetry, possibly more than any other form of literature, rewards the testing of its limits. The boundaries, the margins, the limits, as spaces where language is pushed into ever more heightened and excited states, open the reader and the poet to the possibilities of language and a chance for discovery. In his debut collection, Book of Annotations, Cameron Anstee sets out to test the limits of poetry by asking how small a poem can be and still be a poem. The book is composed of short, tight, imagistic and occasionally surreal poems that concentrate the impact of the lyric poem.

The techniques that Anstee makes use of in Book of Annotations are artfully chosen, typically working through juxtaposition or play between the words as they are experienced and as they signify. The benefit of deploying juxtaposition and the indeterminacy of language in a project like this is that they don’t necessarily benefit from long set ups, there is an immediacy to their impact on the reader that rests in removing the dissonance of language and the cognitive leaps we make to function in language from the safety of context. Consider a poem like “First Movement”: “in (near) unison/ the choir turns/ to page one.” The poem, while spare, is incredibly rich in meaning. The movement of the title is first doubled to evoke both a musical movement and the physical movement of the choir, and then further complicated by the disruption of the unity of action in the first line. The observer of the choir perceives both the choir moving as one and the disunity of the individual movement actions of the choir members as they turn both in and out unison. The disunity is always present in the action, there is necessarily a first movement made, but the audience viewing the action perceives the action as unified to make it comprehensible. Anstee’s small poems, by virtue of their brevity, expose the elisions and accidents of language as symbolically rich and complicated. The poetic experience of the short verse rests in this unsettling of the things the reader would otherwise settle and the seeing/hearing of that which the reader would typically not see and hear as they are.

This experience is at the heart of concrete, list, and erasure poems. Even the juxtaposition that animates imagist poetry along with haiku and its derivatives rely on this experience of estrangement to render the image poetic. In Book of Annotations, Anstee makes effective use of each of these techniques but interestingly it is his deployment of found poetry that serves as a Rosetta Stone for the collection. When he captures the juxtaposition of two different voices in the National Gallery of Canada in “Overheard” the productive energy of this estrangement and the associated play becomes clear: “The blob isn’t painted/ everything else is—/ NO NO NO NO NO DON’T PLAY HERE!” The collision of the two voices produces something meaningful to the ears that open to hear it. It is playful, rich, and fun. It is art that disrupts the spaces of art as institution and it does so by engaging that which is suppressed.

Anstee’s work here has a number of clear antecedents, many of which are expressly identified in Part III’s erasure poems, but the most obvious debt is to Phyllis Webb’s Naked Poems. A reader familiar with Webb’s work will be able to feel the formal qualities of those poems in Book of Annotations. This is the principal problem with the book, it never seems to escape the ghosts of its influences. However, given the quality of both those influences and the work on display here that isn’t necessarily a bad thing. Indeed, given the shortness of the poems these resonances and echoes of influence and inspiration are very likely a function of form.

Cameron Anstee’s Book of Annotations is a poet’s book. The collection deserves to be read both for their content and as an exercise in the mastery of style. These poems could not have been easy to write and there is something incredibly pleasurable to be found in figuring out how they were written. Like most books that test the boundaries of poetry it is rewards the reader that takes the time to engage with the ideas it plays with. Like the best the books that test those boundaries it is a incredibly fun book to read.