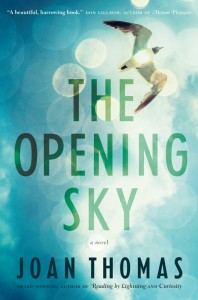 As I read Reading by Lightning, Joan Thomas’s first novel, I felt grateful to my parents’ generation for breaking ties with religious fundamentalism. As I read her second novel, Curiosity, I thought about feminist historians and the novelist’s gift for detail – that boiled egg that warmed Mary Anning’s pocket and hands, then fed her for breakfast later that morning – and the shift from religion to science that took place in the nineteenth century.

As I was reading The Opening Sky, I found myself marvelling at the resiliency of children who have difficult mothers. Granted, young Sylvie, 19, though resilient, will not be okay for another few years after the novel’s timeline ends. But she’ll be okay in part because she has her mom figured out at a very young age.

The Opening Sky takes place over six months, but an incident from the past, which is portrayed partly through the haze of a traumatized child’s perspective and is the novel’s opening prelude scene, plays a huge psychological role in how and why those six months unfold. Thomas’s free indirect style weaves in and out of omniscience and the perspectives of Aiden, Liz, and Sylvie, a middle-class family that lives in the city of Winnipeg’s Wolseley area, an urban mecca for hippies with means.

Wolseley has been immortalized in fiction by others, including most recently in All My Puny Sorrows by Miriam Toews. But whereas Toews’s Wolseley is viewed with nostalgia and fondness by Winnipeg ex-pat Yoli, Thomas’s Wolseley is portrayed with the sharpness of perspective of those who have built their lives in Winnipeg and stayed there, and is perhaps most shrewdly observed by Aiden, who sees their purchase of a house in Wolseley as buying a lifestyle package – one that has all the appearance of ethics and goodness but leaves an aftertaste of something uncomfortable that involves the very contemporary dilemmas of the socially conscious middle class. It is this kind of discomfort that The Opening Sky puts its finger on consistently, accurately, throughout the novel, and can be summed up by one of Liz’s thoughts: “How strange that Liz and Aiden are the ones who ended up looking conservative” (158).

Many of the novel’s contemporary dilemmas are neatly paraded before therapist Aiden in the form of his patients’ concerns: there is Defrag with his “eco-anxiety,” not yet recognized in the DSM and therefore currently diagnosed as general anxiety disorder; there is the mother who wants to tell her son that she wants to sleep with him, something that is perhaps not exclusive to this day and age but feels contemporary in the way that therapy allows for this kind of self-involved revelation – is in fact set up for it; there is the depressed bureaucrat who is attempting to find love via avatar.

Perhaps the most poignant dilemma erupts within and for Sylvie, who faces the difficult decision and undesired consequences of choosing what kind of birth control to use. She wants something that is both environmentally responsible and respectful of her bodily instincts – a decision with which many women can heartily identify.

Sylvie’s dilemma begins with a seemingly innocent comment from her boyfriend, Noah. Noah’s “penis-wearing-a-condom riddle (What is happy and sad at the same time?)” puts subtle pressure on even smart and confident Sylvie to go on the pill when her instincts (doesn’t feel right) and conscience (hormones affecting the fish) tell her not to (14).

Noah, like Sylvie, is deeply principled. In fact, he cares so much for the environment that he has signed the pledge of VHEMT, the Voluntary Human Extinction Movement. Imagine the conflict of conscience an accidental, late-discovered pregnancy might ignite.

Enter: Noah’s mother, Mary Magdalene, an alternative-lifestyle and parenting force to be reckoned with. It turns out that Noah is the gifted, enlightened son of the dynamic and infuriating Mary Magdalene, Liz’s ultimate “frenemy” – a perceived or actual rival whom Liz keeps on a pedestal of model New Age motherhood despite herself, and with whom Liz has shared an attraction for the same men in the past. The unfolding of the once radical, still righteous Mary Magdalene and her reaction to her son’s and Sylvie’s predicament is a fascinating study of character, the depiction of which shifts entirely according to whose perspective – Aiden’s, Liz’s, or Sylvie’s – filters the observations.

But as is the case with literary fiction, it is both what happens and how it is told that creates the magic of the reading experience. I was often dazzled by where the narrative took me.

For instance, Sylvie’s Wolseley recollections. Halfway through the novel there comes a paragraph that acts like a camera panning the neighbourhood through the lens of Sylvie’s memories and defining experiences, in which, perfectly placed, after eight short sentences that spill one after another, comes the second-last sentence that is a punch in the gut, a shock of insight that child Sylvie has about her mother: “She doesn’t like the kind of kid I am.”

This insight is for me what lies at the heart of the novel: Sylvie’s knowledge that her mother is not interested in her, or, as Aiden observes, Liz does not “enjoy” their daughter. When the news of Sylvie’s far-along pregnancy hits, Aiden has an insight similar to Sylvie’s childhood realization about her mother: “He lets his mind go slack and a question surfaces. Does Liz enjoy their daughter? And then swiftly the answer: no. And that makes all this so much harder” (70).

Aiden has these kinds of insights often, and I found his remarkable narrative moments to be the most integrated into the novel. Indeed, the workings of Aiden’s lovely mind welcome the reader in the opening of Chapter One: “Aiden hears the traffic start rumbling up Portage Avenue, but he’s still his night-time incarnation, and when his eyes open again, he catches sight of meaning darting across the skylight like a bird” (7). There is something whimsical and articulate about this description. In Aiden we glimpse the integration of the unconscious with the conscious, perhaps because he has a certain level of self-awareness from his training as a social worker, but also likely because of his natural tendencies and way of being.

Liz’s standout narrative moment takes place one night when she can’t sleep and wanders downstairs to rest on the couch, where she finds herself asking the quiet, dark house some big questions. The scene seems to be a key to Liz, but one that still eludes and haunts me. It unfolds in this way: “Where do I go wrong? she asks the house. It takes the house a minute to respond. In your haste, it says at last. … Sometimes what you want is not what is best. … What do I do right? she asks the house. You’re hasty, the house replies. Nobody can make a cake without breaking eggs” (112).

Liz appeals to the house, not God, which suits her, and perhaps the secular contemporary middle class. Her view of the world is filled with assessments of material objects, which matter to her a great deal. She notes that her toenail polish was a mistake, too co-ordinated, for a party she attends; she disguises her lunchtime yoga class by bringing her mat in her laptop bag; she imagines viewing her home – with high praise – through the eyes of new visitors. She has great taste, we hear, from her viewpoint, over and over again. She cares what others think, Aiden observes, whereas their daughter does not.

Liz is a high-functioning person with a missing link; where there should be empathy or what some might call a maternal instinct (which Aiden has, which Sylvie is probably worried that she doesn’t have), Liz has instead a selfish gene. She finds a way to get her needs met and prizes self-actualization over self-sacrifice, even when it comes to Sylvie, who, at a formative age, gets cracked like an egg as her mother sets her sights on one of those alluring cakes. But though Liz is the character easiest not to like, she is portrayed with generosity and care.

The Opening Sky is filled with the vague and not-so-vague discomforts of contemporary dilemmas. But it is also filled with old, time-honoured predicaments such as the rivalries among women, even New Age, thoughtful women; and accidental pregnancies, even among principled, thoughtful youth.

I would also point out that there isn’t a sentence out of place. Open the book anywhere. For instance, even the short statement, “Liz carved the turkey because she was better at it,” speaks volumes about Liz’s opinion of herself and of the power dynamic between Aiden and Liz. Who cares who carved the turkey? In this case, the person holding the knife does. Reader beware.

It strikes me that Liz, Aiden, and even Sylvie, could be, in a parallel universe in which fictional characters come to life, the intended readers of this novel. Indeed, Wolseleyites of the world tend to read literary fiction. Aiden might have picked up a copy while browsing through his favourite music at the local independent; Liz would have augmented her To Read List after the GG nomination; and Sylvie might have stumbled upon a paperback version in a Little Free Library on a Wolseley neighbourhood boulevard a few years down the road.

What would the mirror say? For many readers will be mash-ups of Liz, Aiden, and Sylvie. Reading The Opening Sky is reading our lives in a way that hits home all the more closely because of the novel’s contemporariness.

I finished the novel aching for Sylvie, baffled by Liz, fond of but frustrated by Aiden (for his ability to be “stupid-on-purpose,” as Sylvie puts it). I found myself considering selfishness, insecurity, idealism, and the devastating ease with which psychological trauma can occur. I thought about limitations of character. I felt the danger of secrets. I put faith in resiliency. ♦

The Opening Sky won the McNally Robinson Book of the Year Award and was shortlisted for the Governor General’s Literary Award for Fiction.

Sara Harms lives with her family in Wolseley.