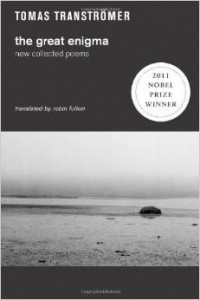 There is such density in Tomas Tranströmer’s poetry, and such a wide range of images and concerns.

It may be best to focus on several representative selections from different poems in this fine collection of his poetry and prose from 1954 to 2004, a half century of his work.

The opening poem in the Baltics sequence collected in The Great Enigma presents an arresting image. The stanza containing this image bears reading aloud a number of times. It is representative of the stirring perception and mundane precision that characterize much of Tranströmer’s poetry. In this poem he describes the work of his grandfather, who was a ship’s pilot “before the age of radio masts” and ship-to-shore communication. At that time a pilot was expected to know the topography of the seabed like the back of his hand. His grandfather’s ship sets out at night in thick fog navigating “half blind ahead,” until suddenly, “At one single stride / the cape emerged from the invisible and was right on them.” His grandfather’s “eyes read straight into the invisible”:

“We’re just here” is not sotto voce, or even a whisper, but surfaces in a vast, almost prayerful silence. The Lord of those psalms may have been his grandfather’s co-pilot, but he faced the most dangerous choices alone, and with perfectly balanced care for the ship and for everyone aboard. It is a precision and care that Tranströmer has inherited, or come to on his own.

A few pages later, in the prose introduction to the fifth Baltics poem, Tranströmer describes a strait “swarming with jellyfish today for the first time in years.” Then he surprises the reader again with a sudden shift from the prosaic to the revelatory: “if you take them out of the water their entire form vanishes, as when an indescribable truth is lifted out of silence and formulated into an inert mass.” His description of this process is the reverse of the transformation he has just presented.

The sixth Baltic poem opens with the story of how his great-grandparents could not care for his beloved grandmother Maria, and abandoned her to strangers after sailing “from island to island” asking “Who can take Maria?” She becomes “an unpaid servant” in a household where “the mask of piety cracks,” as false piety always will. However, she develops the unusual gift of sharing precognitive communication with young Tomas:

A five-year-old boy receives a message from his distant grandmother that she is dying, half an hour before a phone call from her hypocritical masters. In Tranströmer’s hands, the miraculous lines ring utterly true.

In “Citoyens,” from The Truthbarrier, he dreams of Danton and Robespierre. His cautionary description of how “Robespierre spends a careful hour each morning on his toilette” recalls the civilized manner Roberto Calasso describes, in which “The bigots of philanthropy had their neighbors’ heads cut off with extreme sensitivity” in his magisterial book Ruin of Kasch. In Tranströmer’s poem, it is night, “And—as always in dreams—no sun.” Is this true of everyone’s dreams? In the Parisian night of the Great Terror, a rarely presented truth about the nature of human betrayal surfaces in the final unfinished line of “Citoyens” . . . as unfinished, and true, and present as the terrible history of the 20th century:

The chords of a piano in “Schubertiana” open with an accompanying view of New York City from above. The poem’s final lines compress so suddenly that I stopped reading in order to put on a Schubert sonata, and then read the poem again:

A generous selection of Tranströmer’s prose also appears in The Great Enigma. “How the Late Autumn Night Novel Begins” opens with the narrator’s edgy disembarkation alone from a ferry in darkness at an undisclosed location. He passes a night that would try other men’s souls, hearing “someone knocking in a wall, someone who belongs to the other world that was left behind here, knocking, wanting back. Too late . . . The other world is this world too.” For a moment, it seemed as if Tranströmer might be moving toward something eerie and potentially fatal, such as the potentially fatal risks Odin took in order to gain the power of poetry. But in the morning, the narrator wakes to “A crawling stack of roots. Stones with faces. The forest is full of abandoned monsters I love.”

Tranströmer’s favourite poem appears in the collection For the Living and the Dead. It is four lines long, and quietly awaits the reader about three-quarters of the way through this collection:

It seems to be a quiet little poem on first reading. But, is only her voice stilled? Do the eyes of another also follow the gladiator? Does the other follow her into the arena? Is she free? Is the other free? Who is the other? Does the gilt frame strangle only the picture? Did the Nobel Prize Committee spend much time mulling over this poem?

The Great Enigma shares the effect of other enjoyable enigmas, and calls for rereading. I will be rereading Robin Fulton’s translation until his 2011 accusation is settled. He has claimed that in another Tranströmer translation by Robin Robertson, “An excessively large number of Robertson’s lines are identical to mine in my Tranströmer translations.”
http://www.the-tls.co.uk/tls/public/article791993.ece

There is something grave, yet often light, in Tranströmer’s work. A peculiarly Nordic light, and darkness. He’s plainspoken, yet intricate at the same time. Complex, yet accessible. I cannot think of another poet like him. He has something of Dickinson’s capacity for deceptive simplicity that opens to profundity. Muldoon’s fearlessness, without all the rest of it. William Carlos Williams’s clarity. Something like Milosz’s moral fibre, and Denise Levertov’s goodness.

My gratitude to my colleague Peter Farncombe, whose editing much improved this article. ♦

James Edward Reid is a Canadian writer whose forthcoming publications will appear in The Sarmatian Review (Houston), Paideuma (Orono, Maine), and the ATR (Chicago). www.jamesedwardreid.ca