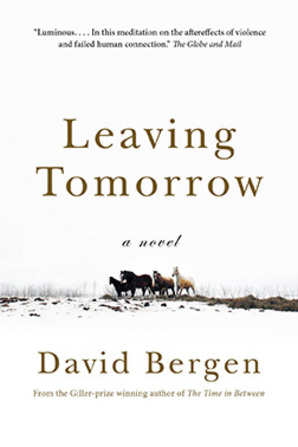 Aptly, the cautionary epigraph from Ecclesiastes (12:12) with which David Bergen frames this, his most explicit and richest inquiry to date into the fraught relations among living, reading and writing, love and lust, mind and body and human being, advises both the writer and the reader of the dangers of books: But beyond this, my son, be warned: the writing of many books is endless, and excessive devotion to books is wearying to the body.

That admonition provides one entrance into this age-old and beautifully, sparely told contemporary story about leaving and returning home, and the arc of experience that shapes the time in between. Looking back nearly a quarter of a century across Bergen’s career, another entrance to Leaving Tomorrow is through the title of Bergen’s first book (of stories), Sitting Opposite My Brother (1993): the intimate lives and deaths within families – including, vitally, brothers’ often opposed lives, life stories, sinew and soul – have long been Bergen fictional familiars, and in Leaving Tomorrow he returns to this home ground with a new version of a story at least as old as the Bible that is never far from hand in his fiction.

Tellingly, and as with any good novel, a plot summary will only reveal so much; and so, like Bergen’s narrator a little more than eight pages into the novel’s first section – subtitled, advisedly, in a clear admonition to pay attention to narrator and narration (calling, as well, to Timothy Findley’s narrator, early in The Wars) – “I am telling you this” (11): Arthur’s first-person story lies not only in what or how he says and writes, but also in what he does, why he does it, and what the untold consequences are of his actions – “untold,” that is, to him, until his experiences bring him home because and as he tells us his story. Another way to put this: Arthur’s story lies (in both senses) in its (and his) telling, and that is his doing as well as his undoing. And take heart: the difference between this clotted review and Bergen’s prose is that the latter, for all its complexity, is simple and transparent.

As with all Bergen’s fiction, but more explicitly in recent novels, Leaving Tomorrow agonizes over the pain and passion and stark ambiguity that many of his characters confront when the life lived clashes with the life dreamed, hoped for, or imagined. That conflict informs Arthur’s (the protagonist and narrator’s) progress from the beginning of his life. Arthur is the younger son of an American ranch hand whose life is intuitively attuned to the horses he loves, breaks, and works with on a spread outside of Calgary, and of his spiritually inclined missionary mother. These twinned and opposed, ardent and fervent forces, also familiar to Bergen’s readers, play themselves out through the vocations of Arthur and his older brother Bev. Arthur, precariously and precociously articulate, excessively verbal and cerebral, incipiently artistic (and, briefly, almost autistic as a child), dreams of a writer’s life lived abroad, of a France inhabited by the Proust, Baudelaire, Stendhal he reads. Bev, tactile and taciturn, as sturdily physical as Arthur is exotically imaginative, instinctively flees the ranch to fight in Vietnam, and returns with his mind broken. Arthur, torn between behaving as his brother’s keeper and his brother’s other – that is as much as I’ll reveal – leaves for France, where he lives out the pitched battle between his soul’s and his body’s longings in a vivid and instructive latter-day incarnation of Blake’s Innocence and Experience before returning to Tomorrow. Both brothers’ lives are further framed and deformed, like their parents’ lives, by the early drowning death of their sister Em; and all of Bergen’s characters, as always, are alternately haunted and inspired, driven and daunted, by a sexuality by turns demonic and incestuous, spiritual and sainted, lustful and loving, erotic and immediate, remote and unattainable. No contemporary writer I am aware of is so keenly attuned to the fitful tensions and torsions of his characters’ thwarted or fulfilled erotic vocations.

Arthur’s intense longing for a wider, more fulfilled, more impassioned life is his bane, and Bergen is intent on poising and exposing Arthur’s yearning over against the mundane, the banal, the quotidian, but also – and this is why the novel aches – intent as well on allowing Arthur’s alleged excesses their due, on engaging readers with Arthur’s real dilemmas. So, for example, Arthur’s relationships with several prototypical women in France – with a prostitute; with a waitress who sees him and herself for what they are, incompatibly different; with his impossibly idealized French girl, who bursts his bubble when it’s revealed she’ll marry an older lawyer – serve to illustrate both the destructive naiveté of his unregulated desires and their very human provenance. The same is true for Arthur’s ambiguous sense of his responsibility for Bev. And the same is true, ultimately, for his sense of the clash between literal and literary, between ars longa and vita brevis – except that in Bergen’s fiction, characters often want both and cannot have them.

One of the many virtues of Leaving Tomorrow is that it ends, as it must, twice: first with Arthur’s literal return to Tomorrow and his family; and last, just before his return, in France, at the end of his stay there with the family he has lived with while he teaches the young boy English, and where, in character, Arthur longs (but does not act on his longing) for the boy’s mother, and is appalled by the father’s casual and carnal, laissez-faire views and behaviour. The novel ends twice, yes, but it ends less bleakly, with more hope than some other Bergen fictions, as if to suggest that yes, life is difficult and ambiguous; yes, we are always tempted; yes, there is finally only one (and one’s) life; and, but, yes, life is inevitably various, and one must choose and then live one’s (one) life; and, but – as a character, a writer in a Bernard Malamud novel (The Tenants, 1971) puts it, “Art is the glory and only a schmuck thinks otherwise.”

In closing, therefore, an enticement: here is the opening paragraph of Leaving Tomorrow:

To be an individual, to make one’s way, to shape and form oneself in a unique manner; to live forever, to love and be loved, to know what I want, to rise and fall and then rise again, to speak the truth. This is essential. (3)

Canadian literature scholar Neil Besner is provost and vice-president, academic at the University of Winnipeg.