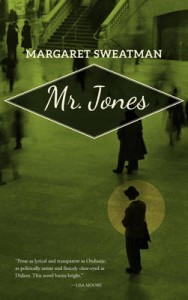 Margaret Sweatman’s fifth novel, Mr. Jones, is an atmospheric tour-de-force. The winner of the most recent Margaret Laurence Award for Fiction, Mr. Jones employs the conventions of a Cold War spy novel, engaging the big questions characteristic of the genre: loyalty, ideology, nationhood. However, whereas the stakes of a traditional spy novel can seem remote, Sweatman employs these conventions to bring the consequences of the spy novel out of the public realm and into the domestic one.

The novel opens in 1953, on the evening that Emmett’s superior, Bill Masters, informs him that the American State Department has requested that the RCMP investigate him for Communist affiliations. As he finishes informing Emmett of the forthcoming investigation, Bill asks him, “You’ve got nothing to hide, do you, Emmett?” (20). This question, coming as it does after a dinner party during which every tension seems magnified for not being spoken, carries with it a certain amount of aggressiveness. Its impact and the impact of Emmett’s bland response, that everyone has something to hide, take up much of the novel’s energy. Of course, even this early in the novel’s plot, Emmett and Suzanne have things they want to keep private. Their shared infatuation with John Norfield, which dates back to their university days, and their participation in a left-wing reading group seem the most pertinent. Neither of these points of fact is particularly secret, though.

The supposedly public concerns of secret affiliations and disloyalty are most poignantly evident in Emmett, Suzanne, and Lenore Jones’s domestic tensions. The story – so widely circulated that Lennie hears it from one of her schoolmates – that Emmett Jones is a Communist spy carries the weight and force of truth regardless of its actual veracity. Suzanne is driven to suspect everything that Emmett knows and how he knows it. She sublimates the tension in their marriage by questioning what the Prime Minister thinks of them and what is being said of them in the circles of power.

Midway through the novel, the narrator observes a change in the way Emmett Jones sees himself. At the conclusion of a three-month-long public investigation by the RCMP, Emmett stops thinking of his life as a thing to be lived and begins thinking of it as a story to be told and interpreted: “If the interrogation had made Emmett feel rigid and apprehensive, its vague conclusion left him adrift. A space had opened around him. In telling and retelling his version of events to Gemby and Morton as they probed into his life, his friendships, his beliefs, he’d incidentally manufactured a fiction. And now his life consisted in how it might be told rather than lived” (234). That Emmett sees his life as plotted rather than lived has consequences not only for how he sees himself but also for how he sees his family.

Emmett spends much of his time with Suzanne and Lennie watching them. This is true of his presence from the very first sentence, which reads: “Emmett Jones watched his wife, Suzanne, in evening sun so strong he couldn’t make out the gold stitching on her yellow dress, though it was a detail he’d memorized” (11). Emmett’s watchful attention separates him from his loved ones, even as it allows him to know them better. In this opening scene, for example, he notes that Suzanne is angry, although “her fury [is] apparent to him alone” (12). This watchfulness, though, particularly as it pertains to Suzanne, signals the emotional distance between the two: “Frightened of the possibility of nuclear war, very frightened that he couldn’t protect them, frightened that whatever he had done to redeem the value of his life, to make his existence extraordinary, it wouldn’t matter, his courage and ambitions were an inconvenience to her, she needed him to do nothing more than be the banal facilitator of her pleasant life, the one she got instead of John Norfield” (326).

As the years pass, he becomes more and more attuned to Lennie, and, similarly to the way Emmett’s watchfulness signals his distance from Suzanne, it signals his inability to know Lennie: “When he woke up in the night, aware that he needed to be careful not to disturb Lennie at the end of the bed, he could hear her, could hear her wakefulness. ‘I don’t trust you,’ she had said. Maybe she was too intelligent, over capacity. Too wary. How easily she had adopted John’s cool accent. Today she was seven years old. How many hours had Lennie been awake? He did the math” (304).

Lennie’s perspective – preternaturally wise and discerning – provides a counterpoint to her parents’. While Emmett must be cured of the “naïve belief that his country would not purposely set itself against him” (308), Lennie knows from early childhood that “[t]hings happen in patterns” and that “she will be betrayed often in her whole entire life” (314).

Herbert Norman’s life and suicide haunt the novel. Emmett meets Herbert – who was, in fact, a Canadian diplomat and historian and whose life conforms broadly to the facts presented in the novel – in Japan. Although Emmett is warned against getting close to him, the two strike up a friendship of sorts. This friendship, because Herbert too is the subject of a protracted investigation instigated by the Americans, is used as a barb against Emmett. Indeed, Norman’s suicide is the ground on which suspicion of public disloyalty is conflated with prurient speculation about whether Herbert and Emmett had a sexually intimate relationship: “People’s suspicions of him,” after the news broke that, like Herbert Norman, Emmett Jones had been recalled to Ottawa from Japan on suspicion of disloyalty, took on “ a palpable sexual quality. Jones’s wife and daughter, his knowledge, his work, his entire life, seemed like a failed disguise” (278). This sense that everything Emmett is and has worked toward is a failed disguise contributes to the pervading anxiety in the novel about the unknowability of another person.

The unknowability at the core of each of the characters clashes against the transparency demanded by the various systems in which they are enmeshed. This betrayal, perpetuated against the state by all the characters, fuels the paranoia that animates the novel from the moment Bill Masters asks Emmett Jones not whether he has committed an act of treason but whether he has anything to hide. ♦

melanie brannagan frederiksen’s poems and book reviews have been published in Prairie Fire, The Winnipeg Free Press, The Waggle, and The Winnipeg Review.