The Exile Book of Native Canadian Fiction and Drama

The Exile Book of Native Canadian Fiction and Drama 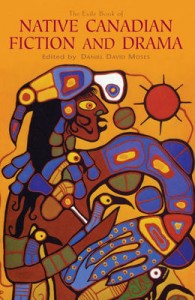 In his introduction to The Exile Book of Native Canadian Fiction and Drama, editor Daniel David Moses expresses the hope that the work of First Nations writers in Canada today has reached the point where it can be read on its own terms simply as literature, without requiring any special “categorization” (xv). The “best” First Nations writing, he says, touches “those emotions and experiences that we think of as universal” and “recognize as literature” (xv). This fine collection of fiction and drama meets such expectations and puts to rest any uncertainties that its editor may have about its reception in the larger literary world.

Moses, a Delaware writer from the Six Nations in Ontario, is a veteran anthologist, having co-edited with Terry Goldie the Oxford University Press edition An Anthology of Canadian Native Literature in English. The book has been in print for some twenty years and has now gone into its third edition, for good reason. It is a comprehensive text featuring predominantly fiction and poetry but with a diverse range of other forms such as traditional song and orature, essay, letter, memoir, journalism, and drama. Sixty writers from about 25 First Nations are represented in the selections.

This new anthology is a more modest collection of work, focused exclusively on fiction and drama that has been previously published (and some anthologized) within the past twenty years or so. Half of the fourteen writers represented here can be found in Moses’s earlier anthology, and all are established writers, or well on their way to being so. For example, two of the newer (and younger) writers that Moses introduces, Manitobans Niigaanwewidam James Sinclair and Katherena Vermette, already have healthy publication credits to their name and are known on the Manitoba scene and beyond.

Regionally, the collection is weighted toward writers from the West and the North, with just three writers from Ontario (Joseph Boyden, Thomas King, and Moses himself), and one from Quebec (Lauren B. Davis). There are none from Atlantic Canada, a choice that supports Moses’s claim in the introduction that his selection is “idiosyncratic” (xi). On this point, it should be added that only four of the writers are women (Davis, Yvette Nolan, Eden Robinson, and Vermette). Clearly, Moses had criteria other than gender or region in mind. He does not explain his rationale; however, it becomes evident in the reading that Moses is most interested in works that politicize the subject of the writing, whatever that may be. Without exception, each writer in the anthology tangles with questions of power in different contexts including culture, gender, history, sexuality, and so on. This keen and unapologetic level of engagement with the political gives the anthology its strength.

The first entry in the collection, for example, Tomson Highway’s story “Hearts and Flowers,” relates the bittersweet experiences of an eight-year-old Cree boy from northern Manitoba whose personal triumph at a small-town music festival takes place on the same day that Parliament grants the franchise to Native people in Canada. The day was March 31, 1960 – on the one hand a day to be celebrated; on the other, a day to be remembered in association with Canada’s shameful racist past. For the boy, Daniel Daylight, it is the day that Indian people are finally recognized as being human. He had been taught to believe by his grade three teacher that Indians were not human, “not according to the government” and not by law (12). Young Daniel knows that his transcendent piano performance changes history. He knows it, he says, because he “played it” (19).

Several stories concern family and cultural breakdown. In “Rat Medicine,” by Davis, an Aboriginal woman confronts her abusive white husband after rats invade their farmhouse and property. The rats, however, turn out to be the kind that only she can see. According to her wise Auntie Betty, the invasion is the result of the husband’s “bad sickness” (27). Auntie Betty prescribes rat poison as medicine and tells her niece to “go back to the old ways” (27). In Robinson’s story “Queen of the North,” the 16-year-old character Karaoke uses medicine of her own grotesque devising to confront her abusive uncle, though her actions have unintended consequences. The community, in Richard Van Camp’s comic love story “Love Walked In,” takes action to identify abusers and end their predatory ways, while the relationship between the teenage lovers in the romance narrative points to the start of a new, healthier cycle in the life of the community. In Sinclair’s story “Trickster Reflections,” other levels of reality figure prominently when a young Aboriginal man is shadowed at every moment by his own personal trickster, a malevolent coyote-like character who turns the man’s life into a psychological hell.

The teenage narrator Sue in Boyden’s story “Born with a Tooth” has a different kind of relationship with an animal character, this one a timber wolf from the wilds of northern Ontario. The wolf visits her at night over the course of two winters until he is caught by a local trapper. His death coincides with the arrival in the community of a white teacher from Toronto, who soon develops a sexual relationship with the girl.

The coyote also makes an appearance in King’s story “Coyote and the Enemy Aliens,” but here he is a character of political satire. He becomes an unwitting agent of the Canadian government during one of Canada’s darkest moments, the mass evacuation of Japanese Canadians that began in 1941. Coyote will later find a new job in Los Alamos, New Mexico, where he goes to “help those Whitemen . . . make the world safe for freedom” (177).

Coyote is not a character in Alootook Ipellie’s “After Brigitte Bardot,” but we sense his (or her) animating spirit in the actions of the European animal-rights activists, led by Bardot, who arrive in the Canadian Arctic to prevent the Inuit people’s “senseless slaughter” (157) of baby harp seals. The story takes a humorous turn when the narrator relates a dream about a strange metamorphosis that occurs between Bardot and a baby seal.

The remaining three fictional entries in the anthology include Moses’s “King of the Raft,” a story about boyhood and desire, written in a style reminiscent of Sherwood Anderson; Vermette’s “what ndns do,” a story about a young woman’s conflicted memories of a relationship just ended; and Robert Arthur Alexie’s “The Pale Indian,” an excerpt from a 2005 novel set in the Northwest Territories about a man’s search for family and identity.

Of the 15 selections, just four are plays, yet they make up almost half the book. Apart from Nolan’s play “Scattering Jake,” a conventionally written short play on death and ritual set in present-day Toronto, the plays are more varied and experimental in form than are the stories. Most of the fiction, with the exception of “Trickster Reflections” and “Coyote and the Enemy Aliens,” are realist works, including a few with a twist of the otherworldly or the magical. The plays also delve more overtly into history and myth.

In the 70-page “Please Do Not Touch the Indians” by Joseph Dandurand, for example, the main characters are Wooden Indian Man and Wooden Indian Woman, who sit in tableau in front of an American gift shop when the play opens. They soon come to life and engage with their spirit cohorts, Sister Coyote, Brother Raven, and Mister Wolf, who join the tableau whenever a tourist comes along to photograph the scene. In each of the twelve scenes, the characters re-enact their stories going back through various periods in America’s violent colonial history, from first contact to the present.

Floyd Favel’s “Governor of the Dew” also deals with a cultural encounter. The play is an evocative romance, with several embedded narratives, about a fateful meeting between two young lovers, one Cree and the other French. “I returned her gaze,” says Young Beaver. “Could she love me? What would my tribe say if I brought her home?” (256). The writing is densely poetic and musical, and it is one of the only selections in the book that makes use of languages other than English, in this case, Cree and French.

The second work of his own that Moses includes is “The Witch of Niagara,” an affecting and beguiling tale about a village near Niagara Falls that has been plagued by sickness and death. The people turn to an Old Man for deliverance, before Thunderer, the Iroquois god of rain, enters the fray.

Native Canadian Fiction and Drama is a strong addition to the ever shifting Canadian literary canon, effectively presenting the depth and artistry of the work being done by Aboriginal writers in Canada today. Here Moses is essentially taking stock. The bulk of the collection, inadvertently or otherwise, features writers who were born in the 1950s and 1960s, which puts them in their late forties and fifties. We are grateful for the work that has already been produced, but clearly there is much more to look forward to from all the writers included. If Moses had had more than 375 pages to play with, we might have seen more work set in urban contexts, from women, and from writers in Quebec and the Atlantic provinces. Perhaps, down the road, in future editions, we will see the inclusion of works that are more varied or experimental in form or style. In the meantime, readers of this latest anthology will surely be satisfied. ♦