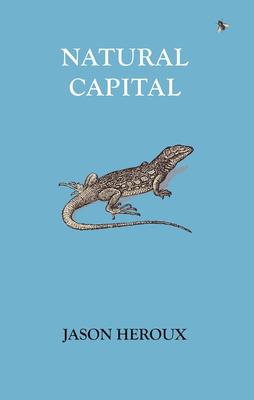 With the release of Natural Capital, Heroux doesn’t seem in any hurry to take a tangent; he continues to construct magical microcosms with this technique. Heroux’s poetry is deceptively simple. We are able to touch down occasionally in a kind of alternate reality with wacko occurrences and ideas in the poems. But the footing is tentative at best. “And there’s a joy that makes the ants on the sidewalk panic / like dull black sewing needles that have eaten their threads” (50). He leans heavily on the imagery, as well as the reader’s own natural capital to make such lines resonate. Yet a zigzagging of a bunch of bloated panic-stricken ants evokes what?

In the poem (“A Joy”), from which the above is quoted, he stretches the meaning of joy to a figurative Snap!: “almost everything// that happens or doesn’t happen is a joy” (50) undercuts meaningfulness like those rather silly two-kinds-of-people-in-the-world declarations.

Still, he tries to re-invent the world in his poetry exclusively through images. In “The Art of Sleeping Pills” about a friend’s death, the poem consists wholly of images (excepting four statements of fact) like “ants loot crumb-size televisions from/ the earth’s store” and “the grass blades grow like green/ receipts from the earth’s cash register” (45).

Heroux is a virtuoso of imagery, but as in musical composition, poetry demonstrates its strength in contrast, modulation and dynamics. I often get the feeling I’m drowning in these poems, and the flotsam and jetsam to which I reach to save myself prove to be apparitions. “In the suburbs of the holy city clouds drift overhead/ like eighty-year-old ballerinas crossing the street” (24). Are these frail filigree ghost figures “en pointe” or gnarly bone racks hobbled by years of performances? He continues: “teenage grass blades listen to lawn mower music,/ housebroken sunbeams doze on the floor” (24). The challenge to the reader lies in processing all these mental pictures into some coherency. Heroux’s point turns out to be vision: how half views and skewered perspectives go unrealized as he walks down the street trying to take it all in order to re-write it – stet! – on paper. There is less an attempt to precisely communicate ideas that to paint messy pictures to flood the reader’s vision. Fortunately, “clouds rub against the/ sky like white erasures” (42).

Andrew Vaisius is a childcare worker who lives in Winkler, Manitoba.