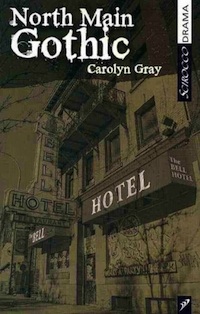 Playwright Carolyn Gray’s North Main Gothic follows the story of Ian Trelkovsky, a Winnipeg bureaucrat and slum landlord, who takes a nightmarish journey into the underground life of his city. His journey begins one night with a car accident on Winnipeg’s Main Street when he swerves to avoid hitting a woman being chased by a sinister figure in a hooded robe. He misses the woman and crashes his vehicle but then is mugged by the very woman, Stella Dupree, whose life he saved. Stella preys on the semi-conscious victim, dragging him out of his car and stripping him of his money and belongings. This opening scene establishes the play’s terrain, a predatory urban landscape where people are exploited by impersonal social forces and victimized by their own personal weaknesses but left to fend for themselves. “You try so hard, and everybody and everything’s working against you,” says Joe Strong, a Main Street lifer who is barely keeping it together while sometimes taking his meds (22). Trelkovsky survives the accident and the mugging but vows to exact serious revenge on Stella. Thus begins his descent into the North Main underworld.

Trelkovsky launches his search for Stella at one of the several seedy hotels featured in the play. There he meets Janice Brook, a prostitute who turns out to be on an undercover assignment for the National Film Board. Janice is working as a boom operator on a documentary about prostitution while gathering stories, which she records on her phone (27). Her NFB assignment conveniently provides Janice with rich material for her own independent documentary. In the course of plying her trade on the street, she has stumbled upon the remarkable discovery that beneath the streets of North Main lies a network of underground tunnels. “Around 1900,” she says, “prisoners who were to be executed were held underground in cells that connected by tunnel to the old City Hall . . . and to other North End landmarks such as banks, theatres, and hotels” (34). Rumour has it, she goes on, that the catacombs have recently become the site of an underground casino, complete with power rerouted from the publicly owned Provincial Power corporation. Trelkovsky and Janice shortly make their way down into the catacombs and discover the fabled casino. They also find Stella, who is mindlessly plugging toonies into a VLT.

By this point in the story, it becomes evident that the play’s reality is a heightened, absurd, displaced version of the present day. The play depicts a darkly comic gothic world racked by casual violence and injustice, but one that is sadly not that far removed from our own world. It satirizes a society and a system of government corrupted by capitalist values that allows the rich to become filthy rich and the poor to remain dirt poor. Public corporations and provincial government bureaucracies come under the harshest attack. The Provincial Power corporation, for example, is shown to be heartless in its dealings with customers. Another public entity, Provincial Gaming, appears downright evil in its pursuit of gambling revenue and in its radical (read fascist) treatment of problem gamblers such as Stella. On the other hand, private corporations and conservative thinking in general escape direct criticism, unless it can be assumed that hardline conservative ideology itself is behind the survival-of-the-fittest ethos portrayed in the play.

Stella and Joe are shown to be the most victimized in this portrayal, though they in turn make victims of others. Stella, for instance, preys on accident victims, the inebriated, and anyone else on the street who is worse off than she is. She does it in order to survive but also to feed her vicious gambling addiction that years before caused her to lose custody of her son. She does, however, express remorse for her failures: “There’s no way I could ever make up for all the wrongs I’ve done in my life . . . All I ever wanted was to be with my boy again” (84). Stella reveals that she has a caring heart when she counsels Joe to keep taking his meds and to keep living straight: “You know you can’t be fighting people. And you can’t miss work . . . You need to keep your job, honey” (22). Despite Stella’s well-meant advice, Joe’s life spirals into violence and confusion after he throws away his meds. His fate will eventually be decided when he becomes delusional and confronts Janice with a knife, turning against the only person in the play who has a social conscience.

No one in the play comes out clean, even Janice, who compromises her good intentions by taking on multiple identities and deceiving others about her primary occupation as a government worker in the Welfare Division. She is a  “Provincial Encourager,” whose task is “to follow clients who are on welfare” and to help them “at every turn” (50). Her clandestine missions as a prostitute and filmmaker are questionable and sometimes farcical, and they take her to dangerous places where her innocence and goodwill are not enough. Her cause, however, is admirable, even if her methods are sometimes dubious.

She declares herself to be committed to exposing the daily injustices of her community. “I’m making a documentary that the whole world is going to see,” she says (88). She will be exposing the crimes committed by a government that sees itself as acting in the interests of the common good. Its representative in the play, the character of the Robe, reveals the fallacy of this thinking in his defence of government gambling operations: “It’s important to remember at times like these the good Provincial Gaming can do – millions of dollars, pumped right back in to the community” (89). The statement, in the context of the play, is essentially a lie used to mask the suffering and damage that gambling produces in the community. Individual lives are commonly ruined, and families can be affected adversely for generations, the play makes clear. Gambling addicts like Stella Dupree often turn to crime and when doing so create more victims and the potential for violence. Social service agencies arise in response to the need and so on.

North Main Gothic confronts the institutionalization of gambling in Manitoba and indicts the provincial government, and presumably its counterparts across the country, for being morally derelict in their responsibilities to citizens. Gray centres her story on a character, Trelkovsky, whose life has been devastated by the effects of gambling to the point where he is blind to the way that the pursuit of money at any cost has defined his life. We see a sliver of hope at the end when Trelkovsky breaks down emotionally, then reaches out to one of his loyal clerks, Lisa Pancharek, for support. The possibility of a meaningful relationship between the two and perhaps a new outlook on life for both is hinted at. The damage, however, may prove to be too great to overcome, and not just for the individuals directly affected. The play proposes that by valuing material gain and personal wealth above human decency and compassion for others, especially those in need, we have lost our way. The vision in North Main Gothic is bleak but ultimately brave in its dramatic examination of the darkness within. ♦