The Air is Elastic by Ella Zeltserman

The Air is Elastic by Ella Zeltserman 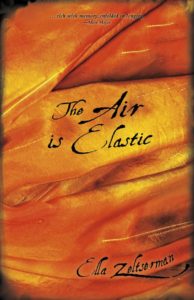 The Air is Elastic, Ella Zeltserman’s second poetry collection, is a yearning journey through time and space.

Perhaps her greatest accomplishment is her ability to vividly capture the essence of the collection’s many locales which include Cold War Soviet Russia (“march to the victory music, / or be killed” (111)); Spain in 1492, the year of the Jewish Expulsion (“shadows argue fine of Talmud. / Ghosts sing Flamenco” (99)), and the contemporary Canadian prairies: (“open sky / a disconsolate horizon / fields longer than my entire life” (58)). As she remembers and describes these vivid and varied settings, Zeltserman’s speaker grapples with her complex identity. As she wrestles with her own Soviet-ness, Jewish-ness, and Canadian-ness she also wrestles with some of poetry’s most persistent topics: cultural heritage, home, nostalgia, and self-concept.

This concern with identity is taxing for the speaker and provides the tension that fuels the collection. In “Night Vigil,” memories flood to her as she lies in bed, restless and unable to sleep: “I turn and turn / roast under the slow fire / of guilt, regret” (81). Impressively, Zeltserman repeatedly employs images that reflect the in-between nature of her identity. The colour grey, dusk and dawn (which she calls “the identical twins of time” (49) in one of the collection’s most precise metaphors), seasons, and substances undergoing state-change feature prominently. The loneliness and struggle of being in-between is beautifully rendered in “That Last Leaf” in which the last remaining leaf on a cherry tree “finally shows its anorexic ribs / to the barren sun” (42).

Zeltserman, a deeply sensual writer, attunes the reader to the way emotions, specifically longing, manifest themselves in the body. Whether she’s longing for home, for the past, for food and drink, or for sex, it’s always an intensely physical experience. Engaging with Zeltserman, I became aware of how the poems were affecting my body, especially her poems that centered on food and sex, which are notable for their urgency and energy. Compare this description of Turkish coffee:

and this description of a fig:

with this description of sex:

I dance,
shake half-naked breasts, faster, faster,
coming closer to you, closer, closer and
your hands, hot and large on my breasts,
embrace all of me and you bite. (34)

Zeltserman’s descriptions of eating and drinking read like descriptions of sex because, like sex, they are intensely physical and intimate acts. Like the beloved, the coffee and the fig are objects of deep desire, worthy of foreplay and pleasing to the senses.

There are moments where Zeltserman’s normally well-executed exuberance slips into hyperbole. For example, in “That One Small Step,” the speaker watches the moon landing for the first time forty years after the event and proclaims:

We were not a part of the whole
we were a different tribe
not earthlings. (96)

Coming at the end of a series of poems that beautifully evoke the specificity of her Soviet past, this ending, to me, felt like a forced summation of the divisions of the Cold War. It does not fully impact because it does not ring true. There are many parts of the world where the moon landing was not a major cultural event. There is no “whole”from which the Soviet Union alone was excluded. Normally her risks pay off, but occasionally, as in “That One Small Step,” they distract and pull the reader from the sense of immediacy she cultivates in the rest of the collection.

Ultimately, The Air is Elastic by Ella Zeltserman is the work of a brave poet who takes risks with language and subject. Her daring has allowed her to craft an affecting, physical collection that is fuelled by a deep sense of longing and the struggles of a liminal identity.