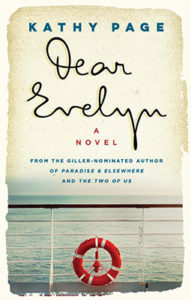 Marriage. We make jokes about it. We have names for it such as jumping the broom, vows, a socially recognized union, a sanctioned contract.  A match. But what does a marriage entail?

Celebration. Despair. Or more. Early in Kathy Page’s novel, Dear Evelyn, David Whitehorse, the schoolteacher, taught that, “Love was the only thing, in the end, that mattered.” (30) Perhaps he is right.

Page’s story begins with Harry Miles who is born between the wars to parents, Adeline and Albert. Later he wins a scholarship to an all boys’ school where he meets his teacher, David Whitehorse, who nurtures Harry’s love of poetry. As Harry says he “half hated and half loved words, held them in a kind of squeamish fascination because of their slipperiness, because they could take you anywhere at all…” (21) it is through studying and furthering his education that Harry enters another world, different from his father and older brother, George, who labour in a factory. “You’ll not get this chance again. Pay attention and speak up, but be polite,” his father advises on Harry’s first day of school.

Evelyn Hill whom Harry meets is different. Her father is an alcoholic, her mother, a hard-working charwoman, is almost self-effacing, as she tends to his needs. He is also tubercular and Evelyn is impatient with him, not because of his illness but because he refuses to help himself. Evelyn does not want the life her parents lead. She thinks life should be simple and direct, that there is a solution for any problem. Once when reading from the book Rebecca, she becomes impatient with the unnamed narrator and says at one point: “If ever she married into a country estate such as Manderley, her first move would be to send Mrs. Danvers packing…” (46)

These two very opposing people meet, fall in love and marry in the early days before the Second World War. Harry soon joins the infantry and ships out to North Africa while Evelyn and her new baby, Lily, go to live at a remote farm away from the bombing in London. The only bond holding them together is the love they know, their ensuing love letters and their hope – their daughter, Lily.

Page exquisitely conveys the couple’s need to know each other, to understand their loneliness through the letters they write to one another. This, the author tells us in her afterword, were taken from her fathers’ letters to her mother during the war. (307) But this is not the story of the author’s parents. It is a story of the relationship between Harry and Evelyn, of their marriage with its triumphs, its storms and blizzards.

After the war, Harry and Evelyn rejoin and set up housekeeping, Harry eventually building a house for the ever-growing family for Lily is joined by two sisters., Valerie and Louise. Evelyn struggles with the feelings for her father who often drunk, is now dying. He “became a living skeleton, still smoking, still drinking…Her father had been dying all his life.” (130)

As we continue to follow Harry and Evelyn’s journey into marriage, questions arise. What keeps the marriage together? What drives that same institution to frustration and disappointment? Evelyn in her efforts to make a perfect union, home and family, makes some drastic decisions. Harry on the other hand, seems compromising. He continues to read poetry and follow the poets. He makes notes but what happens to his dreams about poetry? Perhaps Evelyn is the poem he is writing.

Page skillfully gives us a vivid portrayal of the husband and wife that is mesmerizing. She writes with compassion, tenderness and a deep intelligence. She takes us deep into marriage that is both revealing and momentous and we are lifted to a place both surprising and satisfying.