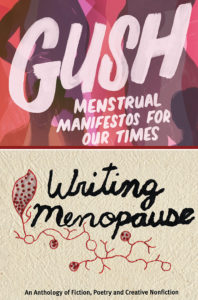 Here’s two reviews that really belong together. Read on!

“I’ll tell you frankly, it’s good to be a Crone, and to use my Crone-honed research abilities to investigate a menstrual myth or two.”

If ever a book flaunted its message, Deerchild’s, Gordon’s and MacDonald’s did, does, and will. Even the covers of Gush take on the hues and tones of the blots, blooms and clots featured within the collection of stories, poems, graphic art and creative non-fiction. Fortunately for readers who pursue the subject matter within the covers, menstruation-based writings turn out to be as absorbing as the feminine products examined comically or dramatically in these pages are not. Much hilarity may be found in the near-countless failures of such products to provide safe and comfortable sanitary aid—but that aspect of the monthly undertaking experienced by fertile women counts as just a small part of an eclectic whole. Difficult to put down most of the time (and occasionally difficult to pick up, after particularly graphic descriptions of uses for menstrual blood), the book takes every aspect of women’s monthlies as worthy of attention—and so defies the patriarchal enforcement of silence on the subject. Our liberalized cultural imperative of inclusion for the previously outcast or unmentionable means menstruation may be named as a fact of life for half the human race, in a way that does not demean those for whom it is inevitable. 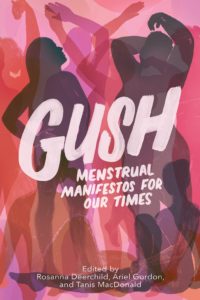 The word “squinchy,” used recently in Cawthorne and Morin’s introduction to Writing Menopause, deserves pride of position in any discussion of this work, however. There is plenty to make a reader squirm and flinch over it, here, yet powering through the uncomfortable pays off handsomely. Comic potential abounds: plays on words that relate to menstruation are impossible to resist, a fact to which Lorrie Nelson Glenn attests in “Ten Bloody Pieces of Advice”, a tour de force of unapologetic comments on “Membership in the Red Sisterhood” (91). The euphemisms for menstruation in Catherine Graham’s “It Begins When You’re Not Looking and Stops When You Are” can send a reader into paroxysms of laughter—following “The Red Baron” on her list with “experiencing technical difficulties” really drives the point home (128).  Even more remarkable is Susan Holbrook’s “Insert,” which substitutes the standard terms for tampon use with vaguely homophonic but semantically different terms:  “1. After washing your hams, take the produce out of the rapture” (205). Situational humour also generates laughs, since where a girl or woman finds herself when the leaks occur can be supremely compromising: there is “Horror on the Basketball Court”, involving the accidental drop of a hidden period pad where boys and men can see it. And then there is the poetic rendering in  Ali Barnett’s “Paid to Bleed”, of an arrangement that sees the speaker exchanging used tampons for money—with a yearning for the exchange when it stops (metaphorically connected to an accidental first insertion of tampon-with-applicator, differently uncomfortable).

The universality of the experience comes at the reader with stories from India and China, each revealing conventions that girls face as they become women. JoAnn Dionne’s non-fiction piece, “The Accident”, demonstrates the methodical approach taken by Chinese officials in acknowledging girls’ new concerns once they have reached menarche. Likewise, Revati Upadhya makes observations in “Red Alert” on the difficulty of access to proper hygiene for poorer women of India, emphasizing the society-generated despair that each woman feels when she is unable to get clean at her time of the month.  By contrast to a culture that shames women for their natural bodies, the stories from Indigenous cultures in North America detail the respectful treatment of women whose “moon time” (Deerchild) leads to respectful treatment by society: while separated from others, as Roxanne Shuttleworth shows us in“Life Givers”, menstruating women are able to concentrate on themselves and their own bodies, celebrating the force within them. And though not all customs are followed the same way from community to community, as Sadie Phoenix-Lavoie remarks in “Moon Teachings”, the attitudes held by First Nations societies are generally much more accepting and positive in regard to the fact of women’s monthly cycles. Having too much power within themselves as they bleed, women are sequestered so that they may explore their strengths, instead of treating these inner processes as weakness. The editors take care to include historical and contemporary attitudes in their collection, and the lasting effect on the reader is an impression of infinite possibilities in the actions and reactions women bring to their periods.

The wider community’s part in the picture (that is, where men figure in all this blood-talk) is not ignored, nor is it roundly criticized. Non-binary contributions to the anthology and appearances within stories and poems are few but significant, as transgender and sensitive souls, rather than knee-jerk reactors, have a chance to claim their positions in relation to the unfolding drama of the monthly shedding of the uterine lining. Especially moving are depictions of husbands suffering alongside wives as menstrual periods lead to pain or a sense of loss: in Nora Gould’s poem, “Some Nights He Breathed Up All the Air,” the inadequacy of Charl’s efforts to help mean that “[n]o matter how tender he is, and his touch is always gentle, even/ now I am a dark bruise” (190). What emerges is the variability of the experience, beyond its common ground.

As Tanis MacDonald’s introduction declares, the role of Crone, beyond a point where menstrual woes can afflict a woman directly, positions the writer at a distance from the vast fact of the monthly (if regular) or random, intermittent, thrice-yearly phenomenon. It does not remove empathy for women in the throes of bloody sloughing, however. As Erin Moure’s poem “Gorgeous” says, “Blood flow, gorging the ventricles, the chambers with their small colours,/ that colour, pain’s orange” (331) unites all of us who yielded to what could not be avoided.

Carolyn Creed received her PhD. in English Literature from University of Manitoba in 1998, after having taught post-secondary English full-time since 1980. Dr. Creed is Associate Professor of English at University College of the North. Her poetry has recently appeared in sub-Terrain, The Windsor Review, and the Global Poetry Anthology (Vehicule Press); both poetry and prose are featured in Poet to Poet (Guernica Editions), released in November, 2012. Her review of Rose’s poetry collection Marry and Burn appears in the Fall 2016 issue of The Goose (York U). The montrealpoetryprize.com website carries an MP3 of the author reading “Morel-Floored Forest.”

This entry was posted in Book Reviews, Essays, Non-Fiction. Bookmark the permalink. Both comments and trackbacks are currently closed.