In Search of New Babylon by Dominique Scali, translated by W. Donald Wilson

In Search of New Babylon by Dominique Scali, translated by W. Donald Wilson 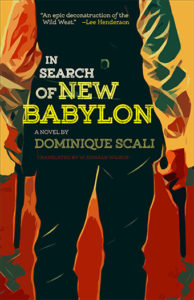 In Search of New Babylon marks Dominique Scali’s first novel, and one of W. Donald Wilson’s several translations. Like Guy Vanderhaeghe’s The Englishman’s Boy, Patrick DeWitt’s The Sisters Brothers, or Sean Johnston’s Listen All You Bullets, Scali continues the trend of contemporary Canadian Westerns with her own foray into the Wild West of the American frontier after the Civil War.

The novel opens with Reverend Aaron found unconscious and face down in the dirt of Paria with both his hands amputated. The narrator remarks that though many may read the book for the other characters, the book is dedicated to the people of Paria, “for only they will turn the pages to know more about the Reverend Aaron,” who leaves the town almost as mysteriously as he arrives (14). Scali organizes these character’s stories into a series of catalogic notebooks, from “The Ten Hangings of Charles Teasdale” to “The Reverend Aaron’s Four Notebooks”, which mimic her rhythmic, list-like descriptions. For example, when describing Pearl Guthrie, Scali writes:

“She would like to have heard about towns that didn’t yet exist, deserts where no one had yet set foot, terrains swarming with a life at war with itself, fought over by serpents, scorpions, carnivorous plants, freezing nights, and sandstorms, about towns whose names no one could pronounce” (141).

These descriptions are accompanied by sparse, wry dialogue and jumps in time that slowly reveal the ultimate fates of the characters, and how Reverend Aaron came to be handless and collapsed in Paria.

While the narratives of the male characters dominate the first chapters, a refreshing change arrives in Notebook II when we are introduced to Pearl Guthrie. While all the characters’ narrative threads are absorbing and weave themselves around each other, it is Pearl Guthrie who ultimately leads to the telling of the story, and Pearl Guthrie who ties everyone’s stories together. Though Scali still relies, quite problematically, on the tired Western trope of the “native savage”—describing, particularly, the Apache as deceitful drunks (90-91)—she does an excellent job of avoiding the domestic, pioneer women trope with Pearl Guthrie, even if her main goal in life is to find a husband. Pearl is a deeply unsettled character, looking, typically, for something missing in her life, but Scali writes her search in a new way. She leaves home for the West, where “real men” live, but is constantly disappointed by everyone who surrounds her. The story recalls a memory when Pearl, in her youth, attends a mass hypnosis session, where the hypnotist lines everyone up and waves his hand and everyone collapses to their knees, except for Pearl, “who would be troubled by the experience forever after,” because “when everyone around you collapses, men included, and you are the only one left standing, you must have missed something” (111). Pearl never quite fits in, and it is her relationships with all the other main characters, who also don’t quite fit the mould, which ultimately brings the story together.

Scali has written a new type of Western that, although doesn’t end in gun smoke and glory, still has all the basics covered, like outlaws, cowboys, marshals, and prospectors, and keeps you enthralled with characters whose true selves always seem just out of reach to the reader. In Search of New Babylon is an entertaining and well-crafted read for Western and CanLit fans alike.

Caitlin Voth is an MA student in English at UBC’s Okanagan campus where she is studying the Canadian private press. She has worked in the Humanities Data Lab at UBC, and is intrigued by how traditional books and technology come together in the Digital Humanities. In her spare time, she is learning the intricate craft of letterpress printing.