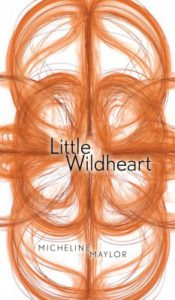 The Vagaries of Love, its Loss and Renewals, Replenishment of the Self

In Little Wildheart, Micheline Maylor writes poems that chart the vagaries of love, its cycles of loss and renewal, followed by a realization about the joy and freedom in reinhabiting the self without outside commitment. From the introductory poem with its MacEwenesque “We are entirely flammable” to one of the later poems, “Free,” Maylor draws images from an elementary and animal world to reflect the psyche and its spiritual progress. Allusive and elusive, educated and down-to-earth, witty and conversational, these oftentimes rollicking poems are fine-tuned with technical skill and strict formalist measures. Appropriately, the motif of “little wildheart” (used for the title of the collection) reappears in related contexts throughout the poems, its iconic discovery and recognition like finding a sudden egg in a bird’s nest.

Whereas in the poem “We are entirely flammable,” the experience of joy in the physical self is apparent in the lines “Feel/fire in your thighs, your thighs and lungs, as you run,” that elation is undercut by the substitution of “cremation” for the expected “creation” in the verse that follows: “daily towards your own cremation (1).” From the self which is presented in terms of the predatory, the poem again turns on expectations built up in the reader, and “Death” becomes the hunter (1).

A more vulnerable self is portrayed in the pantoum, “Rewind,” which dramatises a young girl’s experience of rape. Rather than feeling sorry for herself, the young speaker registers a stoicism and getting on with life that is convincing in both its youth and wisdom:

Nobody came
and what would they do anyway, that hasn’t been done?
No, I don’t want to call the police. It’s too late.
I’m so tired, mum. (10)

As the lines turn obsessively on themselves in the manner of the pantoum, the repeated-with- variation line “and what would they do that hasn’t already been done?” becomes ironic. With her skirt in the garbage, she is now “safe, tucked in her bed (10).”

From such a poem about rape, we move into an expertly-turned glosa, “For there are mysteries, and such advice,” which is written around a Layton stanza. On the one hand, that desire is irrefutably sexual (“the rabbits in my blood have turned to circus freaks/ roaming my veins looking for a place to breed”) and, on the other hand, this yearning seems to be associated with a more general malaise or angst (“My mother offers gardening, birdwatching,/ and love thy neighbour though one has thrown an axe/into her fence”) ( 29). Accordingly, the speaker with expert tonal modulation, shifts into the darkly comic. This undefined longing for the unsubstantiated, moreover, takes on a more dissonant aspect in the final stanza that alternates between the conversational, the humorous and something more iconic:

Then I recall the time I kayaked for hours, till I had gone
to lake-end and made fire: one wrapt flame at noontime fogs

perceptions. When I meet a tree, tall and dark and thin, I’m already
sizing up sculptural form, what to set free. (30)

“It is a full-time occupation” the speaker quips, “this sorting things out” and, more humorously, she adds,“My fortune cookie friend says, make friends/ with a man with a horse.” Here, again, suggestion of the droll in the chicanery of a fortune telling friend offsets a more serious intent.

In another glosa (a form favoured by Maylor) built around a stanza from Anne Michaels, “How to be in a Garden,” Maylor’s speaker finds herself reacknowledging the signs of attraction in herself while implementing a winter metaphor: “How many secrets/ can I keep from my own arteries under my hunched shoulders?” (38) Hard not to notice “the one covered lady on the beach in noon-day heat” when in spring there is so much that “pushes up”:

I need a knife to cut through all this bullshit.
You are in your kitchen doing taxes, making potatoes
for dinner tonight. And we have sent 89 texts today
professing our love. (38)

Maylor offsets romantic imagery drawn from nature with the mundane and practical to create a totally individual tableau of the domestic scene where her lover texts her. In the closing stanza, the iconic wildheart image reappears as an implicit bird nest: “Little wildheart, hollow out as a body-shaped nest” and “I wear a blue ring to mimic the sky in my veins (39). Here is a poem in which romantic love is tailored to fit a more complicated modern context and, accordingly, the natural world competes with kitchens and taxes and texts.

Another formally structured but more elliptical (and slightly cryptic), poem appears in “I have forgotten more than I knew” (65). Here Maylor writes in elegant couplets with something of the gnomic quality of the Persian ghazal (though the lines are not rhymed or end-stopped as in the strictest ghazal format). Not only is the poem about love and that potential life-affirming instinct, but also about memory and the nature of the human psyche with its intrinsically altruistic core:

There’s a secret inside me that I never knew but will tell you
in firelight with enough pinot gris.

Memory is not a recording device.
The core of me is kind. (65)

Here the speaker acknowledges a personal shortfall in her own failure to love, which is seen in terms of a “bewildered” unwillingness to try (65).

In Little Wildheart, Maylor writes a well-integrated collection of poems that progresses through self-sufficiency, love’s loss and its sudden irresistible reappearance even as the seasons change so completely and suddenly albeit predictably. While Maylor writes in traditional verse forms, her subject matter is more complex and modern and unwieldy: her allusions and images range from those about the animal world and nature to literary ones that impel her to construct her own stanzas on the metaphoric shoulders of previous poets.

gillian harding-russell is a freelance writer and poet. She has written three books of poetry and five chapbooks. In 2016, her sequence of poems Making Sense won first place in Exile’s Gwendolyn MacEwen competition. Her writing has come out most recently in Arc, The Goose, Grain and will be coming out in The Windsor Review.