Every Night of Our Lives by Rocco de Giacomo

Every Night of Our Lives by Rocco de Giacomo 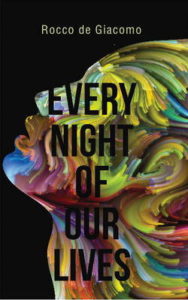 Rocco de Giacomo is the author of several books of poetry. Over the years his works have appeared in literary journals such as Vallum, The Antigonish Review and Tower Poetry. With his new book Every Night of Our Lives the poet explores the themes of fatherhood and middle age; he also considers the anxiety of living in an age of uncertainty.

He writes several poems to his daughter, Ava, called “Notes to My Daughter”. In them he marvels at this new life, the presence of his newborn, and reveals how precious each moment is, and how we should approach these moments almost with a sense of holiness. He paints vivid pictures of Ava’s presence in the womb, in an incubator, and her struggle for survival; ‘You are so still, a bloodstone on white. But the parents continue to assist her, to have faith in her; “begging, pleading you out of the undertow/with thimbles of milk.” In a later poem he writes of holding her up to a window but she does not see to the outside. Instead she observes the man and the other child reflected; ‘The other room: another planet.’ She shows her father there are other places other than the physical ones we see every day. The poet realizes the magic of a child’s imagination, the purity of her thinking, something he can accept with peace. (33)

“Every Night of Our Lives”, the signature poem of Rocco de Giacomo’s collection, has the poet wander through a dream where he journeys into a land with a feeble light, ‘a lantern’s glint’. He sees only ‘A parched land’. When he comes upon a ‘dream window’, he discovers no revelation. By the last stanza he arrives ‘frightened and trembling, a fierce unfolding’ Though the poet burns with intensity he is still at the beginning of discovery like a butterfly emerging from a chrysalis, new; he is fearful of what lies ahead. The portrayal is an indication of the crossroads he is at. (43)

In “Homes to Purchase on Earth” the poet responds to Al Purdy’s poem, ‘Married Man’s Song’ in which a middle-aged man meets with a girl in a motel room. De Giacomo’s persona finds himself in a similar situation. His poem depicts a poet escaping from a party, who finds himself ‘alone later on the streets of Brandon/with shoes untied’. We are left wondering that by doing so if he may have missed an experience, If ‘to ask/who’s to say whether such a particular trespass equates/to living an enchanted life?’ This is the middle-aged man searching for reprieve, for some solution to his life. (73)

Another poem in which de Giacomo considers mortality is “Louis Riel’. The poet draws on direction to convey his setting of Winnipeg, Manitoba: ‘Head east on Broadway/Make a right at the Safeway’ It is this easy manner of speaking, the names of things familiar that draws the reader into the poem. When he does survey the room he sees the ordinary, the ‘enormous kitchen stove,’ ‘the wooden cradle’. He discovers that great humans die just as we die—we all pass away and only things remain of what we once were—that we are ‘endearing ourselves/to our own vanishing.’(37)

In the wonderful poem, ‘The Blank Page’ the poet depicts a picture of what it is to write. He compares the writing of the blank page to a boat he can sail away on ‘easy with promise’ with the hope he can write the poem. He later realizes how complicated it is to write the actual piece; it’s like driving through a storm. The imagery is stark yet vivid; ‘The blank page/remains a windshield in a blizzard’ and ‘It is/the snow-blind drive to work/and the shadow of something ahead.’ It is a poignant rendering of the poet’s struggle to find the heart of a poem. (75)

These are but a few samplings of de Giacomo’s poetry but each time they are read the poems bring new meaning and new appreciation. Al Purdy once wrote that poetry “…is the voice of reason, the voice of humanity, the voice that says ‘I am me’. I think that is what de Giacomo is emphasizing with his ruminations in the life of a middle-aged man. It is a book worth reading. (143, rooms for rent in the outer planets, Harbour Publishing)