Running on Fumes by Christian Guay-Poliquin 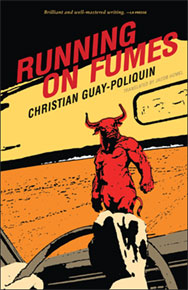 A doctoral student named Christian Guay-Poliquin is now emerging. In 2013, his first novel, Le fil des kilométres, impressed Quebec publishers Le devoir and La presse who then boosted the author with blurb-friendly praise. Le fil des kilometers was then translated to English by Jacob Homel and re-titled Running on Fumes.

The publisher bills this book as “…a reimagining of the myth of Theseus and the Minotaur….” (back cover) but this novel is not a repetitive con job. True, the ancient legend is retold in the six introductory vignettes, but mythology is a tool used to fashion an original story that incorporates contemporary concerns.

It is easier to steep a story in timeless themes when characters and places are unnamed. The reader can only assume that the protagonist’s dying hometown, “A depopulated place, where house after house was clothed in plywood windows” (37) is in Quebec. After his mother is killed in a car serviced by his auto mechanic father, recrimination leads to mutual estrangement. The mine’s closure eliminates the possibility of a future in his hometown.

When the protagonist finds a job in a western refinery’s garage, most people will assume that it is located in Fort McMurray, Alberta. The book is unexpectedly topical as it was originally published before the Canadian oil industry’s collapse and the catastrophic wildfires that devastated Fort McMurray.

The anonymous protagonist is mastered by disaster and defined by loss. Even a bout of good fortune leads to further pain.

He travels west, where he meets a woman who owns a cat. They find employment “She…in some bar, and me at the refinery” (23). His partner takes off, leaving her “animal companion” behind. A power outage closes the refinery. The pet runs away during the protagonist’s journey. Its fate adds a darkly comic edge to the plot, but the narrator and his readers may be too distracted by the dawning of a dangerous dystopia.

Perhaps Guay-Poliquin’s vagueness shifts focus to the main character, his mission and the catastrophe that complicates it. The mechanic decides to head back east when his estranged father falls ill from what is colourfully termed “…cancer of the memory” (26) just as an extended regional blackout is creating social chaos.

One might compare this society to a labyrinth, but not the Cretan challenge. Theseus kills the Minotaur to save his peers; the protagonist travels to save his aging father from dying alone. The northern forest is labyrinthine, but the journey is one way only.

Guay-Poliquin is a clever student who may have outsmarted himself. Since its original title is Le fil des kilométres, distance markers are substituted for chapter titles. For example, Chapter 10 is “Kilometer 85” (32), drawing readers into the protagonist’s prodigal odyssey.

Running on Fumes is a Canadian legend processed as Canadian mythology.

To purchase Running on Fumes by Christian Guay-Poliquin, click here.

Ronald Charles Epstein has visited Alberta, northern Ontario and Quebec, but not on the same journey.