Hot Town and other stories by Janet Trull

Hot Town and other stories by Janet Trull 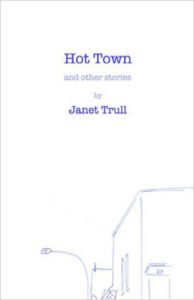 Janet Trull, a columnist for the Haliburton County Echo, is also the winner of the 2013 Canada Writes Challenge. Her debut book, Hot Town and other stories, is a collection of 18 narratives; the tales are about ordinary people who are trying to make their lives as big as they can in the space of a small community. Trull’s stories are poignant, concise and contain an essence that is reminiscent of an Alice Munro telling. Each one is well-written, vividly portrayed and shine like a flash of colour in a dark forest.

“Hot Town”, the story which opens the book begins with the sentence, “Summer moves through town like a river of slug, heavy and inevitable” (1). Anything can happen the author implies and if you stand in the way, be prepared for the consequences. Jenny awakes to discover Warren is no longer in the house. In another part of town, Will, a plain clothesman, enters a crime scene. Melanie Lawson kneels on the lawn with blood on her hands, Officer Ellis standing nearby. Melanie’s children are at day camp unaware of the tragedy that has taken place. Reg Lumax, another police officer, enters the day camp where Jenny works to pick up the Lawson children. Like the dragon fly caught in the spider’s web in the story, the characters are caught up in situations as hot as the town’s stifling heat. What’s to be done?

“Embracing Decay” is the story of Andrea whose son, Ryan is in hospital dying of cancer. Ryan also has a gift. He can identify any plant and seed from the forest and asks his mother to bring something from there for him to name. Andrea believes her penchant for cleaning is destroying her son, “…she was a clean freak when he was little, exposing him to all kinds of toxic chemicals,” (33) and it is this belief that sends her into a downward spiral of depression. She meets Cole, out on parole, who becomes involved in an accident that lands him in the hospital. It is here Andrea learns Cole’s story. How these two unlikely characters interact further is part of Trull’s magic in storytelling. She weaves that magic to a satisfying degree that has us concluding that maybe decay isn’t so bad after all.

In a somewhat humorous piece, “The Happy Prince” introduces us to Jamie and his grandmother, Ruth, who lives in a house that “tilts towards the gravel road…lonely and spare” (39). Jamie has plans to travel to California but he decides to help his grandmother by doing repairs in and around his grandmother’s property. In the days and month that follow, she tells him about Oscar Wilde and the story of the Happy Prince. A delight, this story affirms that fairy tales can happen.

“Hope is a waking dream”, John McKay tells the children in the story, “Polio Camp” (79). The young narrator informs us of his mother’s despair at the loss of a husband in the war and her inability to cope with everyday living. Now, the threat polio has her imagining all sorts of disaster. But John McKay, the supposed town drunk with a Doctorate in Philosophy, takes the troubled family on a journey where they discover the woods and what it contains; they learn about the First World War and its wastefulness. Gradually, under his guidance, the children and mother learn to reshape their lives.

Trull’s stories speak of tragedy and injustices; they stir the heart. They are sharp, funny, and illuminating. They run from the macabre of “The Chip Truck” to the gentleness of the human nature in “Spoonbills.” Her debut book is well worth the read and I for one, look forward to future writings from this author.