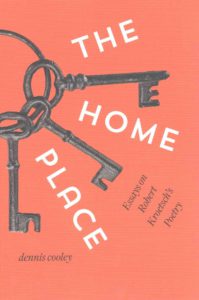 Dennis Cooley has written a remarkable monograph on Robert Kroetsch that focuses primarily on a handful of his books of long poems.Cooley weaves an astute criticism of Kroetsch’s writing with details of Kroetsch’s private life, with an enquiry into being a writer, and with covering (and responding to) a great deal of previous Kroetsch scholarship. The book consists of six chapters, two of which are on Seed Catalogue, one on The Ledger, and one on The Sad Phoenician. Each chapter focusses on one book, but brings into play the entire Kroetsch oeuvre, making for an acute study that covers an enormous critical range.

In the last chapter, Cooley scrutinizes some Kroetsch interviews, essays, talks, and other anomalous pieces (such as sections covering the book-length interview/conversation, Labyrinths of Voice and various pieces from A Likely Story). This chapter notes how much Kroetsch criticism has been informed by a plethora of interviews, conducted mainly in the late 1970s and throughout the 1980s. “There he was in all those intoxicating talks,” writes Cooley, “charged, adamant, allowing, wondering, charming, agitated, articulate, considerate, amused,” as well as “bashful, flamboyant, affable, brilliant.” And welcoming, comical, rejoicing (264). In this last chapter of his book, Cooley captures the personality of the writer, and how engaged he was with his words, with his knowledge, with his audience.

One of the remarkable aspects of The Home Place is how successfully Cooley brings in biographical information, without the book shifting into the field of biography. In speaking of the lines in Seed Catalogue, where the persona’s father warns that “the next time you want to / write a poem / we’ll start the haying,” Cooley adds this note: “The disapproving and disallowing man bears little resemblance to Kroetsch’s own father, who by all odds was an accommodating man,” often spoiling his kids, and extremely forgiving of their shenanigans (315), including his son wanting to be a writer, instead of a farmer. Biographical information includes Cooley’s own memories of Kroetsch: “He listened as no one listened to the woes and wishes of others” (265). That Cooley knew Kroetsch personally is an asset; it brings even greater depth to this book. For example, he offers insightful humour such as his comment on the office that Kroetsch occupies when he first moves to Manitoba in 1976: “bare, even barren, every paper clip in place, both of them…” (20). Cooley’s reading of the interviews in particular is further informed by his knowledge of the author. On page 262, Cooley lists the many instances of Kroetsch as a speaker who is “perfectly amenable to what others say, or might say.”

So much more than a celebration of the anecdotal, The Home Place, like Kroetsch’s poetry itself, celebrates the “provocations, openings, incitements—what is vital at the heart of language” (301). About the formal structure of Seed Catalogue, and clothed as a question, Cooley works up the most comprehensive enumeration of Seed Catalogue that I’ve read to date:

Subsections in one of the Seed Catalogue chapters include titles such as “Chants,” “The Invocation,” “Metrics,” and “Anecdotes / Dirty Words,” to name a few. Despite Seed Catalogue being so widely analyzed, Cooley has strikingly new and intriguing thoughts to offer, as evidenced in the “outright pleasure” (as Cooley says about reading Kroetsch’s essays) that readers will get from perusing Cooley’s lively, critical analysis:

Not bad. Not bad for starters. There among the catalogues and kings, the squash and the cabbage, the horses and the bullshitters. Around talk of Pete Knight, of family and friends, poets and pretenders. The gardens and the pubs. All that. (150)

In speaking of The Sad Phoenician, Cooley writes that Kroetsch “clearly aims for a new entry in the long tradition of the love poem” (210). Cooley understands that Kroetsch felt “uneasy about the status of the love poem” (205), and that he was driven by ideas that conjoin love, idiom, slang and even what some might consider dead clichés: “Now, in flamboyant acts of necromancy, he brings back the dead” (202). Cooley here reaches from The Sad Phoenician to The Hornbooks of Rita K, quoting a Raymond passage, “We write as a way of inviting love,” as a way to show Kroetsch’s breadth but also to demonstrate the alignment that one book may have with another, the impact and influence that the “love poem” still has on contemporary writing. At the same time, says Cooley, the fact of the title, The Sad Phoenician, configures and frames this book: “Oral syntax and rhymes and reversals and clichés and puns and conceits spin dizzyingly through the lines” (212-213). The title’s gesture toward the alphabet (the book is divided into 26 sections), Cooley deftly ties to Liebhaber, a character in Kroetsch’s novel, What the Crow Said, who is profoundly “obsessed” and “unnerved” by the alphabet (331, note 10). The extensive research in this book astounds, as Cooley loops back to an analysis of the poem’s structure, noting: “Kroetsch’s poem is deviant” (213), the “and / but” pattern “advancing and impeding, proposing and countering” (220).

The amount of time Cooley spent in the Archives and Special Collections at the University of Calgary is clearly apparent from the numerous versions of poems he cites, from the details about dates and current events he references, and from his discerning ear and eye. Let me say that this book undertakes to examine an enormous range of poetics (from Aristotle to Charles Olson to Eli Mandel), of books (by Kroetsch and by others), of critics (ranging from Samuel Beckett to Roy Miki to Northrop Frey), of literary tropes, and of the power of language. “Not bad. Not bad for starters…”

Nicole Markotić is a poet, fiction writer, and critic who teaches Contemporary Literature, Creative Writing, Disability Studies, and Children’s Literature at the University of Windsor. She is author of four poetry books (including Bent at the Spine), two novels for adults (including Yellow Pages), and one YA novel, Rough Patch (forthcoming in March 2017 with Arsenal Press). She has edited numerous books and essays collections, and has written a critical book on representations of disability, Disability in Film and Literature (McFarland & Co). Her interests include theorizing what she terms the “problem body,” Canadian poetry and fiction, and children’s literature. She has recently published a poetry book with Coach House Press, Whelmed (2016), and has edited a collection of essays on Robert Kroetsch with Guernica Editions (forthcoming in spring 2017).