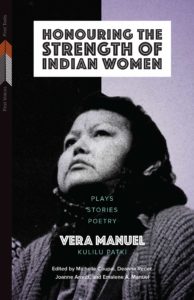 In her introduction to Vera Manuel’s collection Honouring the Strength of Indian Women: Plays, Stories, Plays, Emalene A. Manuel remembers

the discussions she had with her sister Vera about the kind of storytelling they were creatingand developing with their theatre work in the late 1980s. They had begun what she calls the process of “decolonizing [their] thinking about storytelling” (3-4). She says, “[W]e wanted to decolonize our Western minds to imagine what and how our ancestors did story and how we could draw from that for dealing with life today” (4). Their process came to involve the integral use of Indigenous knowledge in the storytelling as a way to address the oppression that Indigenous people had experienced historically to the present day under colonialism. According to Michelle Coupal, in her essay in the anthology’s “Afterwords,” Vera Manuel’s plays, in particular, “offer up a course of healing through the telling of difficult personal shared histories, through the acting out of the healing process, and, importantly, through the reclamation of traditional Indigenous cultural practices” (326). All the work in the collection ultimately engages this process of truth-telling and healing, and enacts it in the context of Indigenous knowledge.

This critical edition, collaboratively edited by the Indigenous writers and scholars Michelle Coupal, Deanna Reder, Joanne Arnott, and Emalene A. Manuel, brings together both the published and unpublished work that Ktunaxa-Secwepemc writer and educator Vera Manuel produced from the 1980s on until her death in 2010. Manuel’s work collected here includes five plays, four short stories, 33 poems, and an essay on residential schools that she wrote for a post-secondary history course in 1987. In addition to Manuel’s writings, the editors have included an introduction (as noted above) by Emalene A. Manuel and three essays by the editors. In their essays as part of the Afterwords, Coupal, Reder, and Arnott focus on Manuel’s work by genre, with each editor discussing a different genre. The Afterwords section opens with a poignant selection of 13 photographs featuring Manuel and members of her family. Two of the pictures show Manuel’s mother, Marceline Paul Manuel, when she was a girl at residential school. A brief, but helpful, bibliography is also included. The book is published as part of the University of Manitoba Press’ First Voices, First Texts series, which is devoted to the publication of Indigenous literature of the past. The series editor is Warren Cariou.

Manuel’s playwriting emerges from the multi-faceted therapy and healing work that she conducted within the Indigenous community. Emalene outlines the extent of that work:

[It] included training, facilitating healing groups, research writing, curriculum development, cross-cultural awareness training throughout Canada and the United States. She worked mainly with intergenerational trauma and unresolved grief related to the residential school. Additionally she facilitated healing workshops for youth using drama, mask making and other creative processes to explore the impacts of shame as it relates to sexual abuse trauma. (4)

This work cannot be seen as isolated or separate from her writing. Her first play, Song of the Circle (1989), came about, in fact, after she had been contracted to write a play about family violence for a youth conference (3). The play presents the story of a young Indigenous couple whose lives together are being torn apart by abuse and trauma that have their source in the loss of their culture. Mary and James live in a “small rundown shack” on the edge of town with their baby and James’s grandmother, Anmah. Their crisis comes when James physically assaults Mary and flees into the nearby woods where he collapses, sick with shame and despair. “What’s the use of living?” he cries out. “I don’t wanna live anymore” (82). But this act of violence against the woman he professes to love forces him to finally confront the darkness he feels within. In this confrontation with the truth, he is aided by his grandmother whose own heartbreaking stories from the past help him to understand why he has become the person he is. She helps him to seek the guidance of their ancestors as he realizes the need to change his path. Mary comes to a new realization, as well, with the grandmother’s intervention, and decides to take their baby and leave James, though their story concludes with hope and the suggestion that healing may yet occur.

Song of the Circle introduces many of the subjects and themes that run through Manuel’s other four plays. With each one, the characters are seen initially to be caught within a matrix of forces from the past that keeps them in a debilitating state of grief and suffering, unable to find a way out. The characters, from one generation to the next, all arrive at this same place, despite having taken different paths in life. Manuel’s Strength of Indian Women, for example, which premiered in 1992 at the Women in View Festival in Vancouver, places the subject of inter-generational trauma at the centre of the story. It focusses on the lives of four female Elders, all survivors of the residential school system, who have been brought together on the occasion of a 13-year-old girl’s coming-of-age ceremony and celebration feast. Suzie, the grand-daughter of the play’s main character, Sousette, is getting ready for a two-day fast as the play opens. Her mom Eva is preparing her daughter’s bundle of medicine, smudge, and water, while Sousette is bringing out old photographs of the four women when they were young girls. Suzie’s coming-of-age will become the catalyst for the women to reflect on their own childhoods and the troubled years that followed. The photos become instrumental in taking them back, but it is ultimately the telling of their individual stories to each other that enables each character to find release from the bonds of their grief. The stories open up the possibility of healing. This promise may be realized in the lives of the women themselves but also in the generations of girls and women, such as Suzie and her mom Eva, who follow them. In speaking about the way that Strength of Indian Women was used in their therapy work, Manuel’s sister Emalene says: “The process was one of using story to find meaning for our internal pain in order to create truth in the world and also to create space for articulating that truth” (6).

At about the same time in the late 1980s that Manuel was beginning to write plays, she was making an impressive foray into the world of fiction writing. The editors have compiled four short stories of Manuel’s that Deanna Reder says were written in 1987. Three of the stories had been unpublished and previously unknown, while the fourth story, “The Abyss,” was published in 1993 by a University of Saskatchewan press in the collection Residential Schools: The Stolen Years. All four deal with Indigenous peoples’ loss of culture and identity brought on primarily by the residential school system. But the stories also deal with the characters’ resistance to those forces of oppression and with strategies of survival within the institution and larger society itself.

The four stories are roughly chronological, beginning with a First Nation community’s first traumatic exposure to residential school (“That Grey Building”) and ending with a mother’s revelation to her adult daughter of the sexual abuse the mother experienced as a girl at residential school (“The Abyss”). It’s possible to see in these four stories the suggestion of a full volume of stories comprising a short story sequence, perhaps, if Manuel had continued to add to the four she had written. As such, the stories she did complete provide valuable perspectives on the educational experience that Indigenous children and communities had forced upon them. In “Theresa,” for example, the young female protagonist has to come to terms with her best friend’s death at the hands of a nun who supervises them at residential school. In “The Letter,” the narrator recalls her years at a town school when she becomes a target of racism for having befriended a popular girl from the white community. As in Manuel’s drama, says Reder, Manuel’s stories reveal pathways to healing (344). In this respect her fiction “[proposes] a method that relies on intergenerational respect, on a clear-eyed assessment of the damaged familial and cultural ties, on the importance of telling one’s story, and on the appreciation of the body in remembering” (344-345).

Manuel’s poetry reveals a strong storytelling impulse, as well. According to Arnott in her essay in the Afterwords, Manuel had been writing poetry from an early age, though its publication “came much later than her playwriting” (362). This is not to say, however, that her poetry was not being heard. Manuel records the following in an artist statement included in the anthology Rocksalt: An Anthology of Contemporary BC Poetry (2008):

publish it or to use it for any other purpose. As long as the words that came to me could help to open doors for others to get at their feelings and their own words that is all I cared about. (362)

In using her poetry to speak about difficult and painful subjects, Manuel was giving permission to others to do the same. Her poetry strives to make a personal and emotional connection with its readers through narrative. Stories figure prominently in the 70 pages of her poetry found here. Most of the stories seem to have an autobiographical basis such as those in the poems about love (“LA Obsession Song,” “Addictions,” and “Lies”) and in the many poems about childhood and parents (“Abused Mothers, Wounded Fathers,” “Hunger,” or “The Catholic Church,” for example). But there are other poems where she adopts the voices of others, such as the Latino mother in “La Guerra” or the brothers separated at a young age and fostered out in “Two Brothers.”

Throughout all the poetry we can hear the call to liberation or freedom, a resistance to the states of oppression that the speakers find themselves caught within. In “The Truth About Colonization,” the resistance is heard as overtly political. While in “When My Sister & I Dance,” it is heard in the gentle voice of a young girl as she describes the way that their dancing takes the sisters into a sacred space:

With this edition, the editors of Honouring the Strength of Indian Women are ensuring that Vera Manuel’s voice will be heard in all its fullness, range, and power for generations to come and beyond. It’s evident that Vera Manuel was ahead of her time in reckoning with the history of injustice that Indigenous people have faced in this land since the arrival of the Europeans. She confronts this history fearlessly but with such compassion and wisdom arising from the richness of Indigenous knowledge and ways that we can find within her vision our own individual duty and responsibility to the past.

Dale Lakevold is a playwright from Minnedosa, Manitoba. He teaches English and creative writing at Brandon University.

This entry was posted in All Reviews, Book Reviews, Theatre. Bookmark the permalink. Both comments and trackbacks are currently closed.