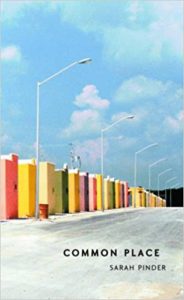 Common Place, Sarah Pinder’s second book of poetry, is a challenging read. This is partially due to the subject matter at hand—Common Place is concerned with structures and discourses of power at a human level, and necessarily presents the violence inherent in these structures—but is also a product of form and style. Long poems, especially ones driven more by thematic unity than narrative, are seldom easy reads. Common Place is in many ways the very definition of what Charles Bernstein calls “the difficult poem.” It is challenging, affecting, occasionally unpleasant, and provocative. Bernstein writes that “[d]ifficult poems are hard to read… [they] will provoke you, but this may just be its way of getting your attention.” Common Place is this kind of poem: it provokes the reader out of a place of comfort and passivity, and when it has the reader’s attention rewards them with a critique of gender, class and capitalist economies as systems of power marked by literal and metaphoric violence conveyed through a series of stunningly evocative images.

The advantage that poetry has over other forms of protest literature or critique is that the well-crafted image carries with it an immediacy. Consider these two lines in the context of the national conversation on Reconciliation: “We position ourselves as guests/ when it suits us” (15). Territorial acknowledgments and other rituals of reconciliation performed by the Settler nation in Canada are often explicitly about positioning the speaker or institution as a guest. This has the symbolic function of destabilizing the claims to ownership and dominance that settler institutions rely on to justify their authority. In these lines Pinder is able to reveal the power imbalance in the relationship between the guest and the host. The collective we only “position” themselves as guests—and, it should be noticed that positioning is discursively different than acknowledging—when it suits their needs. The settler nation only acknowledges itself as a guest on indigenous lands when it is morally or politically useful to do so. It also carries with it, by virtue of power, the ability to refuse to claim that position. These lines depict power as the ability to choose, to exercise agency. This concept is central to the book and Pinder is able to communicate it in a single, beautifully crafted couplet. In these moments of revelation and recognition, whether through the kicker of “when it suits us” or through the similarly powerful image of swimming pool as symbol of privilege, “Drought summer,/ we hoard our water,/ keep it/ tiled blue” (35), the work of reading the book is rewarded. The subjects being depicted may be challenging and the text asks the reader to position themselves in relation to power and privilege in ways that may reveal things that they do not want to admit, however, the text never becomes mere polemic. Common Place is always poetic in its use of language which renders even the recognition of one’s own complicity in the violences being depicted epiphanic rather than incriminating.

Part of what softens the blow of revelation is that by shifting perspectives, bodies, subjectivities, Common Place never allows the reader to be only the oppressor or only the victim. Everyone is subject to violence of the systems of power Pinder explores, and everyone is complicit in their maintenance. This is the commonality of Common Place, and this commonality is the system which organizes the book. Individual fragments or poems lack titles, and there are next to no proper nouns save for a few scattered place names. This works to emphasize the commonality of the experiences as they are not bound to fixed subjects that serve to limit the reader’s potential engagement with the text. However, this can have the effect of rendering some moments in the text oblique because without some context—and this context can be something as simple as a title for an individual fragment—the writing may be beautiful but the meaning is elusive.

Charles Bernstein suggests that “a poem may be easy because it is not saying anything” and that “[s]ometimes working out your difficulties with the poem is the best thing for a long-term aesthetic experience and opens up the possibilities for many future encounters with the poem.” Common Place is not an easy poem. It is brilliant and frustrating in nearly equal measures. It forces the reader to confront things that many would rather suppress. It is also a poem that is worth reading and rewards the reader’s efforts and invites future encounters.

Ryan J. Cox teaches literature and film at Keyano College in Fort McMurray, Alberta. He holds a PhD in English Literature from the University of Minnesota, and his research focuses on the intersections of identity, culture and poetics. His writing has appeared in Canadian Literature, The Journal of Graphic Novels and Comics, ESC, Carousel, and The Windsor Review.