Assdeep in Wonder by Christopher Gudgeon

Assdeep in Wonder by Christopher Gudgeon 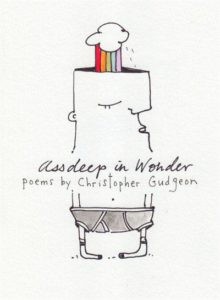 Christopher Gudgeon’s Assdeep in Wonder weds a raw, intense emotionalism to a wry, detached cynicism. Gudgeon effects a lot through his overarching tone, and it is easy to see some of his tactics at work in “The Causes of Heterosexuality”:

Scientists have looked, but cannot find,

the biochemical factors that underlie

This behaviour’s been observed in several species

and all sorts of primates, bonobos, rhesus

after a couple drinks they’ll pair off to fuck;

No one can explain these aberrant proclivities

despite the grants and research activities;

what compels the two sexes of one kind

Is it an inherent weakness? A character flaw?

but they’ll figure it out one day, I am sure,

then they can focus our efforts on finding a cure.

(“The Causes of Heterosexuality” 34)

Not rhythmic, but it rhymes — Gudgeon is accomplishing a lot under the radar here, while on the surface constructing the whole poem on a joke premise: viewing heterosexual attraction (rather than homosexual attraction) as an “aberrant proclivity” and producing a satiric reversal. The politicization/moralization of supposedly disinterested scientistic discourse is made obvious once the same language normally attached to “investigations” of homosexuality is instead fastened to heterosexuality, and the turn towards the “need” to find a “cure” recalls the historical medicalization of homosexuality, for example in the psychological field, as an illness. Gudgeon affects a biting but polished comic timing, shifting the tone extremely to great comic effect, as when the animals “pair off” after a couple of drinks. (There is also a nice possible allusion to the story of Noah and the Ark in the animals “pairing off,” although this is perhaps a stretch.) Gudgeon here displays his excellent comic instincts, abiding by the rule of threes and offering an exceptionally silly combination of animals — “polecat, American bison, mallard duck.” Following up the bison with the duck displays a masterful comedic touch.

Gudgeon is most skilled at these combinations of tone, at hurtling through comic lines before crashing into a wall of melancholy. In “Canadian Tourister,” he loops through and keeps building up absurd imagery to reach silly heights before settling into a small, sad moment:

Canada is a caribou on life-support

packed in the back of a panel van

driving No. 4 through Big Pond

it is a Russian stripper

she cinches the housecoat around her waist, blows a kiss

to the businessman nursing a pair of rye-and-cokes

who takes a sip and says to no one in particular:

she is like a poem or a twenty-dollar bill,

she is like a landscape painting of the tundra,

she’s the most beautiful thing I’ve ever seen,

she’s so, so lonely and so, so very far from home.

Gudgeon pulls off a trick here that a poet like David McGimpsey has mastered, parodying the tropes of conventional Canadian poetry alongisde related cultural stereotypes while simultaneously offering a turn towards serious reflection. This moment of reflection operates on a few interesting, odd levels. On one hand, it seems sincere, and the repetitions of “she is” and later the word “so” slow things down and help Gudgeon back off of the breakneck absurdity of the previous comic exaggerations. On the other hand, the final insight almost seems like a joke itself. Is this stripper, temporarily in the country on a work permit, the ironic “Canadian Tourister” of the title? Sex work and sex tourism make for unlikely subjects alongside more conventional Canadian stereotypes, and their juxtaposition at once seems like a joke and also like a commentary on the way that the nation operates as a screen for fantasies: fantasies of acceptance, of absorption into Canada’s cultural mosaic, and fantasy constructions in the form of the varied stereotypes. The suggestion arises that Canada’s fabled “cultural mosaic” is itself a fantasy construction, the truth of which is here laid bare in the economic/socio-political imbalances that allow the Canadian businessman the luxury of poetic rhapsodes while the Russian woman strips for his pleasure/as his muse, just so she can stay in a country where she doesn’t feel at home.

The masterwork of Gudgeon’s collection, perhaps, given the present historical context, is “The Revelations of Donald Trump,” which adopts a Trump-like tone while parodying Whitman’s “Song of Myself”:

I too sing, America,

because, like you, America, I am everywhere and all things, and

like you, I have come to set things in motion,

I too sing because I am meter and rhyme, America;

I too sing because I am melody, auto-tuned, sung by me,

my song is available on iTunes and Amazon the moment I intone it;

Oprah has it on her iPod,

(“The Revelations of Donald Trump” 71)

Gudgeon nicely captures, here and elsewhere in the lengthy poem, both Whitman’s manner and Trump’s mannerisms, while commenting on the cultural paradoxes (and paroxysms?) that have made the rise of Trump possible, particularly in a media-saturated world where due to media omnipresence (and, by extension, Trump’s omnipresence) it is simply less overwhelming to allow information to flow over and through you than to attempt to comprehend anything. The narcissistic excesses of Trump match the narcissistic bent of American culture at large, and in a strange way Trump is the obvious, ultimate endgame of the US cult of personality. The connection to Whitman might seem a mere joke at the expense of Trump’s self-serving narcissism but operates more complexly; arguably, Trump’s personality is the dark mirror of Whitman’s vision, a demagogue’s horrorshow inversion of Whitman’s beloved democratic individual.

Jonathan Ball creates idea-driven experimental horror and humour and helps others tell exceptional stories in exciting ways. He is the author of five books and lives online at www.JonathanBall.com.