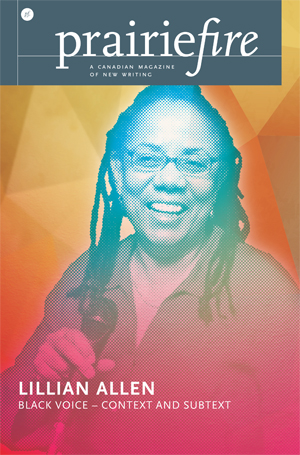 Our sincere apologies for inadvertently leaving off the third section of Michael Lockett’s poem “Oscar Diversifies his Tradecraft” in the winter issue. Here is the poem in its entirety:

Eavesdropping’s alright.
It was mostly uninteresting,
just Alice and Bob’s1 back-and-forth
binary babble. But I learnt a bit
through listening: I came to see
the swiftness with which patterns unfurl,
and zero and one as something
greater than nothing and something,
and that the dots and naughts tend to dance
when they stream en masse.

And I like that algorhythmic sway.
But the dancing, it is not always elegant.
It’s most interesting when it is, or when it’s strange,
as in stranger than parameters defined for dance,
like maybe this guy does not belong on the dance floor,
like Mr. Teacher at promenade performing the lambada
as a disco-robot would if it could gyrate arrhythmically
and sweat through its shirt and thrust its hips wantonly.

That’s the not good but interesting. It’s not good
enough to attract attention — sorry, ambivalent syntax —
it attracts attention because it is enough not good.
If by good we mean grace. Or normal.

Whatever code you’re looking for,
it’s a matter of imagining motion
in three-space in three-space,
like a flip-book in a flip-book,
except both books are misassembled,
so you tessellate frames in order
to see that which should not be.

1Alice, Bob, and Oscar are names used in cryptographic parlance to personify models depicting scenarios whereby A (Alice) sends encrypted text to B (Bob) which O (Oscar) intends to intercept and decipher.

Before long I found myself desiring
a different utility, something beyond
cyber fly-on-wall and data sift-and-seek.
I was looking for a way to enscrypt myself
within the work. So I turned
to classical cloak-craft curricula.

I enrolled in drama classes,
studied wardrobe and makeup,
purchased digital recording devices,
and infiltrated a hocus of magicians.
I started writing steganographic
sonnets and honing an espionage poetics.

Then came a spate of fraudulent phone calls,
a cultivation of sources and voices,
a community of contacts in which I wove myselves.
Then some sleight-of-hand gambling.
And cat-burgling. But not the theft kind.
I would only look. Just an assessment of skill and resource.

All that was before the dark,
before story and storage became omnipresent concerns,
before sound housekeeping and incendiary procedures,
before that which could not be cleaned had to be set to flame.

I tether my names to a tangle of yarns
I tangle in yarns and fertilize new selves
through digital in vitro, a delicate lattice
of data and e-commerce transaction.

I list obsessively:
X is what Alice said;
Y’s which I derive from X;
chronologies of Bob’s whereabouts
and the people with whom he meets;
objects required, desired, and those
through which DNA can be acquired.

These catalogues I chart Cartesianally,
coordinating targets according to heading
and stride-count from an axis I secret.

I extend this practice to myselves,
sleeping only after I’ve traced
their traces: the unclean, the null,
and those that are intractable.

The ritual became a surrogate prayer,
a pledge to the binocular dioramic,
to the two-dimensionality of it all.