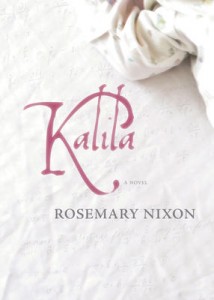 Kalila by Rosemary Nixon is the poignant story of a couple whose baby girl is born with severe medical problems, including an enlarged heart, very high blood pressure, breathing difficulties, and an undeveloped kidney. Born just under four weeks early and weighing five pounds, Kalila is transferred after three days to the Neonatal Intensive Care Unit of the Foothills Hospital in Calgary, where she undergoes a battery of tests to try to determine exactly what all her problems are.

The story is told primarily through the viewpoint of Kalila’s parents, Maggie Watson and Brodie Solantz, and occasionally from the viewpoint of one of the doctors, Dr. Vanioc. The chapters are headed by the individuals’ names, and to further differentiate the three viewpoints, Maggie’s sections are told in the first person, Brodie’s in the second person and the doctor’s in the third. However, it is only gradually that the reader learns who is talking and what has happened. Readers are like the parents: they don’t really know what’s going on. One day they’re told it’s such and such a problem; the next something different is suggested.

Maggie is overwhelmed with grief and spends most of her time at the hospital watching the baby, who is hooked up to tubes that feed her and help her breathe. Even during the times when Maggie is sent out of the unit because tests are being performed on Kalila, procedures that seem to torture the child, she continues to stay nearby. It is only when Maggie and Brodie finally make the decision to remove Kalila from the hospital and try to care for her at home that she manages to shake herself out the lethargic grief that has gripped her.

Brodie, a high school physics teacher, tries to immerse himself in his teaching so that he can forget what has happened, though he regularly visits the baby in the evening. He tries to make sense of life in scientific terms, looking for something solid in a world of uncertainty. (I have to admit that most of his science metaphors were over my head.) Only later does he accept that certainty and permanence do not exist except in one’s imagination. His efforts to comfort and understand Maggie sometimes help, but not a whole lot.

Maggie buys herself a 1000-page medical home dictionary and tries to look up and understand what seems like a foreign language to her – apnea, bradycardia, interstitial, one term after another. “It’s been nine weeks. Can’t you just give it a name?” she begs (61).

Related in short chapters, with short, snappy sentences, often mere fragments, and a lot of white space, this book could be read quickly − but it shouldn’t be, or if one does read it quickly, then it deserves a reread. There’s a lot to think about here, a great deal of underplayed emotion, literary allusions to the Bible and Le Petit Prince, lines from hymns and songs, and scientific terms and information. The sparse writing makes some sections read almost like poetry, as do some of the terse descriptions. I was impressed by many of these, such as the description of smokers huddling outside the hospital on a cold, windy day. Particularly poignant is the way in which Brodie imagines the neonatal unit as a place filled with little glass castles, each housing its own prince or princess with a sorcerer in a great white cloak who is in charge of making decisions.

The story is a sad one, the pain heavy, and some readers may decide not to read it on that account, but that shouldn’t stop one from reading a good book − and, indeed, there are some comic interludes, such as Brodie’s snappy interchanges with his indifferent students.

Rosemary Nixon writes from personal experience, having had a very ill child in a neonatal ward many years ago. But she penned this novel over a span of 15 years, so it is almost as if she is writing from a distance.

Donna Firby Gamache is a writer/retired teacher from MacGregor, Manitoba. Her newest work is Sarah: A New Beginning, a novel for children, loosely based on the coming of her great-grandparents to Canada in 1891.