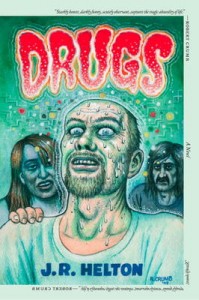 The use of drugs is a fact of everyday life as well as the subject of significant literary scrutiny, ranging from the avant-garde to the conventional in both form and content. While many stories of pharmacological exploration are closely aligned with traditional notions of sin and redemption, a few describe the ingestion of mind-bending chemicals as efforts to achieve spiritual transcendence. Many others present the act of getting high as an outlaw badge of non-conformity. And some examples of memoir, essay, and literary fiction combine elements of each of these approaches.

Texas author J.R. Helton’s new book Drugs resists simplistic narratives about the ethics of substance use, lawful or illicit. The novel describes one man’s journey from teenage years to middle age with a specific focus on his use of mind and body adulterants that range from alcohol to opiates, from cocaine to sleeping pills. For Helton’s protagonist Jake, using drugs is sometimes helpful and other times harmful, part of the fabric of a life not necessarily too different from any other person’s. This enlightened and somewhat uncommon approach is complemented by Helton’s smooth and entertaining prose style.

As the books opens, Jake is an under-age suburban teen who gets a job in landscaping. Taking up pot smoking to make the labour’s monotony bearable, over the course of the summer he convinces his adult colleague Kevin to share the rest of his stash, which also includes coke and heroin. While this doesn’t quite lead to an immediate downward trajectory of addiction and despair, it does initiate a lifelong interest in experimentation.

Helton’s first-person narration is highly readable, a fully formed character offering intimate descriptions of activities that, in our drug-prohibitive culture, are normally experienced behind closed doors. Drugs reveals Jake’s path from an initial career in physical labour toward an eventual role as a writing instructor – a journey shared by the author. We follow along as Jake moves in and out of Texas towns and romantic relationships, growing up and growing old. One constant, though, is the narrator’s inner restlessness and tension, and his desire to employ various substances as means to quell a lingering psychological disquiet.

Drugs offers smooth, engaging writing and an informed perspective on its subject matter, but the book is not perfect. The novel’s structure deters in some ways from its effectiveness. And Jake occasionally veers into editorializing about the politics of the “War on Drugs” that, while knowledgeable, is distracting. The logic of the arguments is sound but these instances of “telling” rather than “showing” are unnecessary, adding little in terms of either character or theme.

Although Helton’s prose style is straightforward and unadorned, the book’s structure eschews a linear narrative in favour of a catalogue approach where each section of the novel is devoted to experiences with a particular substance, suggesting the drugs themselves are characters in the story. For instance, three chapters detailing Jake’s relationships with a bunch of very peculiar coke dealers while married to his high-school sweetheart Susan are immediately followed by two chapters set further ahead in time, in which he recounts subsequent binge drinking with his next wife, a somewhat uncontrollable and occasionally violent woman named Karen.

This authorial device has mixed results. On one hand, the process of moving back and forth evinces a layered effect, generating a meditative feel well suited to nuanced character development. Through the shifting sands of time a portrait emerges of one man’s changing relationship to substance use – a youthful and urgent desire for stimulants giving way to an older man’s more reflective search for peaceful and ecstatic experiences with other drugs.

But enumerating a compendium of every substance the character has ever taken is at cross-purposes with effective narrative drive. Some of the numerous examples – such as a brief flirtation with the use of nitrous oxide (aka “laughing gas”) to get high or a one-time encounter with a PCP-spiked joint – seem so tangential they could have been easily excised, given how little they add to our understanding of the character or to moving the plot forward.

There is much to admire in J.R. Helton’s Drugs. In a culture laced with so much propaganda about illegal drug consumption, the author’s straightforward approach is refreshing. He doesn’t shy away from including explicit sex either, and many comedic touches – such as a repeated invocation of the music of Julio Iglesias as a motif to highlight the quirks of a particularly kooky female cocaine dealer.

The book might have benefited from a less fractured and more orthodox structure, especially given Helton’s fairly conventional approach to prose. Indeed, one of his greatest strengths is as a traditional storyteller. The longer sections, such as Jake’s battle with painkillers after back injuries and the lengths to which he needs to go – from dodgy clinics to Internet mail-order operations to a precarious cross-border junket to a Mexican pharmacy – are some of the book’s most engaging aspects.

Overall, Drugs does more than provide a unique perspective on the titular subject matter – it’s a well-considered examination of love, life, aging, and the many ways all of us simultaneously seek to both face, and escape, reality. ♦

Shawn Syms has written extensively about drug use – real and fictional – for publications including The Rumpus, Spacing, Xtra, Eye Weekly, The Globe and Mail, and the award-winning anthology First Person Queer.