The Sometimes Lake by Sandy Bonny 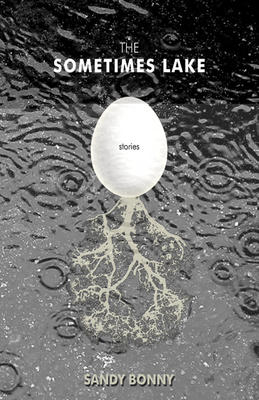 Science and mathematics are never far away from the consciousness of the characters in this first collection of twelve short stories by Saskatoon’s Sandy Bonny.

The story “Sense” follows a female archaeologist named Alwynne on a field trip into the wilderness:

Rather than spend her mornings and evenings driving to and from the canyons, Alwynne was camping on site largely so that she could spend time sieving the riverbed – a painstaking, hit-and-miss, but occasionally exhilarating means of isolating some of the most beautiful artifacts of early Plains Culture. Glass beads, tin beads, iron beads, awled porcelain beads, and every now and then a quill. (140)

Suspense builds as the sun goes down and Alwynne tries to go to sleep while hearing a variety of sounds and noises. She is less apprehensive about the wildlife than she is about the human voices and car doors slamming.

“Sense” stands out from some of the other stories because of the clearly expressed motivation, the straight-ahead narrative, the vivid description, the authenticity of the details. You the reader are right there with Alwynne, who feels confident and resourceful but is still experiencing some trepidation. In a few of the other stories, the narrative seems needlessly convoluted.

“Tell” is a quirkily effective story in which the female narrator, a librarian, is distraught because her ex-boyfriend is about to marry her ex–best friend. After making an attempt to slit her wrist, she heads for solace in a cafe that is featuring a live storyteller. A “granola girl” who recognizes her from the library sits down at her table: “She told me that she always admires my French braids. She was grinning and it was a nice thing to say, but I find it hard to react appropriately to compliments from strangers. I often lie.” (63)

Early in the story “Tango Medio,” the female narrator says, “I decided I had to break up with Darryl when sex started to remind me of baking” (128). While she bemoans the routine circumstances of life with Darryl and his beekeeping parents, she also relates some fascinating details about bees. And the story does take a melodramatic turn that injects some unexpected excitement into the relationship.

In “Nògha,” Jens is a substitute teacher trying to convey some aspect of math and science to a mixture of ages and temperaments in a northern school. In a milieu of near-chaos that includes rampant vandalism, he fixes upon the study of eggs becoming chicks to meet the vice-principal’s stipulation, “keep your class interested and in order” (13). “Oh, they know where babies come from,” the school social worker tells him. “Stacey has two at home. Hmm, and Darren has two in the oven, two ovens.” (16) “Nògha” first appeared in the winter 2009–10 issue of Prairie Fire.

Human reproduction is at the core of the fine story “Carys,” in which middle-aged mathematics professor Michelle has been trying to become pregnant with husband Matthew, also a math prof. She has had four conceptions but has miscarried each time. She reaches ten weeks of a fifth and the doctor describes the embryo as a housefly. She wonders why he chose that particular image:

A lentil or coffee bean is the same size. A ladybug. There are nicer objects in that size class. But the doctor had said not much bigger than a housefly and she could see one now. Appearing to hover, wasp-like, near the lamp sconce above the porch where a movement of air twisted the web that the fly had been caught in. . . . [The doctor] had assured them that their embryo was developing normally. But it was obvious to Michelle now . . . that anything capable of coming to life is also capable of dying. That women of child-bearing age are equally capable of hosting death. . . . The irony was the previous twenty years of birth control. (51)

At an academic conference in the United Kingdom, Michelle sees a young woman presenter named Carys who could be her daughter, if only . . . By turns heart-rending and funny – with some contrasting asides involving Matthew and their dog – “Carys” is an example of what a story should be: rich in character, thought-provoking, and satisfying. ♦

Dave Williamson is a Winnipeg writer whose latest novel is called Dating.