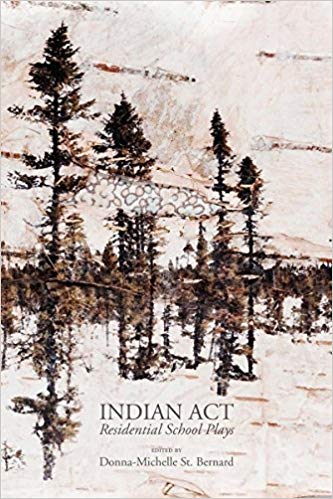 The system of residential schools that existed for 150 years until the last school closed in 1996 has left a legacy of trauma that is likely to endure for generations to come. The playwrights in this collection, says St. Bernard, have begun the needed work of addressing this history and seeking to come to terms with it. “They have generously opened very personal wounds,” she says, “dug deep into research they can’t shake off,” and they hereby “outline a trajectory of impact that is not yet completed” (pg. x).

Seven plays are included in this anthology. Two are full-length plays: Bunk #7 by Larry Guno and God and the Indian by Drew Hayden Taylor. Two are longer one-acts: “A Very Polite Genocide or The Girl Who Fell to Earth” by Melanie J. Murray and “kihew” by Curtis Peeteetuce. The remaining three plays are one-acts of under 30 pages each: “Nohkum” by Michael Greyeyes, “They Know Not What They Do” by Tara Beagan, and “Dear Mr. Buchwald” by Yvette Nolan. All but one play, Guno’s Bunk #7, have received productions, with those productions coming in the last ten years or so. Beagan’s play was produced for the Native Earth Performing Arts Made to Order program, though no productions dates are listed.

Of the seven plays in the collection, only one, Bunk #7, is set entirely in a residential school setting. The other plays are all set in the present and look back to the past, focusing mainly on residential school contexts in the 1940-1960 period. Bunk #7, based on the author’s life, is also the only work in the collection that is written by a residential school survivor. It tells the story of (Edward) Gray, 18, who enters a residential school in Alberta after a number of years in a sanatorium recovering from tuberculosis. The play is set in the early 1960s, when political and cultural change is in the air. The character of Gray, who dreams of becoming a lawyer, ends up as a reluctant student leader in his new school when the students organize a student union to represent their interests. This is an endearing play, rich with humour and pathos, about a diverse group of six teenage students who struggle against the system and challenge their teachers, even as the students suffer deprivation and abuse. The play deserves a long life on stage. As of this writing, it may soon receive its first, full production, following a complicated history of workshops, readings, and near-productions both before and after the author’s death in 2005.

Drew Hayden Taylor in his play God and the Indian dramatizes an encounter in the present day between a residential school survivor and a former teacher of hers who abused her sexually at the school. Johnny, a scrappy “panhandler” in her early 50s, follows her former teacher, George King, from a chance meeting at a doughnut shop back to his office where he works as a newly promoted Anglican Assistant Bishop. What ensues between the former teacher and student recalls the premise of Chilean Ariel Dorfman’s play Death and the Maiden, in which a female character confronts the man who tortured her when she was held as a political prisoner. Johnny, like Paulina in Dorfman’s play, is a skillful and wily  interrogator who works her superior into a corner. Denial becomes no longer possible for a man haunted by the memory of what he has done but kept repressed all these years.

In Peeteetuce’s “kihew,” a more conventional memory play than God and the Indian, a female character in her 50s (or 60s) finally confronts her residential school memories, but here the character (Patricia) has made a stable life for herself on a Cree reserve. When the play opens, Patricia is grappling with a decision to make: should she accept financial compensation under the Indian Residential Schools Settlement Agreement or opt out of the settlement process? In reaching a decision, Patricia remembers the recent experiences of her grandchildren who broke into a boarded-up residential school that she had once attended with her sister MaryAnne. Her grandchildren’s supernatural/spiritual experiences in the school ultimately lead Patricia to find release from the hold that the school has had on her. In her final speech, Patricia reflects on her future: “I don’t know what happens from this point on. I can only pray that the road ahead is filled with healing. I believe my prayers will be heard . . . and because of that, I have hope (pg. 344).

Less hopeful, however, are two expressionist plays in the collection: Beagan’s “They Know Not What They Do” and Murray’s “A Very Polite Genocide or The Girl Who Fell to Earth.” Both plays are dark in tone, but understandably so. They depict characters living in nightmares they cannot escape from, their fates having been determined years earlier when they first set foot inside their respective schools. Beagan’s play examines the residential school experiences of the very young, each of the four children portrayed ranging in age from 5-8 while coming from different backgrounds. Two of the children are Métis (Brielle and Elizabeth), one is Iunk (Annie), and another (Donald) is of an unspecified First Nation. They attend schools operated by three different Christian denominations (Anglican, United and Catholic), but the children’s grim experiences in each school do not differ. They arrive at school confused and anxious at having been removed from their homes and taken into an institutional environment where they are disciplined and broken down by their teachers. Two of the children survive into their senior years, long enough to hear the words of former Canadian prime minister Stephen Harper when he apologized for Canada’s role in setting up and administering the residential school system. The play concludes with Harper’s apology played in a “sardonic loop” (pg. 159).

Murray’s play explores the inter-generational effects of residential school and its aftermath on a single family. It weaves together two complex narratives through the characters of Martin Drunken Chief and his granddaughter Josie Pichette. Martin opens up about his life during a sharing circle at a centre where he’s an elder. His story returns to his early residential school experience; his romance with Mary, whom he meets at school and later marries; and his loss of their son Robbie, whose own tragic life becomes a major narrative strand in the play. Josie’s story emerges from a university project that she presents on the adopting-out of Indigenous children into non-Indigenous families. Her research leads her into the history of her own family, though she tries at first to keep her personal history out of it: “The government began dismantling residential schools, and instead took children from their parents—often without consent or through deception—and placed them with adoptive non-Aboriginal families. My mother was . . . The children faced cultural and identity confusion and didn’t fit anywhere. I. They . . . ” (239). Josie’s project and Martin’s story bring the two of them together after a powerful and wrenching portrayal of their family history. The inclusion in the play of a character (Rougarou) from Métis legend adds a dark resonance to the struggles of each character.

The collection opens and closes with two short autobiographical works by Michael Greyeyes and Yvette Nolan respectively. The play by Greyeyes, “Nohkum,” integrates dance and movement into a poignant, personal monologue delivered by a Narrator. He tells the story of his father’s side of the family, more specifically, the story of his grandmother, nohkum, abandoned by her husband and left without means to raise two little children on her own, one of them the Narrator’s father. His father survives those early years when they were forced to live in a tent through a bitterly cold prairie winter. His nohkum saves her boy’s life, says the Narrator, by taking him to the residential school at Duck Lake when he turned five. The Narrator pieces together the uncertain fragments of his grandmother’s life, a woman he barely knew from his family’s infrequent visits to her wood-heated shanty. Yet the play celebrates nohkum’s life in a dance of light that concludes the Narrator’s portrait of his grandmother.

The final play in the collection, Nolan’s “Dear Mr. Buchwald,” is presented in the  form of a letter written by the author to a lawyer, Richard Buchwald, whose firm negotiated a $19,000 residential school settlement for the author’s mother, Helen Nolan. Three actors narrate the letter, which is accompanied by projections of photographs from Helen’s life and an excerpt from the 1996 Report of the Royal Commission on Aboriginal Peoples. The letter records important periods and moments in Helen’s life such as her years in a sanatorium, her marriage from out of residential school at the age of 17, and her successful application to have her Indian status restored. The letter also includes a passionate commentary by the author on the law firm’s role in representing her mother’s settlement claim. The play, which was commissioned by the Osgoode Hall Graduate Law Students Association, seeks to remind those in the legal profession that they are enriching themselves on the basis of “decades of harm” done to the “First Peoples of this land” (pg.353). Implicit is a comment on the dignity and value of the lives of those individuals, like Nolan’s mother Helen, who stand behind each residential school claim.

In his forward to Indian Act, Daniel David Moses says that the plays in this collection “show us how to heal” (pg. vii). Presumably, he is speaking about all of us, all Canadians, Indigenous and non-Indigenous people alike. Each of these plays reveals the long-term, generational damage and suffering that was caused by the cruel and inhumane treatment of Indigenous children as part of what has come to be recognized as the federal government’s perpetration of genocide.  Moses asks: “When will we stop, these plays should help us wonder, beating the kids?” (pg. vii). These plays do pose such questions, and it is only by asking such tough questions and perhaps even by making provisional replies to them that the healing process can begin.

Dale Lakevold is a playwright from Minnedosa, Manitoba. He teaches English and creative writing at Brandon University. His play Misty Lake, co-written with Darrell Racine and published in 2000 (Adler & Ringe) and in 2006 (Loon Books), is a residential school play about healing.