The Year of No Summer: A Reckoning by Rachel Lebowitz

The Year of No Summer: A Reckoning by Rachel Lebowitz 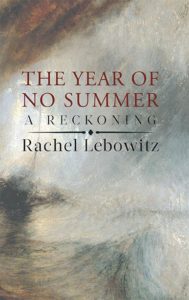 In The Year of No Summer, Rachel Lebowitz weaves history, mythology, folklore and personal experience into a vibrant lyric essay. Letters from the frontlines of World War I, grim tales about famine, Greek legends, reflections on tourism, museums, and motherhood are all narrative threads, drawn together by Lebowitz to craft a richly textured analysis of the events that followed in the wake of a rarely discussed meteorological event.

In 1815, Mount Tambora, an active volcano in Indonesia, erupted. At least 71,000 people died in what was the most devastating eruption in recorded history. The stratosphere was so filled with ash that it altered weather patterns throughout the coming year. North America saw snowstorms in June. Crop failures led to widespread famine in Europe, and a typhus epidemic ravaged Ireland. People, desperate for reassurance, turned to religion as demonstrated by packed churches and the flowering of new cults.

At first glance, The Year of No Summer may appear to document bizarre weather patterns but, upon closer inspection, people, and their reactions, are the real focus of the essay. In an interview with Peter Robb[1], Lebowitz was asked if she wrote The Year of No Summer as an allegory for climate change. She did not. In her words, she “. . . wrote it about the human response to calamity and to weather over the centuries.”

Lebowitz excels at rendering large, historical events, making them immediate and intimate. In “Tambora,” she imagines the body of Mary after the birth of Jesus.

Was she constipated for days? Did she bleed for three weeks after? Did her milk come in on the third day? Was it enough? Did her nipples hurt so much that when He sucked she screamed? (p. 42)

As in the example above, it is often through images of a mother and child that Lebowitz grounds her reflections. In “The Garden of the Fugitives,” she ruminates on her visit to Pompeii, where she saw the cast of a woman.

The mother’s head is up, she’s looking at her son, but he doesn’t see, he has his head down, he’s already dead. Maybe she is too. It’s so hard to know. It’s so hard to watch this, to stand and stare at them through glass. (pp. 55-56)

I could not recommend The Year of No Summer more highly. Through her words, Lebowitz brings us to far away places—Pompeii, Mount Tambora, London—and presses our noses up against the glass, helping us to see what might otherwise be forgotten.

It is a compelling read, both entertaining and illuminating. It is not, however, a quick or easy read. As a longform, lyric essay, it requires the reader to actively engage with the text: to make connections between segments, to reflect on the whole, and to accept that they will close the book with more questions. To accept that even the author has no answers. As Lebowitz writes at the end of my favourite chapter, “The Last Frost Fair”:

If there is wisdom, it’s nothing I know.  It’s all just birds and storms and hauntings. We look behind and scoff, as if those ahead aren’t doing the same. (p. 53)

Weeks after putting the book aside, I return to this sentence. Lebowitz may not have intended to write about climate change, but The Year of No Summer can be read as a cautionary tale. One that prompts me to better understand the current state of our environment and my relationship to it. To wonder what those a hundred years hence will think of the choices we make today.

Shelley Marie Motz writes about culture, place and identity from the unceded traditional territory of the Songhees and Esquimalt First Nations. Her poems and essays have been published in print and online, most recently in Room Magazine, The Timberline Review, Plenitude Magazine and the Globe & Mail. Her reviews of Rules of the Kingdom and 29 Mennonite Poets were also published by Prairie Fire online.