The Effects of Isolation on the Brain by Erika Rummel

The Effects of Isolation on the Brain by Erika Rummel 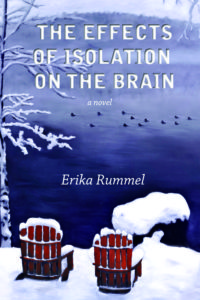 How does an emotionally deprived childhood affect one’s behaviour as an adult? To what extent does sexual abuse leave emotional scars? These are two issues addressed in this debut novella by Erika Rummel. Set in Ontario and in post World War II Vienna, the story is a suspenseful thriller about betrayal, loss, boredom and deceit in the lives of two female characters.

Ellie, the 21 year-old protagonist, left her homeland of Vienna in 1960 to study romantic poetry at the University of Toronto. The novella takes place over the course of seven weeks during the winter of 1961. Ellie has become involved in a murder and she has been hiding for a month at a remote cabin a few hours north of Toronto. Her friend Vera was supposed to drive her to the airport in Timmins, but hasn’t shown up. As Ellie’s anxiety continues to escalate, so does the reader’s curiosity at how Ellie ended up in this situation.

Written from Ellie’s point of view, the novella’s lean, succinct first-person narrative unfolds in twenty-one brief chapters. The story is structured as a memory that Ellie recalls while she waits for Vera at the cabin. The last two chapters propel the story forward from the point at which it left off in the first chapter.

The narrative hinges on Ellie and Vera’s evolving relationship and the neediness of both women. Naïve and insecure due to her bleak upbringing, Ellie is flattered by the attention of Vera—a beautiful, enigmatic Canadian woman fifteen years older. As Ellie describes their meeting, “Something wonderful had happened. Vera Katorski had stepped into my life and acknowledged my existence. She was like a sacrament, a soul-animating strain. Wordsworth.”

However, the unscrupulous Vera has her own demons; not only was she sexually abused by her adoptive father, but she also has serious mental health issues. As the friendship between the two women progresses, Ellie’s loyalty to Vera hijacks her judgment, resulting in some bad decisions.

Throughout the novella, Rummel convincingly delineates the source of Ellie’s vulnerability, pointing to boredom as a factor that she will do almost anything to avoid, even at the risk of offending her moral code. As Ellie states, “When you are bored, the call to action becomes irresistible. Any Call. You say yes even if you know it will get you into trouble. I’ve been groomed from childhood to say yes to action.”

Also noteworthy are the details from Ellie’s childhood in Vienna. These tidbits help to authenticate the post World War II atmosphere as observed by Ellie as a child. Especially revealing is the interpretation of her parents’ conversations about the war, for she doesn’t fully grasp the context. For example, “Forty-five came up a lot in people’s conversation. I thought of it as a magic number, a before and after number.”

In short, The Effect of Isolation on the Brain is a gripping, fact-paced story about an unusual relationship and set of circumstances. The book will undoubtedly appeal to readers who enjoy thrillers with a historical context.