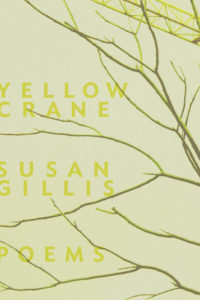 As I write this review from Halifax, a yellow crane lays crumpled at one of the city’s busiest intersections. Toppled over during September’s post-tropical Hurricane Dorian, the crane has remained lodged in the side of a downtown high-rise, looking at times reminiscent of a yellow tabby draped over an armchair and, at others, like a praying mantis in need of a little redemption. The crane is the reason for the Government of Nova Scotia’s localized state of emergency, but the scene at the intersection is far from chaotic; callous locals have become curious tourists, gazing at the scene through the chain-link fencing, taking photographs on smartphones and marvelling at the wreckage. The crane has become something of a symbol; of ill-preparation for the storm, of a cityscape thwarted and dashed by the natural environment.

The yellow crane, too, is a central tenet of Susan Gillis’s latest collection of poetry, although it isn’t Halifax’s–it is Montreal’s. Observing from her apartment window, Gillis measures the crane as both a disruption of the horizon and a grounding landmark, noting in the 17-page poem “Ode” that “the crane’s yellow arm / is what I lean on when I lean / into the place that had just been the view” (53). The crane, suspended outside her window, is a symbol of change but has also, in the frustrating tradition of unending inner-city construction, become an image of familiarity. Gillis holds these two opposing views in tandem, negotiating the tension between the support and the destruction of the urban world.

Yellow Crane comes as Gillis’s fifth collection of poetry–the first since the 2013 publications of Rapids and Whisk–and was a finalist for Montreal’s 2019 Grand Prix du Livre. She is a poet concerned, largely, with the ecologies both natural and man-made that structure our lives. Noting the shift in the way we write about nature– “this is how we don’t write anymore,” her narrator claims in “Obelisk,” “stone walls, hayfields, ruins, the beauty of ruins” (2)– Yellow Crane imagines new ways of framing and reframing the notions of civilization and ruin in both their devastation and beauty: “amenable, tolerable, useful, pleasant, beautiful, ravaged, ruined,” (11) Gillis invites us to regard the land.

=Though the tone of many poems is mournful, regretting the loss of libraries destroyed by human action (5), airplanes cutting across “the former wilderness of sky” (10) and “machines / dismantling a village,” (18) Gillis’s reframing also involves new ways of finding beauty and joy in the city’s midst. In “So I Beg You, No More of These Lamentations,” her narrator considers a bright puddle, “expanding in its brightness/ as the sun crosses the parking lot, slowly, / and one by one particulars assemble: grit, / muck, rubbish, dirty cars, concrete curb, the red brick wall and darker bricks / among them” (47). Her descriptions are long, mesmerizing, and utterly enchanting — until the illusion ripples as a “beautiful doe, releasing my gaze, bounds through” (47). The landscapes Gillis pens distill brief moments of beauty between the human drive to construct, create, and build, and the natural world’s negotiation of these spaces for movement and survival.

Yellow Crane is both an ode and an elegy to landscapes that change. “My city, though ugly, broken down, grit-whipped, stricken,” her narrator writes, “is also vibrant, shrill in the way summer insects / are shrill, calling out for their lives” (68). It is a city in constant conversation, and there is a beauty in its unlikely exchanges: in “say[ing] something friendly to someone who’s not my friend, who / hurries past me toward a young woman who is waiting, clearly in love” (54); in the reflective surface of an oily puddle, alive with the ripples of a deer’s crossing; in the light reflecting from metal, from the spindly limbs of a tower toppled, from the crowd that gathers, murmuring to each other, to watch the irony of a yellow construction crane, deconstructed.

Alexandra Sweny is a student and settler currently living in K’jipuktuk (Halifax). She is completing her undergraduate degree in English and journalism, with plans to pursue her studies at the graduate level. Her favourite colour is yellow.
This entry was posted in All Reviews, Book Reviews, Poetry. Bookmark the permalink. Both comments and trackbacks are currently closed.