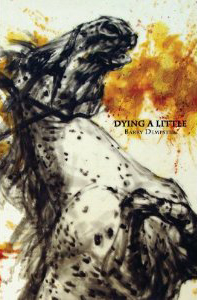 Don’t think that because Barry Dempster has published four books of poetry in three years you can slide your eye past Dying a Little.1 This book is exceptional – carefully structured, beautifully written without a false word, taking us face to face with illness, death and grief, and turning back at points, to life. By the end, we have experienced the other world without ever leaving the poet’s home territory north of Toronto.

Dying a Little is first of all an extended elegy for the poet’s friend, Cathy Stanley, who died at fifty of breast cancer. The title poem, set in late summer under a flaming sunset, brings us into a circle of friends, sitting near a paddock, talking about “sweetest Cathy,” “whose joy of a breast, burst into a homemade bomb / of cancer cells, had now metastasized (25).

Eventually the friends turn the conversation back to life, light candles, refill their glasses.

The book turns through the seasons of Cathy’s last year of life, moving into grief, back toward dailiness, as this poem does. And through the year, the poet and others die a little. The poems introduce us to the poet’s dead parents, still alive in the shrine of his heart – his father’s last lemon of a car still in his driveway – take us to his family cottage, consumed to the point of disintegration by termites, to hospital accompanying other friends in their illnesses and to the poet’s consciousness of the “dead man” inside him consuming half his carrot cake, through awareness of the joys and pains of the body, strung between living and dying.

Two of the major images that recur through the book are double-edged: driving (introduced in the title poem and recurring in “Drive 1: Distant” and “Drive 2: Risk”), image of the arc of life but also of the drive toward death; and gardens/flowers, a traditional resolution in elegy, which assure us of renewal: “What else is a spring bulb/but reincarnation?” (“Tulips,” 78) but in the same poem: “The dead have plotted tulips / around the cemetery gates.” And in “Giving Away the Garden,” the gardener, probably Sharon Wilston, who appears in the poem’s dedication, sings to plants “in a small grey voice, the way a rain cloud / would if it wasn’t such a soggy wreck” (71) but also digs up her plants with “the kind of pressure / it would take to break a neck.” Tender, powerful digging, with just the gentlest reminder of digging graves.

The final poem, “Death Date,” is an elegy for Cathy, with her dates (1956–2006) – too young! The poet, driving, sees a red-tailed hawk: “Would you think bird or angel?” and turns around to glimpse Cathy’s rareness in this bird. The resolution, as far as there can be one, is that those we love never entirely leave us:

As long as I remember that death
is a new relationship, not a gaping hole,
I will walk the woods for you, drive
the highways, sing the undeniable songs. (96)

In this poem – in fact, in this book – the great themes of dying and living, fear and love, loss and consolation, emerge with great power from contemporary dailiness.
Barry Dempster is a master of pulling poems out of the everyday, opening the moment into something larger, even as it remains itself. Here’s an example from “Building Stairs”:

. . . The world takes shape
an inch at a time – Adam the finger, the wrist,
the climb to collarbone. A staircase ascending
from the insolent sand, becoming air, becoming sky.
Mike’s head appears from a sawdust cloud, reminding me
that once upon a time the moon was just an idea. (87)

The stair builder as God – who would have thought? The “finger” here, emphasizing creation, also picks up the fingertips in “Dying a Little” and the “tiny fingertip tumours” in Cathy’s brain in “Big Mistake” (48). That’s how tightly this book is woven.
“Building Stairs” works out the parallels between stair building and art/creation in writing so smoothly we almost forget we’re seeing something for the first time. But the stair building is essential in a book about dying a little. It’s an answer to the cottage devastated by termites, and it’s a reminder that things take shape and (as the poem concludes) that there is reason for faith, even in the face of so much that seems senseless. But it’s a modest answer, even though the passage reaches high.

Elizabeth Greene has published two collections of poetry, The Iron Shoes (Hidden Brook, 2007) and Moving (Inanna, 2010). She taught English at Queen’s University for many years. She lives in Kingston, Ontario, with her son and three cats.