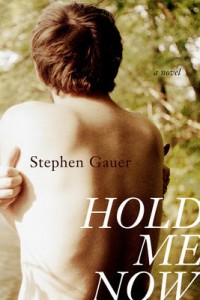 Hold Me Now is told from the point of view of Paul Brenner, whose son was beaten to death by a group of homophobic young men who came upon him running naked in Stanley Park. Although Stephen Gauer in the acknowledgments mentions a real-life source for his novel, he notes that his story deviates from the original in some of its most central details, with even the age of the victim changed from real-life Aaron Weber’s forty-two years to the fictive character Daniel’s twenty-seven years. I had the privilege of reading the short story that won the short fiction prize for Prairie Fire (reprinted in John Metcalf’s 10: Best Canadian Short Stories) on which Hold Me Now has been based, and have been able to note where the novel branches off to explore aspects of the story in more depth (whereas the short story perhaps creates a greater immediate impact). Nevertheless, much is gained in the longer version, including the development of Brenner’s personality and some of the other characters in the novel, including his elderly mother and daughter Elizabeth.

Most interesting in the novel is the process of Brenner’s bereavement, from his initial horror and mortification when he cannot bring himself to talk to gay supporters and an overbearing reporter, to his dream in which he identifies so thoroughly with his son that it is he who finds himself running through the park and experiencing every blow:

He would fall and they would stop, and he would get up and start to run again and they would chase him and beat him, and this cycle repeated without end because he wouldn’t stay down and refused to die. They shouted his name over and over again. Then he heard a woman’s voice say “Dad are you all right?” and that’s when the black forest dissolved suddenly into a fog and he knew it was a dream. (80)

The steps in Brenner’s recovery from grief and his development as a character are subtle and well placed. Although Brenner considers himself to be a liberal-minded individual, we sense that he harbours a repressed intolerance for homosexuals. After Daniel’s death, Brenner shies away from talking to the gay men who were his son’s friends since not only does he view them as “other,” but he sees them as wanting to use Daniel’s death to strengthen their cause. When Elizabeth asks him why he has refused to talk to them, this enigmatic conversation ensues.

Gauer deftly allows Elizabeth’s comments to her father about his limitations to influence the reader’s assessment of him.

Gauer uses some virtuoso story-telling techniques, as when, in parallel to his son’s discovered dangerous lifestyle running naked along “the Stroll” to assert his gay identity, Brenner (who has already failed at marriage) loses interest in his steady girlfriend, Gwen, and takes up with couple of prostitutes. First, however, Brenner in suppressed anger nearly rapes Gwen in his former wife’s house, and then actually does so when he takes her home to his apartment. Whereas the first time, his lust is animal and mindless in its pent-up grief and frustration, the second time Brenner abjectly finds that his sexual appetite is uncontrolled and cannot be satisfied:

This time he felt as though he would never come, that he would simply push and press and push again and never be finished. That would be a kind of hell, he thought, like food you couldn’t swallow. He held her arms down and kept pushing and pushing as though her body belonged underneath the floor instead of on top of it. She panted and tried to bite his lip. He spoke without mind or thought, gibbering senseless words that came out of his mouth and lay about him like heaps of rotten food, smelly and corrupted. (70)

With this Tantalus-like affliction, he finally experiences a “misshapen orgasm without length or breadth,” and we see how grief has depersonalized him, and how his hate and desire for revenge have turned on himself.

Only later does Brenner learn to love, and we see this growth in his character as his attitude towards his mother changes from bare tolerance for her quoting poetry (Dylan Thomas’s famous villanelle “And Death Shall Have No Dominion”) at his son’s funeral to appreciation for her small bravery in refusing to take medication for depression. After she suffers a stroke, Brenner helps her into a wheelchair, and her first complete sentence, “Hold me, Paul, hold me now,” marks a triumph that the reader shares with Paul. The echo of the novel’s title marks this scene’s importance, showing as it does one human’s unconditional love for another and a reconciliation in which differences are put aside.

A small scar from dry-walling his apartment reminds Brenner of the time his son attempted to commit suicide and he cut him down from the basement rafters. Paul remembers Daniel falling on top of him and being knocked out for a moment, then realizing that they were in each other’s arms and that his son, in holding onto him, was expressing a contradictory desire to live. The flashback is one of the most moving scenes in the novel, capturing the son’s angst and the father’s alarm and pain followed by his relief and reaffirmed love for his son:

What the story loses in succinctness from its development into a full-length novel it gains in complexity. Here is a well-written novel that explores Brenner’s growth as a human being and his ability to love and forgive. The scene near the novel’s end, when Brenner visits the ringleader among Daniel’s killers, Curtis Fielding – who has just been released from prison but still remains under custody – and charges him with his son’s death, then finds himself knocked down and punched in the ribs by Curtis’s father, has the elegance of Greek Tragedy. Although I admit that I did question the completeness of Curtis’s repentance, since I have been led to believe that prisons, far from being places of improvement, often make their inmates more hardened, I did appreciate the structure of the story. Nevertheless, I felt that the plot might have been more credible had Curtis been, not the ringleader, but a misled tagger-on with second thoughts. But then the villain might not have been so interesting, since he would have had less distance to fall and hence rise in the reader’s estimation (or so Aristotle might argue). p

gillian harding-russell has published three poetry collections, most recently I forgot to tell you (Thistledown, 2007). The chapbooks Maya: Poems for the Summer Solstice (Leaf Press) and the Stories of Snow (Alfred Gustav) came out this year. Poems have recently been published in Windsor Review, The Antigonish Review, and Goose Publications (an online nature and environmental journal). Poems are forthcoming in the anthologies That Not Forgotten (Hidden Press, 2012) and Poet to Poet (Guernica).