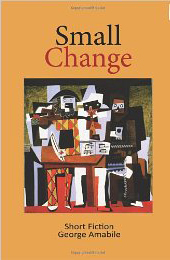 Perhaps there are some septuagenarians out there who remember George Amabile as a fixture of the folk-singing circuit, but mostly he is known as a poet and retired University of Manitoba English professor whose work has been published in such notable journals at The New Yorker and Harper’s. There might be others who recall him as the editor of a University of Minnesota student publication who turned down the work of a Minnesotan by the name of Robert Zimmerman, or as someone who jammed with a former refugee from that state known as Bob Dylan – the two being one and the same. What they probably don’t know him as is a fictionista – and yet, here he is in that guise.

Well, if you don’t know Amabile as a writer of fiction, you’re about to. How can you resist someone whose first story in this collection of seven, “Sammy’s in Love,” focuses on a young Sister Margaret, the nun who decks a student with a right cross and who causes her other male students to have wet dreams about “a blonde in her twenties whose pubic hair peeked out from the hem of her black one-piece” (11)?

The short story is its own art form, one that requires a quick getaway. As E.L. Doctorow said, when attempting to write a note for his daughter excusing her from school due to a virus: “Writing is very difficult, especially in the short form.”

I can remember watching adaptations of the stories of O. Henry on black-and-white television that caused me to seek out his books at the local library. Over the years, there were others who would capture my imagination – most recently Raymond Carver and Donald Barthelme; the former, with a touch of O. Henry thrown in, reminding me of Amabile.
The second story, “Pony Express,” concerns a ten-year-old kid in an Italian-American community sometime in the 1950s, who is sent with a beer bucket by his nonno, or grandfather, to the local pub to get some beer and fantasizes on the way that he’s a Pony Express rider.

These two stories demonstrate two ways to make that quick getaway. The first line of “Sammy’s in Love” is “The first truly religious event I ever witnessed . . . well, maybe not the first, but the most impressive, was disguised as a fist fight” (11). The lure of the tale is impossible to resist. Who isn’t going to want to witness, or at least read about, this religious scuffle after such a dramatic opening? The second sentence abruptly changes nuance: “Whenever relatives came to visit they would always ooh and aah and ask the same stupid question” (17). The reader is left hanging on the nature of that question. Having had their curiosity ignited, they must read on. Two ways of intriguing the reader and getting them involved quickly. Amabile is a master of the short-story format, as he demonstrates in various ways.

But once you get the audience in, you have to offer them something that’s going to make them want to stay, and Amabile does that remarkably well, with passages such as the following from “Blue Eyes, Cryin’ in the Rain.” The story, as with all those included, is about a group of Italian-American kids growing up in an unidentified city in the US. In this particular one, the hero (who is probably Amabile himself, as he introduced the character in an earlier story using the name George Amabile), induced to show off in front of his friends through the offer of a dollar, swipes a Stillson wrench from his father’s tool shed. He uses the wrench to remove the cap from a water hydrant, which allows the neighbourhood kids to cool off during a summer where “by eleven a.m. the asphalt on our street was so soft you could carve your initials, or the titles of movies banned by the Catholic Church, with a stick” (45). That, by the way, wasn’t the excerpt to which I referred. It was this one:

Skinhead, Weasel, and The Hamburger Kid took turns pressing their butts against the powerful stream with their arms behind them, fists gripping the two side nozzle caps, and spraying a splayed arc of dazzling, icy water over their backs, a rooster tail that arched up into the hot sky and came down like a cataract hammering huge drops onto the pavement. Bathers of all ages and sizes and sexes and shapes danced, and yelled, and tumbled into each other, their faces held up with closed eyes, mouths open, drinking, and dribbling, drenched with cold, their arms and upper bodies covered with flowing skins of  wet that shone in the sun. (49)

What is immediately brought to mind, if you are lucky enough to have seen them, is the adventures of Alfalfa and the rest of the cast of The Little Rascals. The twists and turns of these two elongated sentences capture the image of children cavorting in the sun. They also demonstrate Amabile’s poetic talents, which infuse all his writing in this collection.

The short stories in this collection are just that – short. None is more than ten pages long. All, that is, except for the last piece, “Small Change,” which would more properly be described as a novella, running as it does to nearly one hundred pages. I’ll leave that to the reader to discover.

As much as I enjoy Amabile’s poetry, I may like his prose even better. Discover for yourself. He has recently, after a number of years of quietude, released a new poetry book. Now that he has stirred things up again, both with poetry and prose, you can discover which you prefer. p

John Herbert Cunningham is a Winnipeg writer. He reviews poetry in Canada for The Malahat Review, Arc, The Antigonish Review, The Fiddlehead and The Danforth Review, in the U.S. for Quarterly Conversations, Rain Taxi, Rattle, Big Bridge and Galatea Revisits, and in Australia for Jacket.