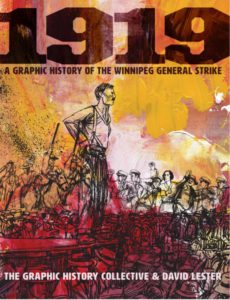 2019 marks the 100th anniversary of the Winnipeg General Strike.

The strike lasted 42 days, involved around 35000 workers, and took place in the shadow of both widespread strikes in North America and worker’s revolutions in Russia and Germany. It represents undoubtedly a foundational moment in both Canadian labour and political history, leading to both labour reforms and political organizing—the Co-operative Commonwealth Federation, forerunner to today’s New Democratic Party, was among the inheritors of the strike’s legacy. The echoes and aftershocks of the Winnipeg General Strike and, indeed, the inciting issues continue to shape the political economic lives of the peoples of Canada.

Despite this legacy, however, the Winnipeg General Strike is an often misunderstood event, reduced, as James Naylor notes in his introduction to 1919: A Graphic History of the Winnipeg General Strike, to the singular image of an overturned streetcar. This reduction of a complex historical moment to a singular image has the effect of emphasizing the violence that occurred while erasing the reasons 35000 workers took collective action. 1919, the new comic from the Graphic History Collective and artist David Lester, seeks to correct this, to expand the reader’s understanding of the Strike because, as the foreword notes, “[h]istory is an important resource for people who want to change the world.”

1919 succeeds in making the history of the strike accessible to a wide audience. It works to lay out the context, the timeline, and the outcomes of the spring of 1919 in a clear and unambiguous way. Part of this is an effect of the comic’s layout. Early pages consist of one or two frames at most, taking on an almost poster-like quality that allows both the kinetic qualities of Lester’s art—the inking in this book is particularly effective—and the declarative nature of the writing presented in short captions to work upon the reader. This establishes the key themes and ideas of the book early on. The strike as mass movement, its connection to both the colonial histories of Winnipeg and the First World War, even the fact that it is not an isolated event but rather part of a wave of worker’s struggles, are established through these pages. It also shows an important awareness of the formal qualities of the comic book and how they can be deployed: the number of frames per page increases as the action intensifies reproducing the tension of the Strike until the events of Bloody Saturday. When 1919 reaches that crucial moment it reverts to full page or even two page spreads, and the quality of Lester’s line work changes to mirror the confusion and the chaos with rough line work and overlapping images. That particular sequence of the book is arresting, shocking, beautiful, and tragic, and achieves that effect through the control the book as whole exercises over the disposition of the page.

This command over the medium as an affective tool does serve to highlight what might be read as either a limitation or asset of the book. 1919 is a work of history. It deals with the Winnipeg General Strike within that context, presenting a well-sourced account of the context, chronology, and legacy of the event. It includes reference materials, a bibliography, and an introduction by a historian. There is a clear point of view—the text unsurprisingly speaks the language of the left and the labour movement—however, good scholarship always deploys a critical lens and the text is positioned as a counter-narrative to more establishment friendly readings or erasures of the strike. The potential limitation with this approach is that the narrative itself can feel almost too didactic at points. Part of this can be attributed to the lack of a point of view character. The best graphic narratives about history—books like Art Spiegelman’s Maus, Chester Brown’s Louis Riel, or the graphic reportage of Joe Sacco—provide figures that allow the reader to project themselves into the narrative and form meaningful identifications. The vast arc of history is personified for the reader who then position themselves in relation to the narrative. There is no one character or figure that serves this function in 1919, and this constructs a distance between the reader and the text. That may, in fact, be the point as 1919 is identified as a graphic history rather than a graphic novel in the subtitle.

This entry was posted in Book Reviews, Graphic Novel. Bookmark the permalink. Both comments and trackbacks are currently closed.