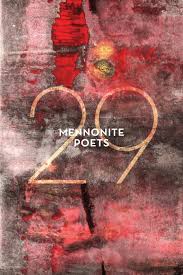 I am not Mennonite. Nor is Clarise Foster, the editor who curated 29 Mennonite Poets, the first comprehensive collection of Mennonite poetry since the publication of Half in the Sun: An Anthology of Mennonite Writing (Ronsdale Press, 2006) and A Capella: Mennonite Voices in Poetry (University of Iowa Press, 2003).

Like its predecessors, 29 Mennonite Poets mines the rich canon of Mennonite poetry. But alongside the expected work of pre-eminent Mennonite poets—Di Brandt, Patrick Friesen, Sarah Klassen—Foster places poems from a different vein, those whose inclusion, she admits, an editor of Mennonite heritage might question. She does this deliberately.

In compiling this special edition,” she writes, “it has been my task, as I see it, to dispel the expectation that aesthetically, Mennonite poetry remains inextricably preoccupied with certain prerequisite questions about identity, religiosity, and culturally requisite isolation. (p. 3)

Foster more than fulfills this task. The poems included in the anthology hint at the diversity of experience, identify and belief held by the poets, their contemporaries and their forbearers.

29 Mennonite Poets includes the work of 25 Canadian, and four American, poets. In reading their work, we travel through the Canadian Prairies and the Old World, Detroit and Montreal, Afghanistan and Mexico. We stand in kitchens and barns, Civilian Public Service camps for conscientious objectors, and war zones. We visit tight-knit communities, mental institutions, and Winnipeg, Manitoba’s storied North End. Along the way, we are reminded that there is more to the Mennonite experience than the stereotype of rural isolation, family and faith.

Throughout the anthology, poets question what it means to be Mennonite. But that is not the only identity these poems explore. For example, Fraser has included two poems written by Katherina Vermette, a Metis-Mennonite writer from Treaty One territory, who won the 2013 Governor General’s Literary Award for her poetry collection, North End Love Songs (The Muses’ Company, 2012) and her first novel, The Break, (House of Anansi, 2016), was shortlisted for the 2016 Roger Fiction Prize and the Governor General’s Award for Fiction.

In “Picture” (118), Vermette exposes the racism to which she and her family were subjected to while growing up in Winnipeg, Manitoba.

Foster also includes “Sansei” (90) and “Fume-e” (91), poems in which Sally Ito reflects on her experience as a third-generation Japanese Canadian. Something, she acknowledges, a Mennonite editor likely would not do.

A third poem by Ito, “Broken Things” (92), however, seems to bridge the gap between her Mennonite and Japanese forbearers. It speaks to the thrift and simplicity extolled by Mennonites as well as the Japanese practice of kintsugi: repairing broken pottery with gold. (92),

Thrift, some call it, that compulsion to save everything,
to still make it useful, but I call it grace—the way a person’s life can
sometimes be resurrected from the ashes of suffering or loss—
to gleam through crack, chip or tear
in hands that do not abandon.

The poems of Carla Funk, former Poet Laureate of Victoria, British Columbia, bare it all. They are fraught with domestic tension and religious imagery. In “The Test” (25), for example, Funk writes evocatively about the aftermath of a mother’s death:

On the shorn grass, the dress
lay like a body ruptured, like evidence
of a party after the guests go home.
Fingerprints on the doorknob, perfume in the hall.

The poems that resonate the most for me are those that reflect a sense of heimweh: a German word for a sense of longing akin to homesickness. Although I am not Mennonite, my history runs parallel to theirs. My ancestors were German-speaking Protestants who settled in the Russian Empire during the 18th-century. Like the Mennonites, they were lured there by Catherine the Great’s promise of farmland as well as freedom from taxes and military service. During the political upheavals of the early twentieth century, they found themselves starting over in the Canadian Prairies and in British Columbia.

I feel pangs of loss and recognition when I read about the “aunts with their thick legs/and the straining lawn chairs under the chestnut trees” in “Storm” by Karen Enns (17) or the ladies in “Geography” by Sarah Klassen who admonish the poet’s mother to speak English to her daughter. (95)

They can’t imagine watermelon fields rampant in September, a white fence lining the village street, blossoming apricot orchards that float pink clouds around my mother’s longing. They can’t hear the choir singing Grosser Gott, hoofbeats like gunfire. They are deaf to the wind that won’t stop moaning in the corners of her torn heart.

One cannot remain deaf to the rich diversity among contemporary Mennonite poets after reading this expertly curated yet unconventional anthology. Diversity not only in experience and belief, but also in style. From the innovative work of Nathan Dueck and Nikki Reimer to the more traditional poem, “Rachel on the Threshing Floor”, by American poet Julia Spicher Kasdorf, 29 Mennonite Poets is an engrossing and illuminating anthology for readers of contemporary poetry—regardless of whether or not they are Mennonite.

My one (minor) complaint is the presence of typos scattered throughout the book. Several mistakes jarred me out of the reverie invoked by deep reading of the poems. It is surprising and disappointing to find these errors in a book that has been conceived so carefully and designed so beautifully. (Bonus: the cover features a stunning giclee print by Deborah Danelley called Concealed Intentions.)

Shelley Marie Motz writes about culture, place and identity from the unceded traditional territory of the Songhees and Esquimalt First Nations. Her poems and essays have been published in print and online, in Room Magazine, The Timberline Review, Plenitude Magazine and the Globe & Mail. Her review of Rules of the Kingdom by Julie Paul also was published on Prairie Fire online.