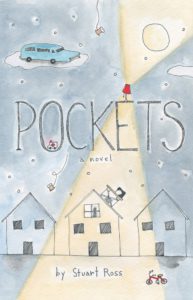 A seasoned writer of both poetry and fiction, Stuart Ross has melded both forms in Pockets, and has created a brand new experience for fans of both genres.

Though the title of the book is Pockets: A Novel, this book is not a novel in the traditional sense. Do not expect a straightforward plot, character arc, or anything else you’d expect from a traditional novel. If you’re looking for that kind of experience, you will be disappointed. Pockets is more like a collection of prose poems, pushing the definition of “novel” past the popular novel in stories form that has recently been explored by so many writers around the world, including Canadian authors such as Jenny Ferguson in her novel Border Markers.

In the acknowledgements, Ross explains that Toby MacLennan’s 1 Walked Out of 2 and Forgot It was a major inspiration for the novel. That inspiration is clear in the book’s structure, which creates a fragmented, surreal feeling that builds with each page.

The unique format of the novel is its most distinguishing characteristic. It is made up of bite-size moments, memories from an unnamed narrator. Each page is a new one, and most are only a few sentences, pushed to the bottom of the page so the majority of the book is blank space. This may be the evolution of the novel, what might be the next step after the novel in stories trend, but is more likely a structure that works only for rare books like this one.

The question on every reader’s mind when encountering a fragmented novel is, “Are the stories connected?” In the case of Pockets, while the pieces are not directly connected, each passage is a moment where some kind of connection is made. The pieces are untitled, so I will refer to them by page number. On page 8, the narrator sees his parents in bed, and then sneaks out of the house to visit their grave. The passage of time is not realistic, but shuffled by memories, categorized by topic—in this case connected by the category of parents.

On page 9, the narrator remarks, “It is marvellous how everything is connected.” And while the stories themselves aren’t directly connected, there are overlapping themes and characters that come together, allowing the reader to experience fragmented moments of one man’s life.

In another passage, he sees himself, in a sense watching his own memory. In a sense, this is what the whole book is about, each page a pocket of abstracted memory, distorted in its own remembering. “I passed the window of a house, where a small lamp threw light on the face of a boy lying in his bed, looking across the room and out the window. Just before he left my field of vision, I recognized the boy as me, peering out the window at his brother drifting by” (page 33).

The narrator’s brother is always floating through the sky, transient. His mother is perpetually sick. There is a dreamlike chronology from one page to the next, and even within each section. “Stevie pushed his pockets back into his pants, wiped the back of one hand across his nostrils, and disappeared from view. Soon his front door opened. He appeared on the porch. Then he was on the roof. Then he stepped out of his open garage” (Page 13).

Amid this surrealism, the pieces are grounded by pop culture and historical references, movies and TV shows, and current events—from Lawrence Welk to Kennedy’s assassination and World War II. The most realistic aspect of the novel is not in these references, however, but in the realness of the emotions it stirs. Many of the larger and weightier passages in the book focus on the trauma of the unnamed narrator losing his brother and mother.

Through these fragments of a life, Ross gives us snapshots of surreal moments, memories distorted by time and overwhelmed by emotion. And throughout these memories we begin to form a complete picture, we grasp something intangible that isn’t a traditional novel, but more of a feeling, an experience. And that transfer of experience and emotion is the function of all great novels. Pockets pioneers a new novel form, giving readers the opportunity to become the protagonist, to know what it feels like to be the singular person that is the culmination of all these moments and memories stacked on top of each other, each one distorted by the last.

Will Fawley holds an MFA from George Mason University where he was assistant fiction editor for Phoebe Journal of Literature and Art. His fiction has appeared in Parallel Prairies, Unburied Fables, Expanded Horizons, The Northern Virginia Review, Another Place: Brief Disruptions, and Sassafras Literary Magazine, and his book reviews have appeared in Prairie Fire, The Winnipeg Review, and As It Ought to Be.

This entry was posted in All Reviews, Book Reviews, Fiction, Poetry. Bookmark the permalink. Both comments and trackbacks are currently closed.