These stories are short enough to be read in one sitting, or read aloud.

Seth’s illustrations throughout are in keeping with the spooky subject matter and add a little something extra to these short stories.

Once again, the suspense and fear do the heavy lifting. These stories don’t contain foul language, gore or gratuitous violence. These are Victorian ghost stories, after all.

This year’s stories are: 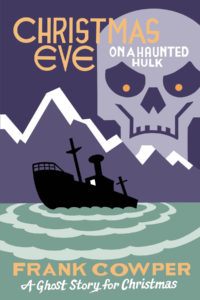 Christmas Eve on a Haunted Hulk by Frank Cowper

While out hunting ducks in a marsh, an unnamed narrator discovers an old shipwreck. While exploring, the man quickly realizes the mooring line of the duck punt he used to get to the shipwreck has snapped and he is now stuck. Alone, and with nighttime and rain quickly falling around him, he seeks refuge in the bowels of the ship, and, soon realizes, he isn’t alone.

Christmas Eve on the Haunted Hulk has great pacing and suspense leading up to the climax. The story lets the darkness of the ship’s hull and the sounds of the creaking ship build the atmosphere and suspense. 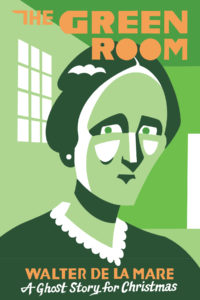 Alan loves to spend his days perusing the wares of Mr. Elliot’s bookshop. So much so, that Mr. Elliot grants him access to a private collection for favoured customers. While exploring this new plethora of books, Alan becomes increasingly aware of a presence watching him, and trying to get his attention. It becomes obvious that the presence is of the ghostly variety and that it wants something from Alan. Alan feels compelled to return to the store again and again, and knows that compulsion will not leave him, until he does what the spirit wants.

The Green Room takes its time to set up characters and atmosphere. While the action drives the story, the setting, and the mood-building tension is given its own space to grow. It should be noted, The Green Room is also the longest of the three stories, coming in at 92 pages. 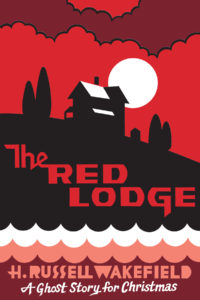 A young family rents a beautiful Queen Anne house for the summer, hoping to have a restful vacation. Unfortunately, the house, and its ghostly occupants have other ideas. As the family tries to enjoy their summer, they discover patches of green slime throughout the house, and see figures moving in the windows, and ahead of them in the halls of the home. As time goes by, these figures become bolder, and more terrifying. Will the family be able to make it through the summer? Or will their fates be the same as several of the previous occupants?

My personal favourite of the batch, The Red Lodge, has the quickest pacing and the paranormal ‘characters’ of the story are a lot more active than their counterparts in the other two stories. These paranormal entities are very active and are not subtle about their intentions. Because the characters are so active, however, there is less suspense overall.

All three books are ‘stocking stuffer’ sized and small enough to fit comfortably in a coat pocket if you want to read them outside around a campfire.

While yes, these are ‘Ghost Stories for Christmas,’ they aren’t Christmas focused, so they can be enjoyed year-round, or tucked away with the holiday decorations and brought out each year for some spooky holiday fun.

Lindsey Childs is the Assistant Editor and Book Reviews Editor for Prairie Fire. She normally edits the book reviews, but occasionally snags a book off her overflowing ‘to be reviewed’ bookcase and does a review herself.