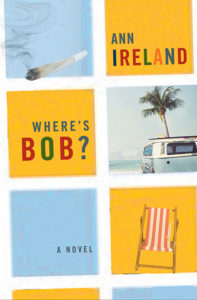 Ann Ireland is an acclaimed author of five novels, which have received and been shortlisted for numerous awards.

Her first novel, A Certain Mr. Takahashi, was adapted into the 1991 film The Pianist, and is perhaps one of her most famous works. There is no doubt Ireland had more stories to tell, but sadly, she recently passed away, leaving us with her final novel, Where’s Bob?

The book is divided into two separate storylines. The first is about Lydia and her mother Iris, who are staying at a Mexican resort called the Pirámide. The trip is an escape for both of them, and for Lydia it is an escape not just from winter in Toronto, but an escape from the fact that her husband recently left her.

The other narrative follows Martina, a famous Mexican TV host. She is married to Alejandro, a candidate for state governor, who we come to learn is on the ballot thanks to Martina’s popularity.

This focus on two characters, a Canadian and a Mexican, is important because a central theme of the novel is the contrast between the tourist resort full of rich Canadians and Mexicans and the real Mexico which is ruled by poverty and corruption.

But what of Bob, the title character? Iris and Lydia first see him in the resort restaurant, where he stands out from the crowd of tourists. A constant fixture at the resort, Bob seems to be a link between the easy life of the resort and the grit of the “real Mexico.”

Soon after this meeting, Lydia approaches Bob to buy weed. She knows it’s dangerous to get involved with drugs in Mexico, but it’s the only thing that relaxes her and allows her to sleep. Over time, Lydia gets more involved with Bob and it becomes clear that drugs aren’t the only thing she wants from him. Bob is the opposite of her ex-husband. He is a bad boy, dangerous and mysterious—word around the resort is that he works for the DEA, despite his reputation for selling drugs to tourists as a ‘public service’ to keep them from getting into trouble with the real Mexico drug trade.

Bob becomes Lydia’s window into the real Mexico, making her question the choices that led her to grow closer to this mysterious man. It’s through Lydia’s preoccupation with this potentially dangerous character that we get a glimpse of the title’s significance. But ‘Where’s Bob?’ isn’t the main question in Lydia’s mind. A more apt title may have been ‘Who’s Bob?’

Though Bob is a central character, there is still the other storyline to consider, and both plots converge early in the novel. Lydia meets Alejandro and Martina while smoking a joint on the beach at night outside the tourist area. At once the characters are in conflict. “It is you people,” Martina says, “that cause problems in our country. If you didn’t buy drugs, we wouldn’t sell them. And we would not be in such a mess.” (62)

Martina’s words are one of Lydia’s many warnings. Throughout the novel, we learn that she finds herself in this somewhat reckless state of mind that leads her to get involved with the dangerous parts of the real Mexico because she is tired of being passive, of being the one who is always left behind. Not just because she was left behind by her ex-husband, but also because her mother Iris left her when she was a child. Along with the contrast of the fake tourist Mexico and the real one, this theme of leaving is the focus of the novel. In a sense, the whole novel takes place while Lydia is in the act of leaving, trying to forget her life in Canada. Mexican tourist life is an escape, letting Lydia be the one who leaves for once in her life.

An expert of her craft, Ireland doesn’t just portray this theme from the perspective of the one left behind, but also explores the impulse that causes people to leave others behind. “I’ve made a point of always being the one who leaves,” Iris says (65). Iris is bored by the mundane and is always seeking the next adventure. But seeing Lydia’s pain, she wonders if she should explain why she left Lydia’s father. “Should she let her daughter know about her relationship with Richard, how he was always holding her back, insisting on following the stifling routines of daily life? The adventurous young man she’d travelled with all over Mexico had gone back to school and become a tax attorney. He insisted they join the golf and country club! It would have killed her to stay with such a man.” (66)

To Lydia, however, being left behind isn’t something that can be explained away, it isn’t something that happened to her once, or even twice, but is a recurrent theme throughout her life. “Her mother’s absence had the old effect on Lydia: she felt herself tighten, never sure whether Iris was gone for days or weeks—or had stepped out on an errand. She would trot up the front steps of the house in her high heels, late and often breathless, having forgotten about her daughter’s dental appointment or the parent-teacher interview; her own life was far more dramatic and complicated than a mere child’s. (83)

Where’s Bob? is a novel full of contrasting characters who show us the depth of the book’s central issues, written by a woman who grasped the Canadian experience in a global context. Ireland has captured what it means to overcome the past and become the one who leaves. And in a sad, beautiful way, that is exactly what the writer herself has done by leaving us with her final work.

Will holds an MFA from George Mason University where he was assistant fiction editor for Phoebe Journal of Literature and Art. His fiction has appeared in Parallel Prairies, Unburied Fables, Expanded Horizons, The Northern Virginia Review, Another Place: Brief Disruptions, and Sassafras Literary Magazine, and his book reviews have appeared in Prairie Fire, The Winnipeg Review, and As It Ought to Be.