Annie Muktuk and Other Stories by Norma Dunning

Annie Muktuk and Other Stories by Norma Dunning 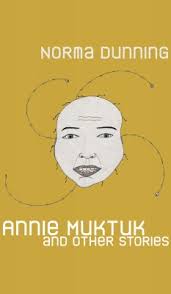 Stories are meant to be told, to be absorbed, thought about and laughed over. Appreciated.

They float in the air like will o’ wisps, waiting for the storyteller to reach out and grasp them. It is then and only then that they become solid, and are given meaning.

Norma Dunning’s debut short story collection takes us out of our mundane lives into one that is raucous, humorous and spiritual. She also leads us into a world where the indigenous seem apprehensive of the white world. But all is not what it appears to be.

The author brings the stories from her culture to resonate and find importance in the land of literature. Dunning has written a powerful book, the short stories depicting the way of her people, how they once lived and now live in the presence of the white world. She regales her audience with tales funny and sad, harrowing yet uplifting. But most of all she places the stories on the page to show that she and her people matter.

In the first story, “Kabloona Red”, Dunning’s character starts drinking and smoking soon after her husband leaves for work. Each day that he is absent she remembers her harrowing experiences at residential school, her continual rapes at the hands of the priests, her endurance during the six years she spent in the institution. Dunning’s writing of these incidents reminds us of the havoc generated through violence, and how it leads to permanent damage. As her character says near the closing of the story: “You never really get over things. You just move one. Move on to laughter. Move on to being alive. Move on to growing old.” (5)

Her story, “Manisatuq”, introduces Annie Mukluk who tries not to get lost in the white world but she often is. She survives by using sex to her advantage. She says, “Sex is the only thing that I do very well. It gives me power. It gives me strength. It bring me a strange comfort.” (87) The spirit of her mother, however, visits her and tries to persuade her daughter to give up this way of life and go on another path. “You need to rest your head into the same man’s arms each night”. (91) It is not until several stories later that Annie reaches another plateau in her life.

“Road Show Eskimo” shows an Inuk woman who appears to be under a white man’s power. She goes on stage and does a show according to his instructions. With the re-release of the book they’ve presented over the years, she decides to play him like a hunter trapping a rabbit. She wears the traditional amauti, worn and faded through the years, and then paints a tattoo on her face. She cannot find the special ring he wants to wear so he puts on a Walmart ring, “the cheap proof of their pretend life together” (44) Then she outwits the man at his own game.

There are more stories, stories of Moses Henry, Johnny Cochrane, Annie and others. They are full of Native humour, full of knowing. They are stories full of survival despite the cruelties experienced in the characters’ lives. The story that I found most moving in this wonderful collection is “My sisters and I”. It begins with the narrator telling us of an Inuk family finding happiness on the land. Then a sudden disruption of their life there and the sisters are wrested from their family and sent to a residential school. The strangeness and the cruelty are mind-boggling. “I don’t know who I am anymore”, says the narrator. (154)

The nuns imprison the sisters for disobedience. They no longer can use their names. Instead, Hikwa becomes Margarite, Puhuliak becomes Suzanne, and Angavidiak becomes Therese. In this strange white world, they endure the viciousness of Father LePage, each day hard and unforgiving. But Hikwa finds kindness in Bishop LaFlamme and the other two sisters have a friend in Joshua, the young woodcutter.

Dunning’s rendering is a way of stating that Annie Mukluk and the others are alive. They are present and do not intend to disappear.