Looking for Light by Susan Ioannou

Looking for Light by Susan Ioannou 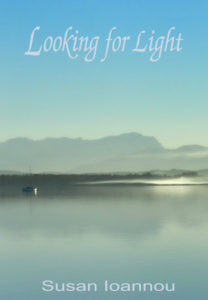 Susan Ioannou’s Looking for Light charms and delights. It also feels like a final statement, as if it’s a summing up and a glancing back across the creative process. Chris Faiers’s Foreword suggests one pathway into the three sections of Looking for Light. He emphasizes the Muse as a demiurge guiding the poet’s hand, and he rejects scholasticism or anything associated with universities or colleges (though Ioannou has longstanding ties to both). It’s tempting to remember Batchelor’s well-intentioned distinction between the Movement and the Muse-driven likes of Dylan Thomas, Mervyn Peake, and George Barker: “they are not dons, they are not deep poetry readers and critics and university teachers, they are bards.” With Faiers’s prompt, it’s tempting to search for the White Goddess and dig for tree alphabets. But it’s not the case. Ioannou’s emphasis on the personal, the everyday, and increasingly on recollection and questions as the sections proceed, made me constantly rethink bardic readings, eventually jumping off that path and cutting my own trail across the poems without the orange tape to guide me and without fixing her thoughts and experiences on or off campus.

Each of the three sections could reasonably stand on its own as an independent chapbook, and there’s a cohesion to each of the three that makes this appealing. “Part 1: Make It Beautiful” subverts Pound’s dictum to renovate, offering instead an opening gesture to the Muse that recall’s Graves’s search for the old always in the new, and the big ideas of beauty and love as poetry’s muses. This mood returns in “Part 2: Beyond Knowing” in poems like “Photon,” “God Particle,” and “Scientist” where intuition is praised above rationality. The theme resurfaces in the abundance of question marks across this entire section. The questions are relentless, but that’s part of knowing and living.

“Part 3: Passing Seventy” turns from queries to 19 poems on quotidian experiences of aging. “Mini Stroke” and “Eye Surgeon” stand out for their frank expression of the personal experience of what is also common and shared. However, closing this section with “Idea” turns back to the questions that dominate “Part 2” and its provocation of the Muse over Apollo. Ioannou seems to suggest that aging’s mortality is part of the same epistemological question marks of “Part 2, subverting first George Berkeley’s synthetic thought, then our digital world’s binary analytic paradigms, and finally a gestural questioning of quantum physics. She closes with another question:

Or is it
our own dreaming
undreaming we exist?

It’s more a mysticism and path of direct intervention from the divine. The gesture weds the volume’s focus on the Muse to the nature of knowledge (only in questions) and the practice of aging. The Muse seems as essential to living as to poetry.

There are kernals here as well, giving koan-like puzzles for the reader. “In Search of New Credos: A Gloss” puzzles in its ending, after “buffalo,” “Brave,” and “Raven’s wings”:

God hunts and fishes this New World. His line
hooks and flashes up that ancient Chain,
while we still shield our gaze, too civilized,
and wrest in things we cannot recognize.

Why this surprising imperfect rhyme? What does the denial of an anticipated resolution say about this God or many readers’ discomforts around the New World to which that God has come. Is this a demiurge of indigeneity holding “Europe’s spires” far away, and if so, what do we make of it here? And more to the point, is Ioannou marking her own discomforts around the “wilder” and “civilized” peoples in the poem? Each of the four preceding stanzas ends with a perfect rhyme after eight lines of unrhymed verse, and then in the closing of the poem, the reader confronts this formal challenge to what seems like another question meant as an answer. I can’t help feeling that this tells me not to trust my gaze, and that shielding my eyes blocks the gnosis the poem drives toward for its conclusion, not unlike a life.

Another challenge to how we “know” comes in Part 1’s “The kindly professor” in the long poem “Bagni di Luca.” The poem’s five sections contrast the yearning for an unreal or imaginary Romanticism and reality’s “muck” and “mud.” Traveller take heed! “Reciting from Shelley” heightens the tension between reality and travel’s anticipations, which have more to do with the traveller than the place. Ioannou turns this in the third section through deixis away from “the professor” to “you fix on the kindly professor” to tangle readers into this adventure. We finally take on his role:

At last, you turn off the highway to find
from guidebook phrases long memorized
“the countryside dotted with villas”,
and slithering down toward Devil’s Bridge
face Shelley’s once exquisite view
flooded—a valley oozing muck,
plastic bags, and shreds of paper

If I had a Baedeker, I’d toss it… The reality of working class industrial life amidst travel fantasies has the same troubled “knowing” that comes in the repeated questions. Anticipations fail, and in some sense anticipating what comes next is the struggle with the Muse who always brings the surprising and new.

Ioannou closes with “a massive door thud shut ahead” in an epilogue, “The Choice.” It’s a Prufrock moment, “and yet heard the distant voices singing”—by drawing, they sing for her. This is the “catch-nail” of the collection hanging before the thudding door. She sets the nail as “love”, in a caesura, that “words hang themselves upon.” The image haunts with words left behind the poet after the final exit, but in its image words are like any coat and hat, hung up to dry after being out in the rain and muck and mud of the world after finally coming back home. Rather than death as departure, she casts it as return, and the poetry as the nature-lover’s diary of a perambulating life. With poetry as her light, and darkness, in the opening line, Ioannou admits to solving her title. Looking for Light becomes light found, but the point now seems less her search than the reader’s.