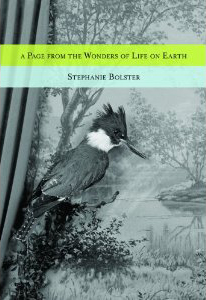 In A Page from The Wonders of Life on Earth, Stephanie Bolster uses startling juxtapositions as a means for irony and to perceive the world from jagged, deconstructing angles. Although her milieu is urban, birds and animals, frequently from a zoo setting, inhabit her verses. In “Comfort,” the Spanish man who rides the metro “open-palmed” is presented in terms of a chimpanzee while he “deliver[s] a discourse on his poverty” and “puts his face to the chimpanzee’s glass” (16) :

If he took this city by the neck
and shook, would the strand break,
pearls roll into corners?

Bolster’s verses are riddled with oddball associations and references. Here, the image of pearls rolling into corners before the man recalls the biblical “pearls before swine,” but the poem also evokes Ezra Pound’s famous “In a Station of the Metro.” Whereas faces are presented as flowers in Pound’s poem, the metaphor takes a new angle in Bolster’s poem while a stream of faces are visualized under the concrete as seen from above.

A key to reading this collection may be embedded in the title poem. Here the sheer randomness of exotic animals with characteristics normally associated with another species, such as the porcupine with the monkey-like “prehensile tail” and the “crab-eating raccoon,” force the reader to view the world with an open-minded incredulity. Accordingly, we are taught to free-associate, as a leap of faith, between images and what they may suggest:

Only in the blackness does the great horned owl
soar silently through dim arcades. (70)

That this great hunter and devourer of prey from the natural world – traditionally the owl is a symbol for death – should be discovered in such a city setting suggests a dislocation and bodes ill both for civilization and for its own survival in an environment without food.

Not surprisingly, considering the similar expressionist effects and almost Dadaesque approach in both Sylvia Plath’s and Bolster’s poetry, the latter includes a poem on Plath’s suicide. In “London, February 1963,” Bolster renders a winter scene in a London zoo in a way that jolts the reader into a kind of clairvoyance:

In a nearby flat, the poet thought
this was the world. Left the children
bread and milk and turned
the knob that turned her off. (51)

Rather than the “eye of the beholder” becoming “I,” as urged in the poem of that title (“Eye of the Beholder,” 28), the speaker here appears to pass judgement on Plath’s lack of vision in mistaking this specious city scene for the more spacious world. Nonetheless, I detect a sympathy in Bolster’s collecting of details, including Plath’s leaving out “bread and milk” for her children before an exquisitely engineered suicide (perhaps “rehearsed” is the better word, since in her mind the hope that her husband might discover her body before she died may have existed – but here I tread on toes of Plath’s advocates). In view of a theme of short-sightedness evidenced in many of the poems, Plath’s lack of proportion in this final life/death instance may be taken for the world’s.
Two poems with intriguing surreal effects include “Amsterdam” and “Rainbow,” both of which include birds in a city setting. In “Amsterdam,” the “six yellow splatters” in the snowy owls’ cage are seen as casualties, while the owls “stare skyward” as detached godlike figures removed from this “grief.”

Rather than an intrinsic state, “damage” is seen to be determined by perspective, since for the snowy owl the “yellow splatters” are food, and the birds’ deaths not considered a tragedy from the point of view of the one that must eat them to survive. With the question “If the owls,/ famished, swallow it, whose bones/ will they cough up?” the poet not only emphasizes the chilling anonymity of death, but also brings up the question of moral responsibility. “Who will answer.” The latter is not even a question.

Another provocative poem, “Rainbow,” implicates the poet’s morality in choosing to write about these atrocities, ingesting them and then spewing them out in a poem, as it were. Inside a “six-month plover’s gut,” the “last hundred things it ate” are clinically photographed, including “dead/lighters, crushed glass, cigarettes/ until no room.” “We do wrong,” the poet comments on this evidence for civilization’s destructiveness, while its wonders – trinkets and toys – choke out life itself. But with the poet’s confession of love for the city and the urban way, our own ambivalence is given a valid voice:

Five times the fish says yes to the hook,
no to the tug, five times keeps
what’s given, and so the poet lets it
go (into wallpaper, similes,
feathers) into the greasy
rainbow. (67)

The moral problem that arises, namely whether art, by expressing the problems of the world, “cancel ruin” is pointed. The final question, “Who am I/ to gulp the world and live?,” poignantly reveals the artist’s dilemma and ultimate incapability to rectify the world or even consider doing so.

A Page from The Wonders of Life on Earth presents a surprisingly unsentimental and disinterested account of the dilemma of both everyman and the artist as they face civilization’s superimpositions on nature, choking out its life force. Although Bolster applies a listing reminiscent of biological taxonomies (random and fantastical as the animals with mixed-species traits she includes in the title poem), and even suggests a Darwinian survivalism, that vision is ultimately as endangered as the plover’s stomach filling with indigestible food that are the toys of civilization. As with Midas’ touch that turns all into flashy but inedible gold, the implication becomes that we are bound – if not doomed – soon to discover just how dysfunctional are the ways of our enthralling, strangulating civilization.

Gillian Harding-Russell has published three poetry collections, most recently I forgot to tell you (Thistledown, 2007). A chapbook, Poems for the Summer Solstice (Leaf Press), and a ‘holm,’ Stories of Snow (Alfred Gustav) appeared in 2011 and 2012.