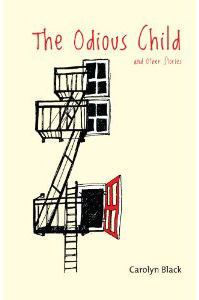 We have all likely heard the criticism that Canadian fiction is too aesthetically conservative: committed to realism, prudish, backwards-looking, and dominated by small-town settings. Our dominant author of short fiction, after all, is so identified with small-town Ontario that the rural countryside beyond Toronto is known as Alice Munro Country.

These three collections of short fiction – two by first-time authors – are a sign of the growing resistance to this aesthetic.

With her elements of fantasy or magical realism in a world of pop-culture-saturated urbanites, Carolyn Black at times resembles Zsuzsi Gartner, whose collection Better Living Through Plastic Explosives was shortlisted for the 2011 Scotiabank Giller Prize. Black’s collection, The Odious Child and Other Stories, is concerned with social game-playing and posing and the loss of selfhood in a world where we market ourselves online and we are what our labels say we are.

Two of the stories that have been printed elsewhere, earning publication in the Journey Prize Anthology and an honourable mention in the National Magazine Awards, deal with the peculiar soullessness of modern dating. In one a woman dates a “beautiful man” she selects online and suffers an attack of existential nausea. In another, a woman meets a man in a speed-dating encounter and can’t decide if the man is a serial killer or a criminologist interested in serial killers.

In both of these stories, she suggests that modern life is reducing people to numbers or brand images. The woman in “Serial Love,” the speed-dating story, knows the men she is meeting only by their number and while on her date thinks back to her past boyfriends, who are also only identified by number. In “At World’s End, Falling Off,” it’s significant that the woman narrator and the beautiful man have both selected Internet dating names that are highly misleading; she logs on as Country Wife (after the 18th-century play) and his profile is identified as Happiness.

Another story of relationships, “Games,” deals with a woman thinking about the men she has dated, identified as “the poet,” “the sketch comic,” and “the yogourt maker.” There’s a sense here that modern life strips people of their identity beyond a simple label.
An almost drugged passivity runs through the stories. Few characters are named. Even fewer seem to have what we might think of as normal emotional responses. After all, the woman in “Serial Love” decides to go on a date with the potential serial killer, reasoning that if she is “willing” she’ll be safe.

Characters respond in a similarly passive way when several of the stories take flights into the magical. In one, rather cleverly, a woman’s head separates from her body in response to a doctor’s casual reference to a kind of mind-body dualism (“The doctor continues ‘Bring yourself in for more tests,’ as though her body is a misbehaving dog that she hauls around on a leash.’”). Both the woman and her gynaecologist partner react calmly to the change. In a darkly comic note, Black describes the partner awkwardly trying to make eye contact with the severed head while having sex with the body.  The story, titled “Hysteria,” is a satire of ideas of illness: that illness is real if it’s in the body, but not if it’s “all in your head.”

Black responds to readers who might be hoping for a more typical narrative arc in her story “Martin Amis is in My Bed.” In this, the narrator has grown bored with her own writing and sets aside a story she has been working on, which “contained potted herbs, moments of meditation in a kitchen and a final psychological revelation that was not meant to be a surprise but, rather, a reaffirmation of some comforting tidbit of wisdom that I assumed the reader already possessed.”

Rather than providing psychological revelations that comfort by tying up loose ends, Black alludes to larger issues in society that strike a chord with the disorienting events of her stories.

In the title story, a woman is hiding a feral child in her apartment. She doesn’t know where the child came from and isn’t particularly curious. “I have never tried to civilize or understand the child and I have no interest in reflecting on its origins (although, certainly, I did not give birth to it). We so rarely understand ourselves, let alone others.”

The narrator in The Odious Child is more interested in playing what she calls “the neighbour game,” making plans for a wine and cheese party and attempting to keep the feral child from disturbing people in her building. It’s significant that the narrator’s problems with the odious child take place against a backdrop of a police overreaction to a demonstration, which appears to be modelled after Toronto’s G20 experience. The woman isn’t any more curious about the origin of the noise in the streets than she is about the child. Is the child a metaphor for what is repressed in ourselves and our society? Black doesn’t give us easy answers in this story or in her others. 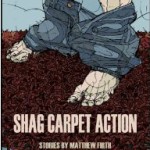 Matthew Firth’s Shag Carpet Action is a varied collection, including everything from a less than two-page story about a youthful sexual encounter (“Shag Carpet”), to a novella about conflict within a Hamilton city workers’ union. Many of the stories are set in Hamilton, but others take place in Toronto, smaller Ontario communities, and Dundee, Scotland. Male and female, youth and adult perspectives are used.

This is the Hamilton-born Firth’s fourth book. As founder and co-editor of Black Bile Press, Firth clearly is a writer who wants to vent strong emotions. And there’s a lot of that in this book. The transgressive tone is set in the opening line of the first story: “She masturbates with an action figure –a Spider-Man about eight inches long, missing its arms.” That story, “Action,” is told from the point of a view of a bored, middle-aged woman who uses her binoculars to spy on the neighbours. It’s not the last icky sexual encounter in the story. In “The Lunch Program,” a pubescent boy fantasizes about devouring the slightly older sister of a friend.

The most compulsively readable story in the book is the final novella, “Dog Fucker Blues,” a sort of anti-heroic, drug- and stripper-saturated answer to In Dubious Battle or Waiting for Lefty. It would be a stretch to say the story is elegantly written – characters, especially the thuggish villain of the piece, are mostly one-dimensional – but it grabs you by your lapels and commands your attention.

Firth, who works for a national union, brings a working-class perspective to his stories that we don’t often get. And in keeping with this perspective, he eschews the kind of smoothed-over, workshopped-to-death sheen many other authors give their stories.

As a result, language and voice are sometimes inconsistent, as in this section giving a third-person view of a biker-associate, drug-dealing garbageman: “The Diamonds cannot afford any sort of slowdown in their business or any fuck-ups with whom they do business.” Not only is that a clunker of a sentence, that “with whom” takes the reader right out of the thug’s head.

In its very inelegance, not to mention the graphic sex and the decision to give the word “come” its porny three-letter-word spelling, Firth’s book is another challenge to all those stories of potted herbs and neat psychological revelations. 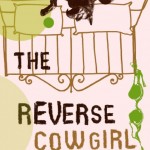 David Whitton’s first book, The Reverse Cowgirl, combines all that is best in the above two books with finely crafted sentences, a delightful sense of humour and a wonderful imagination.

Again calling to mind Zsuzsi Gartner, who selected one of Whitton’s stories for her recent speculative-fiction anthology Darwin’s Bastards, Whitton mixes elements of fantasy and speculative or science fiction with both satire and straight-ahead storytelling.
But where these fantasy elements sometimes seem like dramatic dead-ends in both Gartner’s work and in Black’s The Odious Child, in Whitton’s collection they enrich the stories. The opening story, “Gargoyles,” for example, appears at first to be just a well-drawn character study about an encounter between a former high school loser made good and a former high school queen made bad. But the fantasy element – the woman’s downfall came after a gargoyle fell off a building and inflicted a brain injury that allowed her to read people’s futures – makes the story even more compelling and adds a couple of additional layers of irony.

The title story is another that makes excellent use of speculative elements. In it, a self-centred hipster is dumped by his hipster girlfriend while on a trip to Paris and then takes up with an Albertan country music fan during what appears to be a storm of mini-black holes. The black holes, which look like soap bubbles, cause the two to continually jump back in time. (Cleverly, the reverse cowgirl refers both to a sexual position and to the hipster’s efforts to turn back time with his cowboy-boot-wearing sex partner.) It’s hilarious and fast-paced but also a thoughtful look at the impossibility of pressing reset in our relationships.

Imaginative as he is in his use of fantasy and science fiction tropes, Whitton stands out even more as a wordsmith.

There are many jumps into characters’ minds that convey attitudes or impressions succinctly and memorably: “He possessed happiness, he really did – the problem was he couldn’t access it”; “It was around this time, I recall, that I was crying often and without provocation: in the middle of football games, or during sitcoms, or, once in the middle of a denture cream commercial that had struck me as especially poignant”; “He looked impossibly delicate, like a ceramic figurine. The Royal Doulton version of a drunk insurance man.”

Like Firth, Whitton tries to get away from the teacher/writer/creative class social environment of many Canadian authors. One of his stories, “The Lee Marvins,” depicts a pair of tow truck drivers who romanticize themselves and their late-night forays against illegally parked revellers in the club district. Two others involve characters who work with concrete.

Concrete sets up one of the most delightful scenes in the entire book. In the story “Bus Bunnies,” an inattentive husband hasn’t noticed that his wife is having an affair because he’s been too focused on his concrete business, especially on a new concrete sealant that “Protects against alkali damage, capillary seepage, and dusting. Protects against scaling and spalling.”

When he is informed of his wife’s betrayal, he falls to the recently sealed floor of his garage and: “It gave him not the smallest satisfaction now to see that there were no signs of dusting, scaling, or spalling.”

This mastery of specialized vocabulary and the rhythm of words makes each page a delight. Added to that is a wicked sense of the absurd that allows Whitton to conjure people and situations that are just a few degrees off from our daily lives. He creates a subculture of bus driver groupies in the story “Bus Bunnies” and drolly satirizes higher education from the perspective of the admissions director of a beauty school in “Where Did You Come From?”
But at the same time, it’s not all absurdity. Whitton clearly has fun creating his stories, but he takes his characters seriously and can put them in heartbreaking situations, as in the story “Raspberries,” in which an aging widow is being conned by a man who claims to represent her long-dead husband.
All three of these authors deserve credit for pushing the boundaries of Canadian short fiction. Whitton, in particular, with his variety of tones and his gift for language, has marked himself as an author to watch.

Bob Armstrong is a playwright and author of the comic novel Dadolescence.